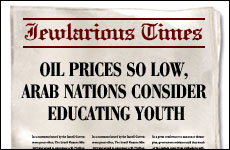 JEWLARIOUS SATIRE -- Members of the Organization of Arab Petroleum Exporting Countries (OAPEC) met in Kuwait last week to address a brewing crisis. The price of oil has dropped so low (from a high of $147 per barrel in July of 2008 to a recent low of $63 per barrel) that these 11 countries are now considering drastic measures. In an off the record interview, one OAPEC Minister told Jewlarious, "We are so terrified by this drop in oil prices that we may actually have to invest in forward looking industries and maybe even.... I can hardly say it.... educate our youth. After all, how else are we going to fund the terrorists of tomorrow?"

Attiyah told Jewlarious' Arabic sister outlet Al Jewlarious, "I categorically deny that we have any intention of educating our youth."

As soon as this comment was made public, several other OAPEC Ministers were quick to rebut this claim. Abdullah Bin Hamad Al Attiyah of Libya told Jewlarious' Arabic sister outlet Al Jewlarious, "I categorically deny that we have any intention of educating our youth. Oil would have to drop to $2 per barrel before we would consider anything of the sort." Meanwhile, Saudi Minister Ali al-Nuaimi called the speculation that the Saudi Government would shift the $1 billion it usually spends to support terrorism to invest in education, "nonsense." In an exclusive interview with Al Jewlarious, he stated, "Do you know hard it is to build schools -- to plan field day, hot lunches and get all of those arts and crafts supplies for mother's day and chauffer's day? It is so much easier to just turn off the taps again."

Still, Gholamhossein Nozari of Iran did not rule the education option out, stating, "We are considering and I stress considering educating our youth." Nozari continued, "Keep in mind, we have seen hundreds of universities being built all around the world for hundreds of years -- some good, some bad. We don''t want to rush into education and suddenly have a University of Phoenix on our hands. I mean, come on -- getting your PH.D in chemical engineering online? Who are you trying to kid? When our government needs a dirty bomb to ship to Hezbollah and still maintain our plausible deniability we need someone we can count on."

Flying High
Vayelech 5783: Regret and Repent
Rabbi Sacks: Focus On the Important, Not the Urgent
Put Your Foot Down: Are Human Feet Poorly Designed?
Comments
MOST POPULAR IN Jewlarious
Our privacy policy
Aish.com Is Looking for Great Writers