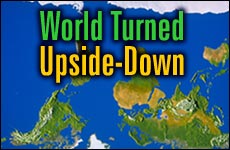 A survey of media praise for Israel's strike against the Hamas leader.

In the aftermath of Israel's targeted killing of terrorist mastermind Shekh Ahmad Yassin, media outlets across the globe castigated Israel for committing a 'crime,' while presenting Yassin and Hamas as heroic martyrs. A sampling:

The insult here to Christians (comparing a sadistic terrorist to Jesus) is at least as great as the insult to Jews. And Simanca is no small-time journalist: MSNBC'S Daryl Cagle deemed him 'Brazil's top editorial cartoonist.'

The grim spectacle of an ageing, wheelchair-bound invalid being slaughtered in cold blood is not new to the world of terrorism.

Almost 20 years ago, four heavily armed Palestinian terrorists hijacked an Italian cruise ship, the Achille Lauro, in the Mediterranean, taking hostage its 400 passengers and crew....they chose a sacrificial victim, 69-year-old Leon Klinghoffer. They shot him, and then pushed his body overboard, wheelchair and all.

The Age likens the mass murderer Yassin to a completely innocent American tourist. Down Under, has the world turned upside down?!

recklessness that seems bent on turning what was a national dispute over land between Israelis and Palestinians into a religious war between Jews and Muslims: what other outcome can there be from killing a leader in a mosque?

First of all, Yassin was not killed 'in a mosque' ― he was killed on the street. And The Guardian claims that this will render it a 'religious war' for radical Islamic Palestinian terrorists?! The conflict has always been understood by Hamas et al. to be between Muslim faithful and Jewish 'infidels.'

It's truly remarkable that on the very same day that US officials were being grilled for not eliminating Bin Laden before 9/11, Israel's elimination of a Hamas leader was broadly criticized. Cartoonist Mike Lester of the Rome (GA) News-Tribune captured this double standard:

Some examples of the American media getting it all wrong:

The Hamas cleric had a moral authority that motivated many to give their lives to kill others.

One shudders to consider the Times' sense of 'morality.'

● Knight-Ridder (printed in all their papers, nationwide):

The elderly, partially blind quadriplegic was the beloved leader of a popular movement to create an Islamic Palestinian state.

Knight-Ridder, while fawning over this 'beloved' man, should be reminded of Hamas' idea of a Palestinian state (from the Hamas Covenant): "Israel will exist and will continue to exist until Islam will obliterate it, just as it obliterated others before it." And as Yassin said in 2001, "All of Israel, Tel Aviv included, is occupied Palestine. So we're not actually targeting civilians."

Like other Islamists, Hamas carries a fundamental animosity toward the US and western civilization. The notion that the US previously enjoyed a quiet day in the park vis-a-vis Islamic terrorists is simply absurd. Indeed, soon after 9/11, under the headline "US Turns Against Hamas," the Guardian reported on the US government crackdown on the Texas-based Holy Land Foundation, a funnel for Hamas funds. This, they reported, "served to blur the distinction between the Bush administration's 'war on terrorism' and Israel's military retaliation in Gaza and the West Bank."

And note that over the past decade, Hamas has been responsible for the murder of 38 Americans. The Hamas hornets have been stinging Americans for some time.

On the other hand, numerous editorials came out in favor of Israel's action:

Israel scored a victory in the global war on terrorism Monday by finally dispatching Sheik Ahmed Yassin...This man was as evil as they come, a spiritual brother of Osama bin Laden. He worked to subvert every attempt to bring peace to the region and had openly committed himself to the destruction of the Jewish state. Yassin was not a political leader; he headed a terrorist organization. There is no distinction between what Hamas does in Jerusalem and Tel Aviv and what al-Qaeda did in New York on September 11 and is suspected of doing in Madrid earlier this month. Yassin got exactly what was coming to him. Israel owes no apologies for his death.

Being "spiritual leader" of Hamas is not like being the Archbishop of Canterbury. Ahmed Yassin was a Godfather of Terror, the man who founded the Palestinian killing machine and the inspiration for more than 50 suicide bomb attacks on Israel. Critics of Israel say that country has aborted the peace process. They're wrong. Over the years Palestinian bombers have repeatedly blasted peace hopes to smithereens - taking hundreds of innocent Israeli men, women, and children with them. Why did Foreign Secretary Jack Straw go weak at the knees over Yassin's death? He said Israel's action was "very unlikely to achieve its objectives." Wrong: it has achieved its objective because one more terrorist mastermind is dead.

Sheikh Yassin was up to his eyeballs in blood. It's hard to see how his removal from the equation is anything but a step forward for peace in the Middle East, at least in the long term. And a step forward for the rest of the world, as it will serve to remind would-be terrorists that some of their enemies fight back. Prime Minister Sharon had little choice but to take the action he took.

Sheikh Yassin's expressed mission was to destroy Israel and replace it with a fascist Islamic state - a paradise for those who enjoy stoning people for adultery, where women are discouraged from reading or writing, where there are few political or social liberties, and where the media are largely a propaganda machine, rife with exhortations to kill the Jews. Welcome to the Dark Ages. When one side's aim is the destruction of an entire state, and the other side has the effrontery to try to defend itself, mayhem is inevitable, but appeasement makes matters worse.

Hamas founder Sheik Ahmed Yassin was the Osama bin Laden of Palestinian terrorism. By assassinating Yassin, the Israelis just applied the Bush Doctrine to one of the most deadly terrorist leaders on the planet. In the winner-take-all war on terror, countries are either with us or against us. They either take decisive action — even preemptive military action — to bring terrorists to justice, or they are guilty of aiding and abetting the enemy.

No one need shed a tear for the sheikh. No major Hamas bombing or missile attack on Israel was carried out without his personal approval. And there have been many. Sheikh Yassin was an enemy combatant, a man who has marked himself as fair military game through his decision to dispatch dozens of killers into Israel. What is "excessive" about dispatching an arch-terrorist along with three aides and bodyguards? No one outside Yassin's entourage was killed. To us, this sounds surgical rather than "disproportionate." Few terrorists deserved "martyrdom" more than Yassin. In the long run, his death will make the Middle East a safer place.

While there is little chance that the killing of Yassin will end the terror, the brutal reality is that Israel has nothing to lose. His death will demonstrate Israel is not an inert target and that it will do more than try to catch the suicide bombers before they strike. Despite the denunciations of Israel's action, practical Palestinian politicians who know the Jewish state cannot be destroyed will not regret the death of Sheikh Yassin. His death is one small step along the path away from perpetual war.

Blaming Jews for the Paris Attacks

New Year’s Resolutions for the Media

Jenin: Massacring Truth
Bechukotai 5782: Divine Retribution
Behar 5782: Working to Live or Living to Work?
The Wholeness of Being Broken
Comments
MOST POPULAR IN Media Objectivity
Our privacy policy