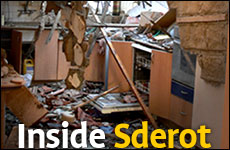 Arabs from Gaza are barraging residents of Sderot with steel rockets. An insider's view. 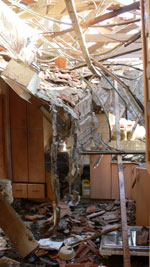 The day after Chanukah, I arrived at the Amar family home in Sderot at 7 a.m. Hours earlier, a kassam missile had crashed through their roof and passed straight through the kitchen, before slamming into the Sasson family's backyard.

Pinchas, the father, was chain smoking and walking through the ruins of his kitchen as I entered his home. There is a gaping hole in the roof. His kitchen has been shattered. Here is a father in his own home, the place he feels most secure, where he kept a normal Jewish life. His family is not with him. His wife, Aliza, just recovering from a stroke as a result of a previous terror attack, is back in the hospital being treated for trauma and injuries.

The family's Chanukah menorah lay unscathed on the mantle.

The camera tries to grasp details that say everything: The different Jewish symbols that in some miraculous way have survived the explosion. The hamsa good luck charms, the pictures of rabbis, Shabbat candles, an untouched collection of holy books in a glass case that remains intact, and the menorah that the family had lit for the past eight days, lying unscathed on the mantle overlooking the entrance to their home. 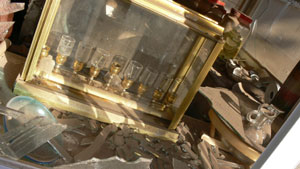 The Sasson family, their neighbors, came by while we were there. The husband, Moshe, described the condition of his wife who last night was evacuated to the hospital, unconscious.

"She's pretty shaken up, in the hospital, with high blood pressure, under observation, She may have suffered brain damage from the trauma and anxiety."

My first visit to the Sasson family was two weeks ago, when we accompanied athe Euro News crew, to experience a night at a Sderot home. This was a chance to show a TV audience of 200 million exactly what is occurring in Sderot.

The Sassons have a beautiful home with two floors, but they don't have enough time to run downstairs from the second floor in the 15 seconds it takes fro a kassam to strike. So the Sassons -- parents and 5 children -- have been living in their living room for the past year.

Their son Rafi built a protected shelter for his younger brother in the middle of the living room with money that he got when he was released by the army, since the Sasson's do not have a protected room in the house.

"Rafi has a very close relationship with Aziel, ever since Aziel was 8 years old and experienced the kassam rocket land while he was playing in the soccer field," Shula told me. "Five years later, Aziel is still in therapy."

Why don't you just leave Sderot?

Shula was pointing out to the small swimming pool that Moshe and the boys built in the back yard. "We don't go outside anymore, so we try living as much as possible at home. I just don't know how much longer I'll be able to keep going like this..."

"Why don't you leave your home, leave Sderot?" I ask.

"We have nowhere to go with five children. Real estate prices in Sderot have dropped went down over 50 percent. Who would be willing to buy or rent a home in Sderot? With the money we'd get, we couldn't afford any place suitable."

After a recent kassam barrage, the Sassons and ten other families from the neighborhood bought tents and went camping on the Kinneret for a week. "How long can we live in tents?" she asked.

A few blocks down on Mount Sinai Street is the Ohel Yitzchak Synagogue. This synagogue was hit this past May by a direct kassam rocket explosion, destroying the reception hall where – only 28 minutes before -- 400 people had celebrated the dedication of a new Torah scroll.

A few members of the Dahan family remained at the synagogue, cleaning up. They were all saved, since one member the Dahan family had just cleaned the reception hall that was hit and had locked it. And they all ran for shelter when the warning siren went off...

As a reporter -- and a resident of Sderot for the past year and a half -- I keep asking myself: How many stories can one tell and write about? There are endless stories of kassam rockets exploding. Every single family in Sderot has experienced the explosion of a rocket nearby. From that moment your life is changed.

What else is there to do, with an army of 20,000 Hamas soldiers in Gaza with 130 tons of ammunition waiting for the right time to strike Sderot's homes, many of which are not protected?

Last week, the mayor of Sderot, Eli Moyal, dramatically resigned, saying that he can no longer continue to shoulder the responsibility of 22,000 lives. The Israeli defense minister later persuaded Moyal to remain on the job. But it remains an intolerable situation. 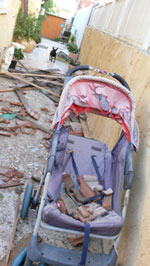 The recent attack occurred 24 hours after Chanukah had ended -- on the "ninth night," if you will. Publicizing the miracle of survival through writing, filming and taking pictures... that is what we must do. To record the human effects of merciless attacks on innocent people, instead of listening to the drab Israeli newscast, "A kassam fell on a home in Sderot today. Two people were injured and taken to the hospital. And now in sports news..."

After hearing the human stories of what people are going through, perhaps people in Israel and around the world will open up their hearts and homes to the people of the Western Negev. We need a solution. We need relief.