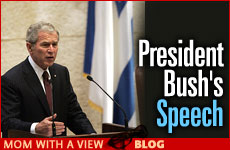 This is not a political blog, but in a world that so uniformly condemns us, we need to be grateful for our few friends.

This is not a political blog. I really don't care which side of the aisle you favor. In fact some of my best friends are…I'm not stumping for McCain or Obama or Hilary.

But I have to say that, corny thought it may sound, President Bush's speech to the Knesset brought a tear to my eye. It seems that many wish that the Members of Knesset would be as pro-Israel as this America president.

In a world that so uniformly condemns us, we need to embrace our few friends, and be grateful for their courage, their loyalty, their commitment.

Friends may make mistakes. But friendship is a precious and rare commodity. And friendship when you are not the most popular kid on the block is even more special.

"Israel's population may be just over 7 million. But when you confront terror and evil, you are 307 million strong, because the United States of America stands with you." This was and is a particularly strong statement. It seems to have brought the house down and well it should. It's comforting and reassuring not to be alone. It's a morale boost. It gives us strength.

But even more empowering than Bush's statement of political support, more than his anti-appeasement stance and his recognition of the futility of talking to terrorists and more than his clear assertion of our partnership in this war against evil, were his affirmations of religious belief.

In the President's mind (and words), the establishment of the state was "the redemption of an ancient promise given to Abraham and Moses and David, a homeland for the chosen people, Eretz Yisrael."

And later, "Soulless men took away lives and broke apart families. Yet they could not take away the spirit of the Jewish people, and they could not break the promise of God."

Are we as clear on our right to the land as Mr. Bush? Are we as willing to proclaim it publicly? Although we may differ in our understanding of what exactly begins the redemptive process, we all agree that the land was a gift from the Almighty. Or do we?

In a world where religion is discounted and books on atheism are bestsellers, the President's viewpoint is particularly meaningful, refreshing and courageous.

Not only should we appreciate his forthright statement of conviction, we should learn from it. We don't need to cower in the shadows (Or cover our mouths as we whisper the word 'God').

From Bush we can take strength and be unafraid to invoke our 'ancient' religious right to the land. In his famous explanation of the first verse in the Torah, the preeminent commentator, Rashi, teaches us that the Torah begins with the statement that the Almighty created the heaven and earth so that when He gives us, the children of Israel, the land of Israel, we will all know it was His to give.

It was, and is, the Almighty's to give. And He has given it to us, His children, explicitly -- along with awesome responsibility that goes along with it. There is no stronger claim to the land. This Thursday the American President reminded us of our claim, our privileges and our obligations.

He helped deepen our pride and commitment, and our sense of ownership. He encouraged us to continue our mission and to trust in the Almighty. He could have been speaking from the pulpit…

We should, of course, recognize this without Mr. Bush having to remind us. But we are only human. And the constant barrage of attacks from the world around us takes a toll. We may even get discouraged.

Yet when the President said that we are "a light unto the nations that preserves the legacy of Abraham and Isaac and Jacob," we can almost believe it.

Is It Safe to Visit Israel?

Negotiating with Kidnappers
Were Adam and Eve Jewish?
How I Learned to Love the Multiverse
10 Big Jewish Inventions
Comments