You Can't Govern From the Grave 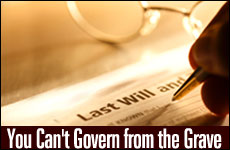 Max Feinberg tried to guarantee his family's Jewish lineage by drafting a will with a monetary sanction against intermarriage. It didn't work.

Everyone is familiar with Benjamin Franklin's famous adage that the only things absolute in life are death and taxes. Even though many high-priced trust and estate lawyers claim that they can eliminate one of those items, the certainty of death has assuredly not yet been eliminated.

The only other certain thing in life is uncertainty. We are all trying to control the variables in our lives to the best of our abilities. But as much as we would like to view life through a prism of black and white, we live in the dominant spectrum of gray.

We try to balance life's pressures and navigate a course of action through the tangled labyrinth of our days. The pressures facing us are enormous and multitudinous. We all have financial pressures, medical pressures, family pressures, social pressures and employment pressures. Even the most fortunate among us does not escape insecurity in at least one of these areas.

Religion, belief in God, and its accompanying rituals provide many people with a pillar of steadiness in a shaky world. For many Jews, the Torah provides the detailed blueprint for living our lives.

We will soon be celebrating the holiday of Sukkot, commemorating the Jewish people's 40-year journey in the desert and their entry into the Promised Land.

The dominant symbol of Sukkot is the sukkah, a fragile, temporary dwelling that is constructed without deep, lasting foundations and is easily movable, assembled and disassembled. The symbolism is powerful. Each one of us is on a transient journey in life. No matter how much we think we are in control of events that surround us, we are all subject to the shifts in weather and the economy. The idea that we can control the present, let alone the future, is a delusion.

The futility of trying to control other people and manipulate them into adhering to our belief system has been highlighted in recent months in the news. Ron Grossman, of The Chicago Tribune, and Pauline Dubkin Yearwood, of the Chicago Jewish News, have both written powerful accounts of the events surrounding the plight of the late Max Feinberg, a Chicago dentist who died in September 1986 at the age of 77.

Feinberg was a child of immigrants with a strong work ethic who saw patients seven days a week. He was also a savvy stock investor who made a lot of money. He was proud of his Judaism and hoped that his grandchildren would carry on his Jewish heritage.

Max's life trajectory was not too different from other Jews of his generation. He was a traditional Jew, but made a few compromises in his strict observance (like working on Shabbat) in order to advance in life. Nevertheless, he belonged to several synagogues, socialized with many Jews, and both his son and daughter married within the faith. He probably assumed that Jewish tradition would be transmitted to his children and grandchildren through osmosis. Since his parents, grandparents and great grandparents had a deep connection to Judaism, there was no reason for Max to believe that his grandchildren would be different.

As he grew older and witnessed the impact of rampant assimilation and intermarriage ravaging the Jewish community, he became very frightened. When Max learned that his grandson had taken a non-Jewish girl to his high-school prom, it propelled him to act. It is reported that Max put a provision in his will that explicitly prohibited any of his descendants from receiving their share of his multi-million dollar estate if they married a non-Jewish spouse who had not converted to Judaism.

In the past 20 years, four of Max's five grandchildren have married non-Jews. In a flurry of suits and countersuits within the family that have resulted over the division of the estate, some of Max's grandchildren have attempted to set aside the Jewish marriage provision in Max's will.

Forget the trust fund. Give your descendants a Jewish education.

Max Feinberg made a fundamental error in judgment. He felt that he could control the future and govern from the grave. He felt that he could guarantee his family's Jewish lineage by drafting a will with a monetary sanction. But, after vicious internecine legal battles, an Appellate Court in Illinois recently ruled that the will's marriage provision is "contrary to public policy" and thus invalid.

Appellate Justice Alan Grieman issued a powerful dissent, stating, "Max and Erla [his wife] had a dream with respect to the provisions of their will and if you will it, it is no dream." Other states have upheld such intermarriage provisions. Nevertheless, as it awaits Illinois Supreme Court review, the ruling remains the current law in Illinois. Barring a reversal by the Illinois Supreme Court, the intermarried grandchildren will ultimately receive Max's money.

When young people have no connection with their Jewish spirituality, it's impossible to mandate marriage within the fold. Had Max and others like him invested the bulk of their funds in a meaningful Jewish education and insisted that their grandkids attend a Jewish day school, they would have accomplished the goal of having their Jewish legacy continue.

Love of religion, connection to God, and love of other human beings must be generated internally and projected outwardly. It is not something that one person can tell another to do, but something that each one of us must feel.

It is wonderful to transmit money, social standing, comfort and a good name to our children and our children's children. But sometimes family fortunes are lost and social standing diminishes. Each one of our worlds is as unstable and exposed as a sukkah. Ultimately, the only thing that matters, the thing that will endure beyond the grave and govern future generations, is our Torah and connection to God. Only by transmitting the spiritual teachings of our tradition can we prop up the fragile sukkahs of our own lives and build a deep and enduring foundation for the future.

This article originally appeared in The World Jewish Digest.
Like What You Read?  Give Jews around the world the chance to experience engaging Jewish wisdom with more articles and videos on Aish. It would make your mother so proud and as a nonprofit organization it's your support that keeps us going. Thanks a ton!

George D. Hanus is chairman of the Superfund for Jewish Education and Continuity, the World Jewish Digest and the Jewish Broadcasting Network.

Turning the Clock Back1 min read