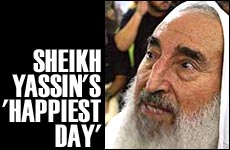 Early media reports misrepresent the IDF strike. Be on the lookout for these four myths.

Early Monday morning, the IDF struck and killed Sheikh Ahmad Yassin, the founder and leader of Hamas. Since early media reports misrepresented the IDF strike in a number of fundamental ways, be on the lookout for these four myths, and to respond appropriately with the facts:

Myth 1: The Yassin strike will escalate the violence

Nearly all news reports claimed within the first two sentences that the IDF strike is "likely to escalate violence," and constitutes "an enormous gamble by Sharon" that "risks triggering a dramatic escalation in bloodshed." (Associated Press)

This claim - which belongs on the editorial page, not in the same breath as the actual news report of the event - was so widespread that one almost forgets that it represents only the Palestinian position: The official PA statement characterized the Israeli strike as inviting "more violence and further escalation."

The absent Israeli position: Though terrorist efforts may increase temporarily, in the long run the elimination of Yassin will upset Hamas' leadership and violent capabilities, and serve as an essential deterrent to ongoing Palestinian terror. As Israeli spokesman Avi Pazner said:

His elimination will serve peace in the long run. He is personally responsible for all the most dreadful attacks in Israel. He was a dangerous extremist Islamic ideologist. He was danger to the entire region. By eliminating this threat to peace we will improve chances for a better Middle East.

Responsible news reports should either convey both positions, or neither.

BBC profiled Yassin as "a frail man who could barely see. His voice was thin and quavering." The Evening Standard prominently quoted the UK Foreign Secretary, who said "he did not believe that Israel would benefit from the killing of an old man in a wheelchair."

Actually, Yassin was in a wheelchair since age 12, when a sporting accident left him paralyzed. It's self-evident, therefore, that being wheelchair-bound never hampered Yassin's ability to orchestrate unprecedented terror - he founded Hamas in 1987 and proved perfectly capable of building the organization to its current strength from a sitting position.

HonestReporting encourages readers to check that articles present this essential information on Yassin's terror record. AP completely omitted any reference to Yassin's connection to terrorism until the final sentence of their report, and then only referred to Israel "blaming" Yassin for "inspiring" Hamas bombers.

Myth 3: Yassin was a 'spiritual leader' who deserved immunity

AFP, like most agencies, described Yassin as "the Islamist movement's spiritual guide," which suggests to a western audience that Yassin operated in a peaceful, contemplative realm aside from the violence, and was therefore unfairly targeted by the IDF. BBC went so far to say Yassin was "a powerful inspiration for young Palestinians disillusioned with the collapse of peace hopes." CNN calls Yassin a spiritual leader (unquoted), but then puts scare quotes around Israel's reference to him as a "terrorist."

Actually, Yassin's brand of 'spirituality' is the very ideological and emotional fuel that drives Palestinian (and worldwide Islamic) terrorism, the plague of our age. Yassin continually called for suicide terrorism as a religious obligation, and even said about himself that "the day in which I will die as a shahid [martyr] will be the happiest day of my life." (Al-Quds, July 26, 1998)

After Hamas released a statement that threatened radical Islamic retaliation beyond Israel's borders, AP called this an 'unprecedented' threat, triggered by Israel:

For the first time, Hamas also threatened the United States, saying America's backing of Israel made the assassination possible...In the past, Hamas leaders have insisted their struggle is against Israel and that they would not get involved in causes by militant Muslims in other parts of the world. Today's statement suggested that Hamas might seek outside help in carrying out revenge attacks, since its capabilities have been limited by Israeli military strikes.

This is simply untrue - Yassin himself had long called upon world Islamic terrorists to join with Hamas in global jihad. MEMRI reported in March, 2003 that on the Hamas website, "Sheikh Ahmad Yassin called on the Islamic nation 'to strike at Western interests everywhere if Iraq is conquered.'" And just two weeks ago, Hamas announced its commitment to "the global level of the Islamic world" as the reason for its choosing British suicide bombers to murder Israelis at Tel Aviv's Mike's Place in 2003.

An Arab Journalist in Jerusalem

Jeningrad?
Bechukotai 5782: Divine Retribution
Behar 5782: Working to Live or Living to Work?
The Wholeness of Being Broken
Comments
MOST POPULAR IN Media Objectivity
Our privacy policy