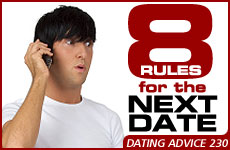 Whether you want to have another date with her, or not, here's how to do it.

Even though I've been dating for several years, there's something about dating etiquette I'm not sure about. When is a guy supposed to call a girl after a date to ask her out again? Right away? A few days later? Does the timing of when a man asks for a second date send any kind of message to a woman?

And what if a man changes his mind after telling his date that he'll call her? Does he make the call anyway, just to tell her that he doesn't want to go out?

What's the right way to handle things when a man doesn't want to go out with a woman again? Some of my friends don't want to hurt their dates' feelings, so they pay her compliments, like, "You're a really great girl," or " I had a terrific time with you" -- and then they tell her they don't want to go out again. I think it gives a woman false hope. Some guys prefer to pay compliments to their date, but never hint that they're not interested -- and then they never call her. I've been guilty of that myself, because it's hard to know how to tell someone you aren't interested without offending her!

Isn't there a better way to handle things? Can you give guys like me some advice about what's the right way to approach these situations?

There are some areas of dating in which there aren't any hard and fast "rules." However, when it comes to asking a woman for a second, third, or fourth date, or to ending the courtship at an early stage, certain practices are more considerate than others. Below are some "rules" that men will find are not overly difficult to follow, and that show consideration for the women they're dating.

If you plan to ask her out for another date, it's best to call within 24 hours, and certainly not more than 48 hours after your date ends. Follow this timetable whether you're enthusiastic about asking her out again, or have to be persuaded to ask her out again, or had second thoughts after you told her you would call. Remember that she's waiting, and she doesn't know whether you're planning to call again.

Most women expect to hear from their date within the following day or two. She may expect that you'll ask her out again simply because most daters are aware that it often takes two dates to get a sense of whether the courtship has potential. Other times, your date will be looking forward to hearing from you because she felt that potential on your first date. One day passes, and by the second day, she starts to think that you may not be interested in another date, or she wonders if she'd been wrong about your date going well. At the same time, she imagines "good excuses" why you didn't contact her right way.

By the third day, she's started to rationalize to keep herself from feeling hurt and rejected. She tells herself, "We probably weren't right for each other anyway." Or: "If he's taking so long to call back it means he has to be convinced to go out with me again -- and I don't want that!" Or: "Doesn't he know you're supposed to call a woman right away? He's either rude or he doesn't have any social graces."

By the time you get around to making the call three, four, or five days later, she's built up a wall of defense. Even if she would have said "yes" to a prompt call, by this time she's tuned out emotionally and is less likely to accept your request for another date. It's not fair to keep her waiting, and also if you wait too long she could take it as an indication that you're not so considerate.

Your date may have been arranged with the help of a third party, such as a friend or a matchmaker. If the third party has indicated a willingness to remain involved during the early part of the courtship, let him or her know how the date went within the same 24-hour time frame. Your date is waiting to hear from that third party about whether you'd like to go out again, and will go through the same process we've just described if you don't provide prompt feedback to the person who set you up. In addition, the earlier you contact the third party, the more he or she is better able to address any doubts or misunderstandings and help facilitate a second date.

We have to add another piece of advice here: Look at the clock before you make that call. Singles tend to have different timetables than married couples. Your pals may be happy to hear from you at midnight, or one hour before Shabbat begins, but a matchmaker or married friend would prefer that you wait to get back to them the next day, or when Shabbat is over.

Make that call promptly, even if you won't be able to have a second date as quickly as you would like. One man asked, "Last night was our third time out together. I told my date that I'd like to see her later this week, but I found out that I have to be out of town on business for the next five days. Should I call her now to set up a date so far in advance?" We answered: Absolutely. Tell her that you had hoped to ask her out for later this week, but because you have to go out of town, you'd like to schedule a date for next week. That's the approach of a considerate, thoughtful man who would like to continue the momentum of a courtship that may have potential.

Make that prompt phone call even if you aren't overly enthusiastic about a second date, and even if the person who set you up had to persuade you to ask a woman for a second date. Your first meeting may have been "so-so," but a first date is usually not enough to "know" whether someone is right for you. Many happily married couples we know had "pareve" first dates, and sometimes one or both partners had to be convinced to go out a second time. That's why we always recommend asking for a second date if the other person is at least "in the ballpark" and there's no clear reason why you shouldn't go out again.

What about an instance where you told her you'd call -- because you panicked and couldn't think of any pleasant way to say ‘no.' Or, you said you'd call but have since decided you don't want to continue. In such a case, keep your word. We know it's awkward to call and say that you aren't interested in continuing, but it's a lot better than leaving a woman hanging.

You can simply say, "I enjoyed meeting you last night. I told you I'd call, but since then I've done some thinking and I don't think that we are moving in the same direction. I wanted to let you know this and to wish you the best." Be polite and to the point, and don't make apologies ... or you may end up talking yourself into another date that you don't want.

If you're not going to ask a woman out again, don't tell her what a wonderful time you had, or how great a person she is. That sends a mixed message that confuses her and leads her to believe you're still interested. It's better to politely end a date with, "Thank you for meeting me tonight."

If you've gone on a few dates with someone and then decide you don't want to continue, let her know. She either expects that you will ask her out again, or she shares your sentiments but nevertheless expects some sort of closure. Instead of leaving her hanging, either tell her at the end of your date, or call her within a day or two, saying something like, "Over the past couple of weeks we've gotten to know a little about each other, and at this point, I don't think it is a good idea for us to continue. We aren't moving in the same direction / our personalities are very different / it seems to me that we don't want the same things out of life. I hope that each of us finds the right person soon." Don't go into a lengthy analysis of why you aren't right for each other, and don't give her mixed messages by telling her how wonderful she is.

It isn't unusual to realize that while the woman you're dating is not right for you, she may be very well-suited to your roommate, brother, friend, cousin, or co-worker. There's nothing wrong with calling her a short while after you've stopped dating to say, "Even though it didn't work out for us, I think it might be good for you to meet my friend, Steve. I took the liberty of describing you to him, and he thinks it sounds like a good idea. I called to see if you'd like to talk about my suggestion."

This idea works both ways. We know of many such calls where the women thought, That was so thoughtful of him to call and suggest this. He really is a great guy. I should set him up with my roommate.

The bottom line is: Be considerate, and stick to your word. In dating and in life, this golden rule will always work to your advantage.