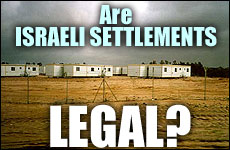 Israel's use of land for settlements conforms to all rules and norms of international law.

Israeli settlements in the West Bank are legal both under international law and the agreements between Israel and the Palestinians. Claims to the contrary are mere attempts to distort the law for political purposes. Yet whatever the status of the settlements, their existence should never be used to justify terrorism.

The Palestinians often claim that settlement activity is illegal and call on Israel to dismantle every settlement. In effect, they are demanding that every Jew leave the West Bank, a form of ethnic cleansing. By contrast, within Israel, Arabs and Jews live side-by-side; indeed, Israeli Arabs, who account for approximately 20% of Israel's population, are citizens of Israel with equal rights.

Within Israel, Arabs and Jews live side-by-side; indeed, Israeli Arabs, who account for approximately 20% of Israel's population, are citizens of Israel with equal rights.

The Palestinian call to remove all Jewish presence from the disputed territories is not only discriminatory and morally reprehensible; it has no basis either in law or in the agreements between Israel and the Palestinians.

The various agreements reached between Israel and the Palestinians since 1993 contain no prohibitions on the building or expansion of settlements. On the contrary, they specifically provide that the issue of settlements is reserved for permanent status negotiations, which are to take place in the concluding stage of the peace talks. The parties expressly agreed that the Palestinian Authority has no jurisdiction or control over settlements or Israelis, pending the conclusion of a permanent status agreement.

It has been charged that the provision contained in the Israel-Palestinian Interim Agreement prohibiting unilateral steps that alter the status of the West Bank implies a ban on settlement activity. This position is disingenuous. The prohibition on unilateral measures was designed to ensure that neither side take steps that would change the legal status of this territory (such as by annexation or a unilateral declaration of statehood), pending the outcome of permanent status talks. The building of homes has no effect on the final permanent status of the area as a whole. Were this prohibition to be applied to building, it would lead to the unreasonable interpretation that neither side is permitted to build houses to accommodate the needs of their respective communities.

As the Israeli claim to these territories is legally valid, it is just as legitimate for Israelis to build their communities as it is for the Palestinians to build theirs. Yet in the spirit of compromise, successive Israeli governments have indicated their willingness to negotiate the issue and have adopted a voluntary freeze on the building of new settlements as a confidence-building measure.

Furthermore, Israel had established its settlements in the West Bank in accordance with international law. Attempts have been made to claim that the settlements violate Article 49 of the Fourth Geneva Convention of 1949, which forbids a state from deporting or transferring "parts of its own civilian population into the territory it occupies." However, this allegation has no validity in law as Israeli citizens were neither deported nor transferred to the territories.

Although Israel has voluntarily taken upon itself the obligation to uphold the humanitarian provisions of the Fourth Geneva Convention, Israel maintains that the Convention (which deals with occupied territories) was not applicable to the disputed territory. As there had been no internationally recognized legal sovereign in either the West Bank or Gaza prior to the 1967 Six Day War, they cannot be considered to have become "occupied territory" when control passed into the hands of Israel.

Yet even if the Fourth Geneva Convention were to apply to the territories, Article 49 would not be relevant to the issue of Jewish settlements. The Convention was drafted immediately following the Second World War, against the background of the massive forced population transfers that occurred during that period. As the International Red Cross' authoritative commentary to the Convention confirms, Article 49 (entitled "Deportations, Transfers, Evacuations") was intended to prevent the forcible transfer of civilians, thereby protecting the local population from displacement. Israel has not forcibly transferred its citizens to the territory and the Convention does not place any prohibition on individuals voluntarily choosing their place of residence. Moreover, the settlements are not intended to displace Arab inhabitants, nor do they do so in practice. According to independent surveys, the built-up areas of the settlements (not including roads or unpopulated adjacent tracts) take up about 3% of the total territory of the West Bank.

Israel's use of land for settlements conforms to all rules and norms of international law. Privately owned lands are not requisitioned for the establishment of settlements. In addition, all settlement activity comes under the supervision of the Supreme Court of Israel (sitting as the High Court of Justice) and every aggrieved inhabitant of the territories, including Palestinian residents, can appeal directly to this Court

Any political claim -- including the one regarding settlements -- should never be used to justify terrorist attacks on innocent civilians.

The Fourth Geneva Convention was certainly not intended to prevent individuals from living on their ancestral lands or on property that had been illegally taken from them. Many present-day Israeli settlements have been established on sites that were home to Jewish communities in the West Bank (Judea and Samaria) in previous generations, in an expression of the Jewish people's deep historic and religious connection with the land. Many of the most ancient and holy Jewish sites, including the Cave of the Patriarchs (the burial site of Abraham, Isaac and Jacob) and Rachel's Tomb, are located in these areas. Jewish communities, such as in Hebron (where Jews lived until they were massacred in 1929), existed throughout the centuries. Other communities, such as the Gush Etzion bloc in Judea, were founded before 1948 under the internationally endorsed British Mandate.

The right of Jews to settle in all parts of the Land of Israel was first recognized by the international community in the 1922 League of Nations Mandate for Palestine. The purpose of the Mandate was to facilitate the establishment of a Jewish national home in the Jewish people's ancient homeland. Indeed, Article 6 of the Mandate provided for "close settlement by Jews on the land, including State lands not required for public use."

For more than a thousand years, the only time that Jewish settlement was prohibited in the West Bank was under the Jordanian occupation (1948-1967) that resulted from an armed invasion. During this period of Jordanian rule, which was not internationally recognized, Jordan eliminated the Jewish presence in the West Bank (as Egypt did in the Gaza Strip) and declared that the sale of land to Jews was a capital offense. It is untenable that this outrage could invalidate the right of Jews to establish homes in these areas, and accordingly, the legal titles to land that had already been acquired remain valid to this day.

In conclusion, the oft-repeated claim regarding the illegality' of Israeli settlements has no legal or factual basis under either international law or the agreements between Israel and the Palestinians. Such charges can only be regarded as politically motivated. Most importantly, any political claim -- including the one regarding settlements -- should never be used to justify terrorist attacks on innocent civilians.

Aboriginal Rights of the Jewish People

Israel's Right to the Land
Should I Break Up, Get Engaged or Keep Dating?
Time Is Your Precious Commodity
A Constant World in Flux
Comments
MOST POPULAR IN Land of Israel
Our privacy policy