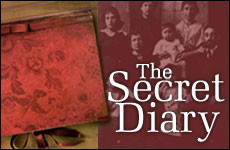 A diary written in German unravels a mystery that changes a woman's life.

Amanda Kantor was born in 1978, and raised on a farm in Washington State, 200 miles south of Seattle. Amanda's mother Nancy was of German extraction, while her father Kevin was pure-bred Irish and proud of it. The 50-acre farm grew Christmas trees. Amanda would get up early to do chores around the farm, then eat a breakfast of bacon, eggs, sausage, and pancakes, all before catching the school bus.

The Kantors were Protestant, but not avid church-goers. They went to church only on Christmas, and on Mother's Day, to please Grandma Kantor. The main holiday of the year was St. Patrick's Day, which was feted with a dinner of corned beef and cabbage and lots of Guinness beer. Grandma Doris Bowden, on Amanda's mother's side, was an adamant atheist. She used to tell her children that God wasn't real, but was just a myth concocted by weak people. When her daughter Nancy opted to go to the Methodist Sunday school, Doris would take the other children out to breakfast and bid them afterwards to gloat to Nancy about what she had missed, thus to lure her away from the blandishments of religion.

Amanda's life on the farm was wholesome and simple, until one day in 1996, during her senior year of high school. Amanda decided to do her capstone project on her family history. She started by researching her father's side of the family. This was easy, as Grandma Kantor, who had emigrated from Ireland, knew everything about the family and was glad to talk about it.

Her mother's side of the family posed greater challenges. Grandma Doris's mother, Anna Hilder, who had emigrated from Germany in 1939, lived to a ripe old age, but she spent the last two decades of her life suffering from dementia. As a child, Amanda would visit Great Grandma Anna. Most of the time, Anna spoke German. When she did speak English, she repeated the same questions over and over again: "Where are my parents? What happened to my little brother Ezra? Where are my sisters? Where is Ezra?"

For her project, Amanda attempted to interview Grandma Doris. She wasn't very helpful, but she handed Amanda a red, leather-bound diary. "This was my mother's," she said. "This is all I have."

The diary was in German, written in the scrawl of a young adolescent. Amanda was disappointed. What good to her was a diary in German? She approached a classmate who was studying fourth-year German, and the girl agreed to translate the diary.

A month later, the job was done. The girl returned the diary to Amanda, accompanied by a list of words. The girl explained that she couldn't find a translation for those words, even in the best German dictionary. Even her German teacher did not know their meanings. She also said that the diary had several peculiarities. For example, the author had written about big preparations for "the holidays," but that entry was dated September, not December. In another place, she wrote about celebrating "the holiday," and followed it with the strange sentence, "Gretchen had Easter this weekend." Why, wondered the translator, did only Gretchen have Easter?

The classmate handed her translation to Amanda with the words, "I think your great-grandmother may have been Jewish."

Amanda sat down at her computer and did an internet search for the untranslatable words. It turned out that they were not German at all, but Yiddish.

In the throes of the end of her senior year, Amanda had no time to reflect on this surprising revelation. She submitted her project, mentioning briefly that her maternal great-grandmother may have been Jewish.

After graduation, she had more time to reflect. One day she took a walk in the forest, sat down on a tree stump, and gazed at the diary in her hands. "What does this really mean to me?" Amanda wondered. During her teenage years, she had felt an impetus toward religion. She had attended a couple churches, a Mormon temple, and a Baha'i temple. Of course, she had never even considered Judaism. She didn't know a single Jew. She looked at the diary and thought, "Perhaps this is an arrow to point me in the right direction. I'm 18. I can try this out."

Where to start? Amanda knew that Jews pray in synagogues. Perhaps there was one in Olympia, 50 miles away. Online she discovered that Olympia had exactly one synagogue. The next Saturday, Amanda was there. It turned out that the rabbi was a lesbian; she and her partner were celebrating their anniversary. "They kissed on stage," Amanda recalls. "It just wasn't for me."

Instead, Amanda decided to learn about Judaism through books. Through her local library, she ordered a plethora of Jewish books from Seattle on interlibrary loans. She discovered that Judaism is transmitted through matrilineal descent. She figured she wouldn't have to become a Jew; she probably already was a Jew. The first concrete action she undertook to celebrate her recently-discovered Judaism was to stop eating pork. Grandma Kantor soon noticed that Amanda wasn't eating bacon for breakfast any more. When she asked her why, Amanda replied, "I'm just trying something new."

For two years after completing her family history project, Amanda held onto the diary. Finally one day she visited Grandma Doris, diary in hand, and asked her, "What does this mean? Does this mean that Grandma Hilder was Jewish?"

Doris got defensive. She retorted angrily, "I don't know why you needed to look up all that information anyway." Then she snatched the diary from Amanda's hand and yelled, "If this is what you're going to do with this information, you don't need this."

It was too late. The diary's past became Amanda's future.

Four years later, Doris, suffering from Alzheimer's, was moved to a nursing home. Amanda and her family searched Doris's house, but the diary was nowhere to be found. Apparently she had destroyed it.

It was too late. The diary's past became Amanda's future. Over the next few years, during and after college in Seattle, Amanda took classes with a rabbi and gradually became observant.

In 2002, Amanda did an internet search for "Jewish family heritage" companies. She hired the first company listed. She sent them the scant information she had: Her great-grandmother Anna Hilder had come to the United States from Munich, Germany in 1939 with her husband George Hilder.

Six months and $900 later, Amanda got her answers. Anna's maiden name was Talen. Anna was the oldest of six siblings. Anna's father had an influential post with the German government until Hitler came to power in 1933. At that point, Anna's father married his beloved daughter Anna to a well-connected Christian neighbor, hoping that, as doom descended on the Jews of Germany, Anna would be saved.

The Nuremberg Laws of 1935, however, must have dashed Mr. Talen's hopes. The Nuremberg Laws forbid Germans from marrying Jews. Germans already married to Jews must divorce them or share their fate. Apparently George Hilder decided instead to take his wife and flee to the safety of America. Among the email attachments in Amanda's mailbox was a photocopy of Anna's parents' ketubah [marriage contract], meticulously preserved in the records of German Jewry.

According to an interview with an elderly German who knew the family, the entire Talen family was rounded up and deported. None of them ever came back. The interviewee listed the names of Anna Talen's siblings. The youngest was Ezra.

Amanda remembered her demented great-grandmother obsessively repeating the question: "Where is Ezra? Whatever happened to Ezra?"

The evidence from Germany was sufficient to convince a Beit Din [Jewish court] that Amanda Kantor was Jewish.

Today Amanda and her husband, an Orthodox rabbi, live in Jerusalem with their infant daughter.

The tree stump looked dead -- entirely severed. But apparently the roots were still alive, because a single, new shoot has sprouted from the moribund trunk. It has only a few leaves, but it is growing strong, and some day that shoot will become a mighty tree.

Why I Won’t be Observing Yom HaShoah this Year

Bob Dylan and Me

Me and My Antisemitic Girlfriend
Can You Show Me This "God?"
How to Become Immortal
Judaism and Mental Health
Comments
MOST POPULAR IN Spirituality
Our privacy policy
Aish.com Is Looking for Great Writers