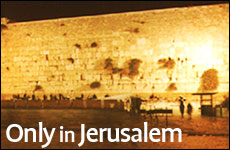 Despite my mother's warning, I spoke to a stranger and had one of the most powerful experiences of my life.

I had spent close to two months traveling around Israel; experiencing the food, the culture, and from time to time, even the wrath of an angry local unable to comprehend my English. I was on high alert, after having been approached by what I suspected was a terrorist in the central bus station, who turned out to be an overly friendly local looking for a new "friend." This encounter aside, I felt immersed in the culture and met some extremely interesting and entertaining people throughout my journey. However, none were as thought provoking as the family I was soon to meet, Rabbi Yossi and Hindle Swerdluv.

It was Friday night and the sun was setting on the walls on the Old City of Jerusalem. The famous Dome of the Rock shone in the background as the rays gently touched upon its surface, radiating their fiery glow. This was my last weekend in Israel, and it was important to me to spend one Shabbat in the holiest city in the world.

I was lucky enough to share the experience with thousands of others surrounding me from all walks of life, waiting patiently for their turn to pray at the Kotel. The Wall is the only remnant we have left of our once great Temple, which stood there thousands of years ago. Each stone wrought with centuries of history; they have witnessed the many sorrows and triumphs that have made this place legendary.

Yet somehow I did not feel the spiritual connection. The passion for the land that years of Jewish schooling had so desperately tried to instill simply did not fall into place. I was waiting, but for what?

The sun had set and the crowds began to disperse, back to their homes for the traditional lavish Friday night meal. The rumble in my stomach told me we had been there long enough. My friend and I were excited to get back to our hotel and prepare our own traditional meal of a simple grilled cheese.

As we made our way to the steps exiting the Old City, a friendly looking man brought us to a halt with a single smile. The man had a long grey beard and a large black hat. His face and presence was so warm; it was like welcoming a long lost friend.

Without any introduction he called us aside and asked, "Do you know how many Jews there are in the world?"

Without any introduction he called us aside and asked, "Do you know how many Jews there are in the world?" My reaction was delayed, as it was not the average question one would expect from a stranger. Nonetheless, the number came to me quickly, as we had just learned it that year in Socials Eleven. However, my response did not surprise him (I was hoping at least for a blink of acknowledgement as to my achievement). 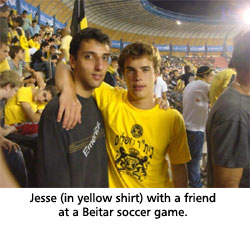 He simply shook his head, "There is only one Jew in the world. We are all intertwined, connected and responsible for each other." He continued, "If you don't have a place to eat, nothing would honor me more than if you boys were to join my family and me in our home for dinner." I turned to my friend with amazement, and yet without a word, we both simultaneous replied, "Yes, we would love to."

Rabbi Yossi Swerdluv and his wife, Hindle, along with their three young children lived in a small apartment in the Old City. Without the financial aid of any organizations they had invited some thirty other strangers into their home that night. The Swerdluv's were a religious Orthodox family, and every one of their guests came from various different backgrounds, but all the guests had met the Rabbi in a similar way.

After briefly introducing himself and his family, Rabbi Swerdluv proceeded to explain the blessings and rituals of the meal to all the guests. He looked at every guest around the table, making us all feel the conversation was directed towards us personally. The Rabbi's next request was for each person in turn to tell a story. We all went around the table, some tales more meaningful than others, but all really pleasant.

One man described his meeting with Kelsey Grammar, and another shared with us the final words whispered by his grandfather on his deathbed. One young man even stood up and proclaimed that the kindness and hospitality the family has shown him changed his fundamental view of mankind, and that maybe we are not all inherently evil. In the short time that we were around the table, we all felt a connection; a room full of complete strangers had become a family.

The meal continued; plate after plate arrived with the most delicious foods accompanied by laughter and song. From the sound outside, the chatter and laughter of the table must have sounded like that of an army of thousands. The noise however, was silenced in an instant with the gentle quiet sobs and tears flowing down the face of the Rabbi's wife.

Everything seemed to freeze, suspended in time, for no one dared to interrupt her. She wiped her eyes and stood up to explain that her tears were those of joy. When her father had passed away she had made him a promise. She promised him that every Shabbat, her family would welcome one guest to their table in his honor. It has been years since his passing, and now they had more people in their home, more family, than ever before. The greatest joy for the Swerdluv family is, week after week, seeing faces that they do not recognize and, by the end of dinner, faces they will never forget.

Everything else seemed to fall perfectly into place, and I was able to make sense of all my questions.

I had found it, exactly what I was looking for. I did not need a religious experience or epiphany. I had a human experience and this to me was the most real. Everything else seemed to fall perfectly into place, and I was able to make sense of all my questions.

It gave the Kotel all the meaning in the world to me. The benevolence and true compassion that was shown to me by these strangers completed my trip to Israel, and it completed me. In those three short hours in the company of those unfamiliar faces, I learned the true definition of equality. My time had come to depart, but I would leave with far more than a full stomach. We were all brought together under the Swerdluv roof; their compassion and kindness could never be forgotten by anyone at the table.

His smile was certainly contagious, and with each new week more strangers will have the privilege to be infected.

I have been inspired to continue my studies in Israel in the coming year, thanks to the Swerdluv family. I hope to gain a better understanding and deep appreciation for Israel and my Jewish roots. I received such a small taste of the many mysteries Israel has to offer, and I can't wait to get more. With so much anti-Semitism in the world today, I feel it is our duty to support our homeland with all our hearts. As Jews, if we don't remember where we came from, its gives the rest of the world the ability to forget.

Jesse Friedland is a 12th grade student at King David High School in Vancouver,Canada, BC. He emigrated from South Africa to Canada in the 7th grade. This was his first time in Israel (Young Judea Bilium summer 2007 program). He has been a member of NCSY (National Conference of Synagogue Youth) since the 8th grade and is now president of the Vancouver chapter.