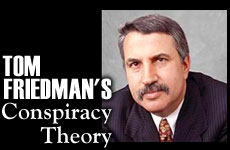 Thomas Friedman is a Pulitzer Prize-winning columnist for The New York Times. This, combined with the fact that Friedman is Jewish, makes all the more shocking his Feb. 5 column (http://www.nytimes.com/2004/02/05/opinion/05FRIE.html), which makes the outrageous claim of a Jewish conspiracy operating in Washington:

This sounds like something more apt to the Protocols of the Elders of Zion or the Syrian news agency, than it does America's "newspaper of record."

Friedman's words -- impugning the White House as carrying an agenda not in America's best interest, while rehashing the anti-Semitic canard of a vast Jewish conspiracy -- has set off a firestorm. Former New York City Mayor Edward I. Koch writes:

Tom Friedman, who is full of himself, believes he can resort to the anti-Semitic slur of secret Jewish control, and avoid criticism because he is a Jew. In reality, Friedman disgraced himself and his newspaper. His false words, coming at a time when anti-Semitism is skyrocketing worldwide, are particularly irresponsible and repulsive.

But that's not all that's wrong with Friedman. He gets his facts wrong, too. Friedman writes:

[L]ast week, Mr. Sharon turned over 400 Palestinian prisoners to the Islamist Lebanese militia Hezbollah in a prisoner swap, something he was never ready to do with moderate Palestinian leaders.

In fact, on two occasions -- June and August, 2003 -- Sharon ordered the release of hundreds of Palestinian prisoners, in what his administration specifically called "goodwill gestures" to support Abbas and the road map peace process. Friedman's own New York Times reported after the August release that it was "the largest of several Israeli prisoner releases in the past few months, and brought the number of those freed to almost 600." These releases, for which Israel received nothing in return, were not part of the road map process, and were specifically undertaken by Israel to try to bolster Abbas.

The day that Friedman's article appeared, HonestReporting issued a comm encouraging subscribers to write to the Times about Friedman's error.

My Feb. 5 column erred in saying Ariel Sharon had released no Palestinian prisoners to Mahmoud Abbas. He did. It was just too limited a release to have any impact.

By "limited release," Friedman clarifies that "none of them [were] big-name fighters" and that some were "just criminals."

Yet in June, 2003 Israel did release a "big-name fighter": Ahmad Jabara, known as the "refrigerator bomber" for a terror attack that killed 13 people, was released to much fanfare, front page headlines in the PA daily paper, and a warm public reunion with Yasser Arafat.

Still, this error pales in comparison to Friedman's assertion that Sharon has "George Bush under house arrest" and that Dick Cheney is "ready to do whatever Mr. Sharon dictates."

Send your comments to the Times' editor: letters@nytimes.com

And to the Times' ombudsman, Daniel Okrent: public@nytimes.com

A New Twist on Tom

Most of the time I enjoy my monthly lunches with my friend Phil. He always makes me laugh. Phil is the type of person who never has a mean word to say about anybody. But today's meal was very different. When Phil walked in he was practically frothing at the mouth, ranting about Tom Friedman's February 5 column.

Phil's face got dark purple. "Good?" he yelled. "GOOD!? He has done so much harm to Israel! His words are ludicrous and will be used by people to attack Israel. Is that good?!"

The deli got very quiet.

"Calm down Phil, you'll get us thrown out of here," I whispered, hoping that he would copy my tone. "Don't you get it? Tom Friedman is misunderstood. He's just trying to protect Israel and the Jews."

Phil looked at me like I had just grown a third eye, but I kept on going.

"Why would he perpetuate stereotypes about Jews controlling the world? He blames all the violence on Sharon government, even though this violence started under the watch of a liberal prime minister. It's clear that Tom is using a very clever approach: He's trying to destroy a classic Jewish stereotype. Let's face it: If we Jews can't control one of our own, how can people think we control the world?"

Phil seemed to calm down a bit. "Really?" he asked.

"Of course," I answered. "Consider the time Tom said that the only reason President Bush supported Israel was that he didn't want to alienate the Jewish vote. 'Mr. Bush blinked because he didn't want to alienate the Jewish voter' (NY Times, June 30, 2002). Does that really sound like someone who's last name is Friedman? No -- that sounds more like something we'd hear from the Prime Minister of Malaysia. Obviously Tom doesn't really believe that, so he must be saying all this to make an astute point.

"Look at his statement of January 18 that Israel is standing in the way of the Arab/Muslim world modernizing? Does anyone really believe that? Tom is totally ignoring the repressive regimes such as Iran and Syria who refuse to modernize because it will lead to democratization… and the end of their power. Come on! Tom even uses terms like 'cycle of violence,' putting a bus bombing and the elimination of terrorists on the same moral plane. I'm sure Tom really hates saying these things. But he's taking one for the team, fighting anti-Semitism by taking it to the extreme. Gotta hand it to ole Tom!

"And how about when Tom says that Israel should take the initiative to dismantle settlements -- and then when it does, like last week's Gaza announcement, Tom rips it to shreds, saying it's a plot to take over the West Bank! Wow, what style. A classic reversal. Isn't Tom wonderful?"

"Tom is really doing this all on purpose, just to combat anti-Semitism. Amazing. I wonder if Mel Gibson is in on this project, too…"

Media Critique: How Can CNN Keep a Straight Face

The Moral Battleground
The Promise Of The Land
Which Chat Are You On?: Parshas Behar/Lag Ba’Omer
Do You Like Slow-Cooked Food? Thank the Jews
Comments
MOST POPULAR IN Media Objectivity
Our privacy policy