Of Earthquakes and Abortion 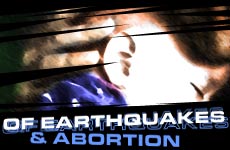 We are willing to extend Herculean efforts to save a life, even when the possibility is remote. Why should limiting abortion on demand be any different?

The recent tragic earthquake in India, like similar catastrophes, has
yielded reports of survivors like Viral Dalal, who was discovered unscathed
five days later underneath the rubble of a collapsed building.

It is for such joy amid misery that dedicated rescue workers labor mightily
to remove debris and search for signs of life, even when there seems little
reason to imagine that, buried beneath tons of concrete and metal, a human
being may live and breathe. Our hearts and our minds, moreover, insist that
even the mere possibility of saving a life is cause enough to warrant such
action, even if it drains our energy and resources.


What, though, if searching for a possible survivor would take an even
greater toll, if it would interfere, say, with an important religious
obligation?

The Talmud, the essential Jewish legal text, posits just such a case: the
collapse of a not-known-to-have-been-occupied building on the Sabbath, when,
according to Jewish religious law, or halacha, an act like digging through
the rubble transgresses the prohibition against work on the Sabbath,
constituting a desecration of one of the Ten Commandments. Notwithstanding
that fact, however, the Talmud requires one to assist immediately in the
task of moving the debris until it is ascertained that no survivor is
languishing beneath the ruins.

Even the remote possibility of saving a life renders otherwise important concerns secondary.

Even the remote possibility of saving a life, the Talmud is saying, renders
otherwise important concerns secondary and, with only the rarest exceptions,
demands our every effort. In fact, even if the violation of Sabbath might
yield only short-lived survival, the added moments of life take precedence,
according to halacha.

While it may be that halacha is accepted as binding today only in certain
Jewish circles, one imagines that Jews of all levels of religious observance
would readily accede to the wisdom and morality of this particular ruling.
Life is important enough, most reasonable people would say, for even its
possibility to concern us.

Which might lead us to wonder why the prospect of saving possible life by
limiting abortion on demand engenders so vehement a reaction among so many
Jewish Americans.

Consider: The Pope, Supreme Court Justices and feminists may all have
beliefs or opinions about when life begins and when it is morally acceptable
to terminate fetal life, but no one can in any way objectively prove that
his or her view is definitively correct. They can all argue, to be sure,
but the dialectic will necessarily be limited to the "is so!"/"is not!"
genre.

So what we have, in the end, at least from a secular perspective, is an
essentially unanswerable question. Life becomes real, priceless and
inviolable at some point, at latest after birth (though Princeton Professor
Peter Singer apparently disagrees even there). What, though, of a viable
fetus just before birth? A day before its third-trimester "pre-birthday"?
Or one even younger? Or one not yet viable?

Ought we not concede, in all humility, that as objectively unanswerable as
these questions may be, there is at least a possibility of life at these
stages? And, if so, that even the mere possibility of life must concern us
desperately as human beings.

Unfettered "reproductive freedom" is a concept entirely alien to Judaism.

And for us Jews, shouldn't the teachings of Judaism on this sensitive
subject be at least relevant to our thinking? The Torah does, after all,
have something to say about when life begins, and under what circumstances
pregnancy may be terminated. Under Jewish law, while a Jewish woman may
procure an abortion in a situation where her life is endangered by continued
pregnancy, and perhaps in situations where the pregnancy poses grave danger
to her health (a matter of dispute among respected rabbinical authorities),
abortion is otherwise prohibited.

Stated simply, unfettered "reproductive freedom" is a concept entirely alien
to Judaism. Why then does it appear to command so much allegiance among
American Jews?

An earthquake, and the Herculean efforts to find and rescue potential
survivors, should shake all of us up to confront not only the terrible end
of so many lives but the question of the beginnings of so many others. We
imperil our status as caring, thinking beings if we refuse to consider
whether the "facts on the ground" here in our nation, the effective
acceptance of abortion on demand, might just reflect a very imperfect
approach.

In other words, we insist on pretending that abortion is somehow a
simple issue of personal choice, rather than a complex one of human life.

With thanks to Am Echad Resources

We’re Not All in the Same Boat

You Have No Rights, Only Responsibilities

When Isaac Lidsky went Blind
Scientific Curiosity and the Divine Encounter
Mind Over Milkshakes
Love the Convert
Comments
MOST POPULAR IN Spirituality
Our privacy policy
Aish.com Is Looking for Great Writers