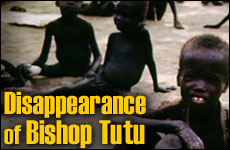 Where is Desmond Tutu when my people in Sudan call out for freedom?

Late last month, I went to hear Bishop Desmond Tutu speak at Boston's Old South Church at a conference on "Israel Apartheid." Tutu is a well respected man of God. He brought reconciliation between blacks and whites in South Africa. That he would lead a conference that damns the Jewish state is very disturbing to me.

The State of Israel is not an apartheid state. I know because I write this from Jerusalem where I have seen Arab mothers peacefully strolling with their families -- even though I also drove on Israeli roads protected by walls and fences from Arab bullets and stones. I know Arabs go to Israeli schools, and get the best medical care in the world. I know they vote and have elected representatives to the Israeli Parliament. I see street signs in Arabic, an official language here. None of this was true for blacks under Apartheid in Tutu's South Africa.

I also know countries that do deserve the apartheid label: My country, Sudan, is on the top of the list, but so are Iran, Saudi Arabia and Egypt. What has happened to my people in Sudan is a thousand times worse than Apartheid in South Africa. And no matter how the Palestinians suffer, they suffer nothing compared to my people. Nothing. And most of the suffering is the fault of their leaders. Bishop Tutu, I see black Jews walking down the street here in Jerusalem. Black like us, free and proud.

Tutu said Israeli checkpoints are a nightmare. But checkpoints are there because Palestinians are sent into Israel to blow up and kill innocent women and children. Tutu wants checkpoints removed. Do you not have doors in your home, Bishop? Does that make your house an apartheid house? If someone, Heaven forbid, tried to enter with a bomb, we would want you to have security people "humiliating" your guests with searches, and we would not call you racist for doing so. We all go through checkpoints at every airport. Are the airlines being racist? No.

Yes, the Palestinians are inconvenienced at checkpoints. But why, Bishop Tutu, do you care more about that inconvenience than about Jewish lives?

Bishop, when you used to dance for Mandela's freedom, we Africans -- all over Africa -- joined in. Our support was key in your freedom. But when children in Burundi and Kinshasa, all the way to Liberia and Sierra Leone, and in particular in Sudan, cried and called for rescue, you heard but chose to be silent.

Today, black children are enslaved in Sudan, the last place in the continent of Africa where humans are owned by other humans -- I was part of the movement to stop slavery in Mauritania, which just now abolished the practice. But you were not with us, Bishop Tutu.

So where is Desmond Tutu when my people call out for freedom? Slaughter and genocide and slavery are lashing Africans right now. Where are you for Sudan, Bishop Tutu? You are busy attacking the Jewish state. Why?

Simon Deng, a native of the Shiluk Kingdom in southern Sudan, is an escaped jihad slave and a leading human rights activist.

Israel from the Air

Praying for My Soldier

Remembering Ari Fuld: Miracle In Lebanon
Lessons from the Book of Jonah
Where Are We? The Body, Brain, Soul Problem
Dr. Sheila Nazarian’s Escape from Iran
Comments
MOST POPULAR IN Israel
Our privacy policy
Aish.com Is Looking for Great Writers