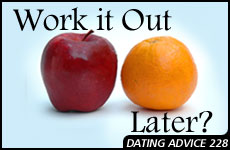 They can't reach a basic lifestyle agreement. Will love solve everything?

I have been dating a man for four years. When we started dating, we were both in Israel exploring Judaism. After we got back to America, our relationship grew and flourished. We were very happy together. Over time, I became more observant, and he became less so.

His dream job, from the time he was a child, is to be a hockey coach. He thinks that fulfilling this dream is more important than keeping Shabbat every week. He has no problem keeping Shabbat as long as it does not conflict with his hockey. This is difficult for me to handle because if we get married, I will be left alone on Shabbat when he goes to coach hockey. Furthermore, it will cause major issues when raising children.

I think we should trust our love and respect for each other and take the risk.

We have been together for four years and love each other very much. He feels we should not get married until all our issues are worked out. However, I think this is just an excuse on his part for not wanting to get married. We both agree that our love and respect for each other will allow us to overcome any challenge once we are faced with them. Unfortunately, we will not be faced with these challenges until we are married. So there is no way of knowing for sure how they will be worked out.

I think we should trust our love and respect for each other and take the risk. He thinks we should give it more time. I am not sure what time will do because we cannot work out the issues until we are faced with them. Furthermore, every time we try to hypothetically work out the situations, the conversation goes in circles and ends negatively.

What should we do?

You describe a fairly common phenomenon: Two people who are relatively young and growing, but are not quite ready for marriage, develop a strong emotional connection while dating. They find that they have common values and goals and feel that they are developing in the same direction. However, at some point their paths begin to diverge, and over time the direction each takes becomes very different than the other. Meanwhile, they still care for each other a great deal and want to recapture the original promise of their courtship. The couple grows increasingly frustrated as they try to compromise their differences, but often these differences are not compromisable because they have become core values to each individual.

Sometimes, in spite of their different life goals and values, such a couple decides to get married and hopes that the love and respect between them will enable them to work out their differences as time goes on. In our experience, this is usually a mistake, because the differences don't get worked out and they become a source of constant disappointment and friction.

The man you are dating is right that you should reach an agreement about the major differences in your value systems and lifestyle goals before you consider marriage. We think that there is even more to what he is telling you. He cares very much for you but realizes that in the long run your different perspectives will be very difficult to address without either: 1) his pressuring you to lower your level of religious commitment, or 2) him giving up his dream, or 3) you having a distant lifestyle [minimally] during hockey season.

Couples must agree on basic parameters of how their home will be run.

Right now, you're both in limbo, reluctant to make a hard decision that might mean breaking up and moving on with your lives. However, we believe that you must make that hard decision now, not later. Couples who marry should be on the same page in terms of their expectations for the future, and should agree on basic parameters of how their home will be run and how they would like to raise their children.

If you cannot come to an agreement about this after a few serious, long discussions, we do not believe you will be able to do so, no matter how much longer you try. More time spinning your wheels is only going to add to your frustration and prolong your pain.

Further, hoping that the marriage will "work out as you experience it" is also a recipe for frustration, because each of you will secretly hope that the other will eventually accept your point of view, and will be angry, disappointed and resentful when this does not happen.

We know that this will be a difficult and possibly painful process, but we hope that you will address these crucial issues sooner rather than later.

How to Get Over a Break-Up

Dating Maze #260 - Warm-up Exercise
Should I Break Up, Get Engaged or Keep Dating?
Time Is Your Precious Commodity
A Constant World in Flux
Comments
MOST POPULAR IN Dating
Our privacy policy