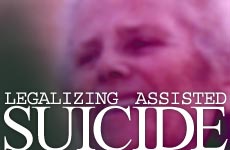 Last week, the Dutch Parliament officially legalized what has been common practice in the Netherlands for many years: the killing of patients by doctors.

Their illnesses need not even be terminal for patients to qualify for the now-legal administration of a lethal poison. And, needless to say, the procedure is not reversible. But still, there are controls built into the law: patients must clearly request to die, and their physicians must feel convinced of their sincerity. Children seeking to have their lives ended, moreover, can only do so if they are at least 12 years old. And, if under 16, they will need their parents' approval.

Assisted suicide may prove the wave of the future. The Johnny Appleseed of medical euthanasia, Jack Kevorkian (affectionately known to many as "Dr. Death"), has achieved near folk-hero status among some liberal minded folk. Oregon already permits doctors to help patients end their lives, though the lethal drugs must be administered by the patient. And even The New York Times has euphemistically advocated "more humane policies for easing the last days of the terminally ill" - leaving the rubbery phrases "humane policies," "last days" and even "terminally ill" for future clarification.

Jews, by contrast, have a clear religious tradition on the matter: even a moment of human life is invaluable.

While Judaism teaches that life in this world is not all there is. This world alone is the place for accomplishment. And even a tiny slice of time can be used to accomplish much. A smile can be shared, a kind word spoken; an apology can be offered, or a regret confronted; repentance can be achieved or peace made. Even people who seem unaware of their surroundings or entirely unconscious may well be functioning inwardly, spiritually, in meaningful ways.

That is the Jewish understanding of life's inherent worth. Modern society, however, has a very different take.

From the nearly non-stop portrayals of death and violence in what passes for contemporary "entertainment" to the all-too-real carnage on our cities' streets, the idea of human life as sacred has become increasingly unfashionable. In a world where youngsters regularly murder for a car, a pair of shoes or even just "for fun," or where women routinely decide to stop an unborn baby's heart to accommodate their own personal or professional goals, an elderly or infirm person's life just doesn't command the consequence it once did.

Nor have some of the elements of the "intelligentsia" been hesitant to assist in the devaluation of human life.

Peter Singer, for example, the famed Professor of Bioethics at Princeton University's Center for Human Values, has proposed the termination (even without niceties like consent) of what he calls "miserable beings" – people whose lives he deems devoid of pleasure. His support of involuntary euthanasia and infanticide is not likely endorsed by most academicians, but the expansion of once-fringe ideas is precisely what slippery slopes are all about.

Professor Singer knows that. Once society jettisons "doctrines about the sanctity of human life," he predicts, it will be "the refusal to accept killing that, in some cases, [will be seen as] horrific."

How tragically ironic that those are the views of a son of Viennese Jews, refugees of the murder-machine that was the Third Reich. Or that another 'member of the tribe', Israeli artist, Uri Lifschitz, echoing the Nazis' own language, has opined that society's time and energy should "be directed toward improving the race, not nurturing the handicapped."

"Those who are incapable of taking care of their needs," he added, "should die of hunger because they are useless."

Not mainstream views, perhaps, but they are clearly in the current of public discourse. And even in contemporary America, where there is still considerable public aversion for assisted suicide and euthanasia, doctors report that both occur in American hospitals much more frequently than most of us realize. One can only imagine what would happen if medical killing were given the imprimatur of legality here it now enjoys in the Netherlands.

We live in times when the elderly and diseased are rapidly increasing in number. Modern medicine has made great strides, increasing longevity and providing cures for many once-fatal illnesses. Add skyrocketing insurance costs and the resultant fiscal crisis in health care, and life runs the risk of becoming less a holy, invaluable divine gift than... a commodity.

And every businessman knows how important it is to efficiently turn over one's stock, to clear out the old and make way for the new.

Societal shifts toward the acceptance of medical murder tend to happen in stages. As the current shift proceeds in our country, all Americans would do well to recognize that long falls often begin with small stumbles. And those of us who are Jews should consider as well that we have a responsibility not only to live our lives in consonance with Torah but also to proclaim the truths of our holy tradition to the larger world.

That is what our ancestors did in ancient cultures that celebrated paganism and immorality.

And what we must unabashedly do in a modern culture that devalues life.

With thanks to Am Echad Resources.

Happiness: the Fuel for a Meaningful Life

Magnify Your Genius: Michael Jordan and Staying in Your Strength Zone
The Promise Of The Land
Which Chat Are You On?: Parshas Behar/Lag Ba’Omer
Do You Like Slow-Cooked Food? Thank the Jews
Comments
MOST POPULAR IN Personal Growth
Our privacy policy