The Jewish Ethicist - Saving for Your Children 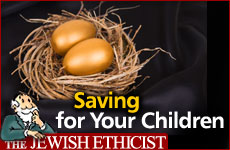 Children should be given a good start in life, but there is no need to provide for the forever.

Q. I think it's important to leave a legacy to my children. How much should I save towards this end?

A. The sages of the Talmud had a nuanced view of bequests. On the one hand, they strongly encouraged a person to leave the bulk of his or her assets to their family, and not give it all away to strangers or charity. But saving specifically for a legacy is also not encouraged. Children need to be given a good start in life; afterwards we should be most concerned about our spiritual legacy.

The following two stories from the Talmud seem to show a particularly dismissive attitude towards saving for grown children.

Shmuel said to Rabbi Yehudah: Sharp-witted one, grab and eat, grab and drink; for this world, whence we must depart, is like a wedding feast. Rav said to Rabbi Hamnuna: My son, if you have, enjoy; for in the nether world there is no enjoyment, and death will not wait. And if you say, I would leave it to my children? Who can promise provision in the nether world. People are like the plants of the field; these flourish and these whither. (1)

Today we might interpret this as saying, make sure you children know you expect them to be self-sufficient, and that they shouldn't rely on you for financial security. In the world of the Talmudic sages the message is a bit different; nobody has true financial security; rather, we fulfill our earthly responsibility to earn a living and trust in God that He will provide for us through our efforts. Likewise, we have confidence that God will provide for our children; however, with regard to them there is not even any responsibility to exert ourselves for them; they have the responsibility to exert themselves for themselves and their families.

However, there is also a very well-known story which seems to have the opposite message. "Choni the circle-maker", who in time of drought "threatened" God that he would not leave his circle until He brought rain, was later involved in the following incident:

One day he was traveling and saw a man planting a carob tree. He said to him, how long will it be until it bears fruit? He said, as long as seventy years. He said, are you certain you will live seventy years? He said, I found a world with carob trees; just as my fathers planted for me, so I plant for my children. (3)

(Rabbi Shimon Golan explains that Choni, who was so impatient that he impertinently demanded that God provide rain this instant, needed a reminder that God's providence looks over the long term, and not always the here and now.)

The message seems to be that it is appropriate to make sure that your children have productive assets that will enable them to make a living, rather than piling up possessions to leave them after you are gone. This theme is also evident in the Torah commandment of the jubilee, which requires that even if a person has sold a field, when the jubilee year comes around the field must be returned to the person or his heirs, thus providing them a minimal basis for their livelihood. (Leviticus chapter 25.) However, the main responsibility of providing children with a livelihood is when they are young, to give them a good start in life when they start a family. It is considered a mitzvah (the fulfillment of a Divine commandment) to provide a youngster with instruction in a trade so that he will be self-sufficient later on. (4)

At any rate, if a person does have assets when he passes away they should be given to the heirs. We find that many commandments of the Torah relate to the disposition of estates, and the following Talmudic story is also instructive:

When [Mar Ukva] died, he said: Bring me the accounting of my charity donations. He found that it amounted to seven thousand dinar. He said: My provisions are light and the way is long; he immediately gave away [to charity] half of his possessions. (5)

Although Mar Ukva felt that giving additional charity was a foremost priority, in order to increase his merit as he approached the World of Truth, note that he did not give away all his possessions. His legacy to his children was equally important to him. Indeed, the 16th century authority Rabbi Moshe Isserless writes that if a person leaves a vague will stating merely that his assets should be disposed "in the best way", they should be given to his children, for this is the best way to divide someone's estate. (6)

The Chasidic tradition has an interesting interpretation of this principle. God grants each person material resources in order to carry out his mission in life. However, our mission is so vast that a person cannot complete it in one lifetime. However, our children are meant to carry on our spiritual mission in this world. Thus it is logical that they should also inherit any wealth that is left over when we die. This is like the baton we pass our children in the relay of the generations. (7)