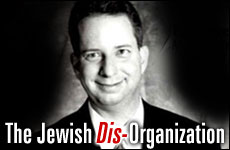 A stand-up comedian struggles to find his way through the maze of the Jewish Dis-Organization.

There are two things about being a comedian and doing Jewish Events; first, getting hired for the event and second, everything else. The Jewish Organization becomes the Jewish Dis-Organization.

It's an honor to be honored, because when you are honored it's an excuse for other Jews to eat

The old committee shrinks down to the ‘fan' holding a funny tape and not enough people there to watch it and give the thumbs up. They can vote on the comedian but still have to bring it to the new committee, ‘cause let's face it, it's another excuse for a danish. At this point, if you're lucky you might get "a definite maybe, we're not 100% sure, it's up to the committee."

What happens by this time is somebody has lost the tape. "I thought you had it. They thought I had it and you know something I've had it. I didn't lose the tape. Call him up and say we need a new tape." Hurry up and wait, the name of a bad musical or my life story. So they call and finally they get their act together to check out the new tape. They figured out who they are going to honor and now it's time to pick a comic. "We saw your tape. Can you do 30 minutes?" Sure. "Well we need 40." That's fine. " Of course if 40 is fine, 50 is better." Let me be the judge. "Can you keep it clean?" Well, sure wasn't my tape clean? "Yes." I'm a clean comedian. I respect clean. " Okay, we love you. Just keep it clean. There are going to be people there with ears." My act is so clean, once a week I take it to a mikva.

My act is so clean, once a week I take it to a mikva.

So, the gig is confirmed. They did three re-counts at a Hadassah in Boca. A contract is sent. Then there are a few phone calls about flight, hotel and where the welcoming committee is going to take you to eat every waking hour they can think of. There's a great Chinese place we go to. There's a deli. There's a sandwich place and if we can get a reservation, a fish place. That's all just on the way from the airport to the hotel. What kind of food do you want backstage? The show isn't till next March. They want to know what I want to consume for the next 11 months.

Sometimes they call and ask you to do a few favors. "One of our members, Eddie Zuckerberger, has agreed to give us some of his frequent flier miles for your ticket. We hope you don't mind. We need you to work around blackout dates. We got you something for Wednesday night, a redeye, but you'll be able to rest up for the show on Saturday. Then we got you a redeye back next Tisha B'av. I didn't know you could take El Al from Los Angeles to Cleveland with a stopover in Tel Aviv."

I just did a show out in LA. They were installing a new rabbi. Only Jews can install a rabbi. They hire non-Jews to install everything else in their lives, but a rabbi, that, they install. They can install a rabbi, but ask them to install a water-filter, forget about it. Maybe a battery? A rabbi and a battery. C'est Levine. After the show, they hand me the old tape. They found it. Good thing, just in the nick of time. Even though I killed ‘em they were unanimously undecided.

Click on the video below to see a clip of Steve Mittlemen performing live.

Steve Mittleman is a nationally recognized television personality and stand up comedian. He's been on the Tonight Show with Johnny Carson and Jay Leno, Late Night with David Letterman, and has played opposite Steve Martin in the movies Roxanne and Out of Towners. If you’re interested in contacting and or hiring Steve Mittleman you do so via his website: www.FunnyJewishEvents.com.

The Haunted Smile
Why Are The Prayers Of Yom Kipur So Repetetive?
Ha'azinu 5783: A Time for Unity!
Twisted Thinking
Comments