A Nihilist on Anti-Semitism 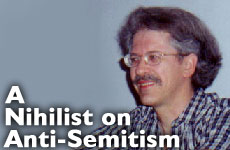 The LA Times gives op-ed space to a professor who has called for the destruction of the State of Israel.

On Dec. 28, The Los Angeles Times published two, opposing op-ed pieces on the resurgent wave of worldwide anti-Semitism. Remarkably, the debate wasn't about what to do about the problem, but rather if a problem exists at all.

ADL Director Abraham Foxman cited, among other recent events, the viciously anti-Jewish statements of the Malaysian Prime Minister, the synagogue bombings in Istanbul, and the burning of an Indiana holocaust museum, to conclude:

"Anti-Semitism is not a relic of history but a current event. Its resurgence is stronger and more widespread than even the most pessimistic among us predicted. And the threat is growing...Democratic leaders and good people must stand up -- for their own sake as well as for the sake of Jewish communities --so that the theme of "never again" will be a living reality."

Foxman's words were deemed debatable by the Times, who invited Michael Neumann, a philosophy professor at Ontario's Trent University, to counter Foxman with an article entitled "A Minor Problem, Overblown Neumann claims that anti-Semitism just shouldn't concern us today, and supports his view with arguments such as this:

"Concentration camp survivors still alive deserve sympathy and justice, but they are few. Myself, I'd feel a bit embarrassed saying to a homeless person on the streets of Toronto, much less to the inhabitants of a Philippine garbage dump: 'Oh yeah? You think you know suffering? My grandmother died in a concentration camp!'...Perhaps anti-Semitism is not, after all, a high priority."

The LA Times accorded Neumann a prominent space to air his views, despite the fact that Neumann has an established record of actively supporting (in Neumann's own words) "vicious racist anti-Semitism" to bring on the destruction of the Jewish state. Last year, Neumann had a correspondence with an anti-Semitic web site called the Jewish Tribal Review in which Neumann wrote:

"My sole concern is indeed to help the Palestinians, and I try to play for keeps. I am not interested in the truth, or justice, or understanding, or anything else, except so far as it serves that purpose...I would use anything, including lies, injustice and obfuscation, to do so. If an effective strategy means that some truths about the Jews don't come to light, I don't care. If an effective strategy means encouraging reasonable anti-Semitism or reasonable hostility to Jews, I don't care. If it means encouraging vicious racist anti-Semitism, or the destruction of the State of Israel, I still don't care."(http://www.jewishtribalreview.org/neumann2.htm)

In response to this outburst, the Canadian Jewish Congress wrote a letter of complaint to Neumann's employer, Trent University. As the matter attracted greater attention, Neumann repudiated the statement (without denying its authenticity), then apologized to the CJC.

The Jewish Tribal Review originally contacted Neumann after another article of Neumann's claimed that "we should almost never take anti- Semitism seriously, and maybe we should have some fun with it." In that article, Neumann goes so far as to not only compare Israel to Nazi Germany, but to indict world Jewry for complicity with Israel's "crimes against humanity":

Our questions to the LA Times:

-- If Michael Neumann's nihilism and deep hatred for Israel are a matter of public record, why did the LA Times grant his voice the legitimacy of their opinion page?

-- Would not a more responsible debate for the Times op-ed page have been: How to deal with the troubling new wave of anti-Semitism?

Ignoring Sderot
Bechukotai 5782: Divine Retribution
Behar 5782: Working to Live or Living to Work?
The Wholeness of Being Broken
Comments
MOST POPULAR IN Media Objectivity
Our privacy policy