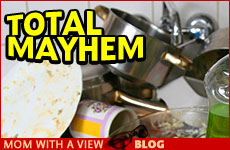 It is complete chaos in my house -- and it's the most wonderful thing in the world.

During Temple times, the whole Jewish community throughout the land of Israel was required to converge on Jerusalem three times per year. Although the total population far exceeded the space capacity of the Temple, everyone had enough room. How could this be? Jewish understanding explains that this phenomenon was due to the unity of communal purpose and lack of individual ego.

So I could be forgiven for thinking that when my whole family came home for their sister's wedding and the upcoming Passover holiday, we would have a similar experience.

Alas, I have since discovered that we are not as holy or as elevated in our characters as I had previously imagined us to be.

My husband has calculated that we have about 180 square feet/person. That would actually be fine if it weren't for the suitcases from my daughter in seminary, the duffel bags from my son in the Israeli army, the luggage from my married kids that came for five months (yes, you read that correctly!), my other married children who came for five weeks but with enough baggage and baby paraphernalia for the aforementioned five months, as well and the suitcases of various shapes and sizes belonging to my daughter and her new husband and filled with all the "stuff" they need for their move to Israel.

The only uncovered surfaces are the ones where my granddaughter is busily mushing chocolate cookies into the carpet! (Did I mention that Passover is coming?)

It is complete chaos in my house -- and I mean that literally, not just as a figure of speech.

And when I'm not exhausted, or heating up a second pot of pasta because the first didn't make enough, or running to the grocery store because the fridge is empty again, I recognize that this is the most wonderful thing in the world and that I have a lot to be grateful for.

I remember reading a book about a young woman who was hospitalized with a catastrophic illness. All she could think about was how much she had complained about getting up with her infants in the middle of the night and how much she would give to be able to that again!

So I'm not complaining (much!) and I'm thanking the Almighty (a lot!). And I'm learning that even though we don't have perfect unity (okay, not even close) or still retain some semblance of ego (okay, a lot of ego!), it's still miraculous that we're all here celebrating together, laughing together, and even fighting...(Well maybe I'll take that last one back.)

Our homes are supposed to be miniature Temples. Although the resemblance is more limited that I realized, we are working on it. And getting a tremendous amount of pleasure along the way.

And if the price is some noise, some mess and some lack of privacy (said the mistress of the understatement), then so be it. I wouldn't have it any other way.

Although my mother-in-law did recommend ear plugs. And cleaning help. And a cook. And a live-in masseuse...

It Never Rains in California in the Summer

What Kind of Attention?