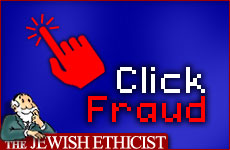 I'd like to help out a struggling business. Can I click on his web ads in order to generate revenue for his site?

Q. I'd like to help out a struggling business. Can I click on his web ads in order to generate revenue for his site?

A. Let's give some background to this question. In traditional advertising, the advertiser would pay a media outlet a fixed fee for a particular advertising space, whether a newspaper ad, billboard, or anything else. The entire burden of market research is on the advertiser to evaluate if the medium is reaching his customers. The internet created a new degree of accountability in advertising; the advertiser can know exactly how many people viewed the page; exactly how many people clicked on the ad, if it is one that leads to the advertiser's web page; and even how many clicks led to a sale. So now in additional the traditional "column inch" method, we have three new methods: pay-per-visit ("per eyeball"); pay per click (PPC); or pay per sale (commission).

The rub with the PPC method is that it can be gamed. Buying a product to generate a commission is both unusual and harmless; rates per visit are usually so low that making fake visits has little impact. But it is not hard to click repeatedly on an ad to generate meaningful revenue for the site or the advertising firm.

When this is done by or formally on behalf of the beneficiary it is a clear violation of the agreement and is known as click fraud. Click fraud is a crime in many places and grounds for a lawsuit anywhere. So if the business is asking or encouraging you to boost their PPC income by repeatedly clicking on ads, they are violating their agreement and the clicker is aiding and abetting them.

Your question relates to something more innocent: an unaffiliated third party who is simply interested in helping the business.

The practice you describes involves a number of ethical difficulties. One is your taking action to influence an arrangement between two other people where you have no direct interest in the matter. Jewish law takes a dim view of this practice. Here are two examples:

The Talmud states: "'And who has done wrong among his people' (Ezekiel 18:18) – Rav said, this refers to someone who comes with a power of attorney." (1) The commentators explain that this doesn't mean any person who uses a power of attorney to act on behalf of someone else; after all, that's what a power of attorney is for. It refers to the case where the litigant is perfectly capable of bringing suit on his own behalf, but for some reason is refraining or delaying. If some third party then swoops in and aggressively prosecutes a case in which he has no personal interest, he is involving himself in someone else's affairs. Rashi's commentary mentions the verse in Proverbs (26:17), "Like someone who grabs a dog by the ears, is a bystander who meddles in a dispute not his." (Perhaps this is the source for the phrase "Let sleeping dogs lie", meaning "don't revive a dormant feud".)

Another interesting parallel is the case of someone who sells a debt. In many cases, someone who sells a bill of indebtedness is still formally entitled to forgive the debt; at the time of the loan the debtor borrowed from one particular lender knowing his habits, and obtained an inalienable right to have the lender waive payment. However, someone who waives a debt after he has sold it is liable for the full amount. It's none of his business to intervene in a debt now involving two other people. (2)

All this applies only to repeated clicking. There is certainly nothing wrong with a site urging visitors to "Please support our site by taking an interest in the services of our advertisers." A single visit to the advertiser's site, even without any serious interest, is a fulfillment and not a frustration of the pay per click scheme. Ultimately all they are paying for is a chance to expose their services to the public, and by clicking once you give them that.

The Jewish Ethicist: The Extortion Game

Finding Meaning in Hollywood
What Makes Eli Run?
The Tyranny of Materialism
Science Enters the Mysterious Inner World of Consciousness
Comments
MOST POPULAR IN Current Issues
Our privacy policy