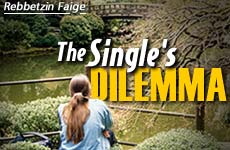 Joy in life is not a product of "a set of circumstances, but a set of attitudes."

Many people despair that it simply cannot be true that "there is someone out there for everyone." It is simply a problem of supply and demand: there are more worthy and quality females out there than the available male counterpart population.

So assuming that we all get the situation that we are able to deal with and need at any given point, and in recognition of all that singles endure with diminishing returns, can it be said that such folks one day, probably in the Next World, will be on a higher level than those "reverse mirror images" who by the grace of God had nary a problem in getting married?

Isn't it easier to be a Jew in New York than in Milwaukee, in Jerusalem than in San Diego? Everything is relative. The easier things come, the less appreciation there is of the true cost.

And this concept can go for any situation of greater vs. lesser fortune -- one who rises above a handicap is on a greater level than someone not so challenged, although we trust that the true reward in this world is but incidental.

Looking forward to hearing your thoughts on this matter. Thank you. HK

While perhaps one needs to be "in it" to fully understand, as our sages comment, "There is no wiser than a person challenged," some points might be appropriate and relevant even if they do come from the "outside" looking in -- looking in, I might add, with constant heartfelt prayers that the Almighty bring joy to gladden the lives of those who suffer.

It is not within the scope of human beings to calculate the extent of another person's pain or to be the judge of who suffers the most and hence has earned more mileage in eternity.

I don't think it is within the scope of human beings to calculate the extent of another person's pain or to be the judge of who suffers the most and hence has earned more mileage in eternity. God alone "knows the innermost recesses of the heart." Circumstances of one's life, as important as they are, are only one piece of the picture. What about an individual's inner recourses based on their coping abilities and their mental health? What about events of the past, influences of their upbringing that often shape their attitudes and perspectives in a limiting and negative way? There are many factors that constitute a person's life, most of them not accessible to the casual observer.

Recently, in the span of a few hours, two women who came to see me poignantly captured the irony of the human condition. Eileen is married with a houseful of children. Her marital relationship is a conflicted one and her children, in part, because of the lack of a harmonious structure, are difficult and demanding. She shared with me that more and more frequently she entertains the fantasy of leaving her overwhelming and burdened life and joining the ranks of competent singles who get more immediate gratification and positive feedback in the work world and who have nobody to worry about but themselves.

Within moments, literally, Sherry walked in and proceeded to describe the familiar landscape of the single's life, the loneliness, the biological ticking of the clock, the empty void born of not having achieved the expected purpose of a woman's life, a purpose so clearly part and parcel of the fabric of Jewish existence, etc. At a superficial glance, what for Eileen was an albatross, heavy and oppressive, was the substance of Sherry's fondest dreams. As ironic as this seems, they are not exceptional cases. "The grass is always greener on the other side" mentality is ubiquitous and seems to have been with us since the beginning of the human race.

Consider the recent Torah narrative dealing with the life of Jacob. Jacob was "a wholesome man," pure and trusting whose aspiration was simply to sit immersed in the quiet life of Torah study. Clearly God had other plans for him. He was thrust into a life of turmoil, mandated to expand his horizons in all directions. He was besieged by the enmity of his twin brother, a father-in-law who was the master of deceit, and a search for one woman that culminated in his being married to four women. His life began in total poverty and a desire for nothing more than "bread to eat and clothing to wear" and ended challenging him with serious wealth. The simple life he sought, the peace and tranquility he yearned for, was transformed into a series of painful tests and challenges -- the death of his beloved wife Rachel, the rape of his daughter Dina, the sale of his treasured son Joseph into slavery by his own brothers, his exile into Egypt, etc. Consider also the fact that Rachel, who was Jacob's eternal love, craves children without which she sees herself, as she puts it, "as dead." Conversely, Leah, her sister, who has many children, desires only Jacob's love. In sum, the Almighty's orchestration of events remains for us mortals totally inscrutable.

I have not yet met anyone who has everything. And it does appear that more than appreciating what we do have, we are desirous of that which as yet eludes us.

Having said that, it must be emphatically stated that we are enjoined to pray arduously and continually for what in our estimation is missing in our life and for what we perceive as necessary for our well being and fulfillment. The caveat is that we have to reserve a space of deference in our yearning and supplication, a clause that recognizes the Master of the Universe as the ultimate "Knower" of what's best for us.

Ultimately, Rachel was blessed with children and Leah was vindicated and buried with Jacob, and Jacob's life, challenged though it was, produced the twelve tribes who founded the Jewish nation. We have to trust that it's God's script that will bring us to our ultimate destiny. Moreover, it is only His script that can take into account, in addition to everything else, the mystical concept of reincarnation, of previous lives that inform our present existence. As for us, until all the puzzle pieces fall into place and clarity replaces our finite vision, our efforts need to be directed at changing our "why" questions to "what" questions. Given God's script at this moment, what is the most productive and constructive course to chart? Our lives, upon self-evaluation, need to be meaningful and justifiable day to day, moment to moment, given what we have. Squandering the precious gift of life in bitterness and torment over what is not yet ours is adding insult to injury and is the ultimate betrayal of what is in our own best interest.

The bottom line, for all of us, based on my personal experience, is that joy in life is not a product of "a set of circumstances, but a set of attitudes." I believe that a working positive attitude can only be forged by a balance between putting forth our best efforts -- in study, deed, and prayer, -- and then stepping back and "letting go and letting God." This posture is not only liberating, but also grants its bearer a demeanor and disposition that has magnetic force and that people are drawn to.

My blessing is that the Master of the Universe grants us that which is the best interest of our ultimate well being.

My Mother's Faults
Why Are The Prayers Of Yom Kipur So Repetetive?
Ha'azinu 5783: A Time for Unity!
Twisted Thinking
Comments