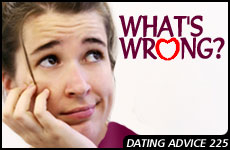 She's plagued by a nagging feeling that "something is off."

What are the differences between 'attraction' and 'chemistry'? What I mean is, when dating, if all your 'boxes' are ticked about a person's personality and view on life, and you are attracted to them, does there need to be something more?

From the time I first started dating Adam, I saw potential. So much about him seemed to fit. I was attracted to him and I liked his personality. There also are no major bumps in the road, although there are still some minor issues that I still have to work out.

However, I think something is missing. We've been going out for many months, and I believe that a promising courtship should progress to engagement rather quickly. I'm not looking at a timetable, but even so I don't feel an overwhelming sense of "I want to be with him all the time." In fact, for the past month my feelings about him have been sort of static. I feel that there might not be enough chemistry, but I'm not sure what that is. All I know is that something doesn't feel wholly right.

Is ‘attraction' the same as ‘chemistry'? Or is it an independent thing that makes two people always want to see each other and be with one another? I'm very confused and have this tight nervous feeling that I can't seem to get rid of. Are my concerns justified, or am I expecting more from than is realistic? I have to sort things through. I don't think I can go on like this much longer.

It sounds like you began your present courtship with a realistic attitude: "This person seems to have the basics that I am looking for, and let's see where it goes." You liked his personality, and you were attracted to him. That's a good way to feel at the beginning of a courtship. The fact that there were no major bumps in the road is also a plus. "Minor bumps" are okay, and are often par for the course.

However, after many months of dating-for-marriage, we've got some concerns. One is that you haven't yet been able to resolve the minor "bumps" in the road. These are issues you should be able to come to terms with over the course of a few weeks. If you aren't, then maybe they are more significant than you first thought.

What concerns us more is that you haven't developed more affection for him over the past month or so. Most of the time, when a couple is right for each other, their mutual feelings continue to grow. The fact that this isn't happening leads us to think that you may be trying hard to make something work that just isn't right.

Let's try to distinguish between ‘attraction' and ‘depth of affection.' The latter is something that should be present before two people become engaged. You can be physically attracted to someone, feel they are right for you on paper, admire qualities about them, respect them, and even feel that you are connecting to them on a certain level, but still fall short of feeling that "I like him so much... I look forward to being with him... I miss him often when we are not together... I feel a sense of comfort with him... I like the idea of building a life with him."

After months of dating, you should be feeling some strong emotions.

You don't have to want to be with someone all of the time for him to be right for you, but after months of dating, you should be feeling stronger emotions than you have described. That underlying anxiety you feel may also be a message that this man isn't right for you. This nagging feeling that "something is off" usually isn't present in the "right" relationship.

But please, do not end your courtship solely on the basis of what we've said here. We're only responding to what you've described in your letter, and it could be that there are nuances, or factors, that you haven't described here, that would generate a different response from us. We suggest that you talk over your feelings, and our observations, with someone who can serve as a mentor -- such as a happily-married person whose wisdom you value. Hopefully, you'll be able to decide if it would be better to end the courtship, or if you do have stronger feelings for this man that you are holding back for some reason.

If you decide to end things, we'd like to give you a bit of encouragement. It can be disappointing when a courtship comes very close and then ends. However, many people draw great hope from such an experience, because it confirms for them that the right person is out there, and not too far away.

We wish you success and hopefully, the next one will be the right one.

Dating Maze #223 - Emotional Shut-Down
Korach 5782: Visit to Lift the Spirit
That Time The Ivy League Found A Way To Limit Jewish Enrollment
Would You Rather Be Right or Happy?
Comments
MOST POPULAR IN Dating
Our privacy policy