In the Comfort of Our Own Living Room 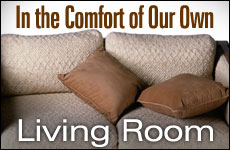 Marrying off three daughters in 14 months was just the lead up to grand finale.

If I had only half a second in which to describe my home, I would easily blurt out, "24/7." With eight children of our own as well as nephews, nieces, neighbors, students and friends traipsing in and out at all hours of the day and night, life never seems to quiet down. The walls of our Jerusalem home stretch to their limits and beyond to accommodate all of our guests and extended family. On many a weekend, we decorate the living room floor with wall-to-wall mattresses to accommodate the sleepovers. We often squeeze at least 20 around the Shabbat table, sometimes more.

Looking back, it's hard to imagine that more than 25 years have passed since my wife, Leah, and I were the latest newlywed couple on the block. The years flew by in a blur of school meetings, chicken pox, diapers, giggling, family trips, homework, bruised knees, late notes and hundreds of other activities.

Then, suddenly at the tender young ages of 45 and 46, we married off our three oldest daughters, all three within 14 months. That's when we learned the real meaning of the word "busy." We did not stop running, planning, arranging and shopping for 14 months straight.

By the time the last wedding rolled around, our family picture was something special; my wife and I as two young parents, my mother, my in-laws, a magnificent bride, five children aged three through 15, three new sons-in-law and our two oldest daughters well into their pregnancies'.

Keeping with Jewish tradition, we feasted for the seven days of Sheva Berachot after each wedding. Each day another close friend or relative hosted the festivities. That's a total of 21 parties, excluding several engagement parties. We finally reached the end of the last party somewhere on the far side of midnight. My wife had gone home to collapse. I stayed behind to say goodbye to our newest in-laws who were returning to the U.S.

Fortunately, our next in line would only reach marriageable age in another five years or so, so we looked forward to a good rest and a nice long period of calm.

Urgent pounding on the bedroom door yanked her out of her dreams. "Shoshana needs you!"

My wife had just gone to bed. It took her about two seconds to fall asleep and she slept soundly for at least a minute. Urgent pounding on the bedroom door yanked her out of her dreams.

"Shoshana needs you!" our usually very quiet son-in-law shouted through the door. "Now!"

Pulse racing, my wife jumped out of bed, pulled on her robe and dashed to the living room. "Something's wrong," Shoshana cried, her face wracked with pain. "I think I'm giving birth."

"When did the contractions start?"

"They just started, but they're strong, very strong."

"I'm afraid they can go on for quite a while," my wife sympathized. "For first time mothers, it can take all day. Then when the contractions get closer and closer and much stronger, the baby comes. That's just the way labor is."

"No Mommy, I don't think so. Something's wrong! Something is wrong! They're very close, very strong, now!"

My wife realized that this might not be regular labor. "Lay down on the couch... no, sit in the arm chair. I'll call an ambulance."

Less chance of her giving birth while sitting, my wife thought to herself as she ran to the phone (well, it made sense at the time). While Leah called, our teenage son helped Shoshana put on her shoes so that she could walk to the ambulance.

"Is this her first?" the dispatcher asked over the phone.

"Yes it is," my wife responded.

"When did she go into labor?"

Here comes another first timer, the dispatcher obviously thought to himself, probably rolling his eyes. "Then you don't have to worry," he said patiently. "Labor takes quite a while. For first time mothers, it can take all day. Then when the contractions get closer and closer and much stronger, the baby comes."

"They are very strong and very close, right now," my wife asserted. "I am a nurse! I have given birth eight times. This is not regular labor. Come now!"

"Make sure your front door is unlocked, ma'am," the dispatcher said in a low, steady voice. "We'll be right there."

I received the breathless call from Leah as I drove leisurely towards home, reflecting sentimentally on all we had accomplished during the past 14 months. "Shoshana's having the baby. I called an ambulance. Come home! Quickly!" By the time my wife finished, I had left the speed limit far behind.

Leah slammed down the phone to the cries of, "Mommy, Mommy! The baby's coming!" She dashed across the room and slid to the floor in front of Shoshana. "The baby's coming! The baby's coming now," Shoshana screamed. My wife reached up. The head was out! In a second, the shoulders followed. My wife grabbed them and guided the baby out. Fortunately, the umbilical cord was not wrapped around the baby's neck.

As she delivered her first grandchild in the middle of her own living room, one sentimental thought kept going through my wife's mind. He's so slippery. I hope I don't drop him. My wife immediately held the baby upside down to clear his lungs and pinched his foot to make him cry. The baby seemed healthy. He cried immediately. Wife and daughter seemed healthy too. They also cried immediately. Leah wrapped the baby up tightly in her robe to keep him warm and waited for the medics.

At that moment, I screeched around the corner of my block, right behind the racing ambulance. I burst into the apartment hot on the heels of the medics, to the welcoming cries of my ninety-second-old, first grandchild. My daughter sat slouched in the armchair like she was relaxing. My wife sat on the floor cradling the most beautiful baby in the world. The umbilical cord connected all three of them.

"Look," my wife cried out. "We have a beautiful baby boy here!"

I was totally speechless.

I looked at my wife; she looked at me. I knew that our thoughts were in sync. Wow! Did we just become grandparents in our own living room? That's typical.

A flick of the wrist sent her to the side of the living. Fifty-five years later we were welcoming her newest great-grandchild in Jerusalem.

And I looked back about 55 years, a mere ten years before I was born. My mother stood shivering on the parade ground of Auschwitz, dreading the outcome of the latest selection. Her dark, brown eyes bore into Dr. Josef Mengele's evil eyes, not wavering for even a second. I may be skin and bones, she silently declared, but I am strong and I will survive. A flick of the wrist sent her to the side of the living. Fifty-five years later we were welcoming her newest great-grandchild in Jerusalem.

The trauma and excitement of that miraculous November night just short of five years ago has since faded into special memories. My wife and I are still doing our "24/7" job of raising a large family. There are still unmarried children and lots of guests. We settled right into our new role as grandparents and wait in excited anticipation for each visit from our children and grandchildren. Life is good.

But once in a while, as we watch our four-year-old grandson race around the living room, followed closely by his younger sister, two younger brothers and bunch of younger first cousins, we relive that special night. We peek at the armchair and smile. This is where it all began, and what better place than in the comfort of our own living room.

A Love by Choice

Slovie's Letter to Her Son on His Wedding Day

Birthday Blues
The 21st President of the United States: Failure or Inspiration?
Hiding Their Jewishness
The Jewish Pope: Following the Questions Home
Comments
MOST POPULAR IN Family
Our privacy policy
Aish.com Is Looking for Great Writers