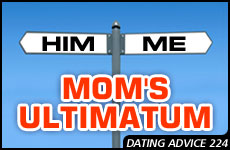 It's time for her to grow up and find herself.

I have been dating a man for the past year. My mother has just announced that she is forcing me to break up with him or move out of her house. I am 20 and in college. The man I'm dating had a bad childhood and because of this, my mother says that his thinking is skewed. He has a leader personality and I have a gentle one. My mother says that he is causing me to think like him now and she needs me to get away from him.

My mother wants me to take a year off from him with no contact at all and finish college. I have always submitted to my mother because of my personality. I have always been unsure about life situations, and she seems to have all the answers, so I've made a habit of asking her. She also has a very "leader"-type personality.

The man I'm dating has told me that I have never chosen to think on my own, and I need to start doing that since I am an adult. Looking back, I see that I've had a hard time making decisions and feeling confident in my own choices. So now I've made a decision to think on my own, and my mother says that I have completely changed and I'm not anything like I used to be.

I have always had a very close relationship with my mom, best friends even, yet now she is forcing me to choose between this man and her. What should I do?

It's hard to be forced to make a choice between your mother and a man. However, it seems to us that the best choice for you to make is a third one -- choosing to know yourself and to become more self-confident and assertive. This is a vital part of the growth process that is called separation/individuation. It involves learning to be your own person and not to be dependent upon a parent or someone else (even a spouse) to make decisions for you and to manage your life.

You have no way of knowing if the control and manipulation is being done with your welfare in mind.

You describe yourself as being unsure about life situations, and dependent upon your mother to think for you and to make your choices. This personality trait leaves you very vulnerable to being controlled or manipulated by someone who has a stronger personality. Because you are so unsure of yourself, you have no way of knowing if the control and manipulation is being done with your welfare in mind, or because the other person wants to promote his or her own agenda -- even though it really isn't good for you. Sometimes, it is a mixture of the two. For example, your mother probably gives you guidance with the best intentions. However, since you don't have a strong point of view, or aren't used to thinking for yourself, the advice she gives you and the choices she makes is skewed to reflect her point of view, rather than yours.

After reading your letter, we envisioned a few possible scenarios that explain why your mother wants you to break up with this man. She may be concerned that he is controlling or manipulating you, or that he is taking advantage of you somehow. She may be worried because she believes your personality makes you vulnerable to being controlled or manipulated, and may actually have seen certain things about your behavior with this man that cause her to believe he is controlling or manipulating you.

It is also possible that your mother sees certain qualities in this man that she doesn't like, or that make her worry about your being together for the long term. Even if she doesn't see specific behaviors that worry her, the fact that he comes from a difficult background would cause most parents concern. No matter how nice a person he may seem to be, any parent would want to know that he has addressed the issues that could interfere with his ability to be a good spouse and father. Many people overcome difficult upbringings and go on to be a stable, giving and loving spouse. However, we've often seen that people from difficult backgrounds who don't work through their "issues" can carry around baggage that adversely affect their marital relationship.

We don't know which of these scenarios accurately explains what is going on in your life. However, your mother isn't a villain, no matter what the real scenario is. She does care for you and is trying to do what she thinks is the best for you.

It's not a matter of ‘choosing' between your mother and this man. It's a matter of finding yourself.

In addition to finishing college, your focus right now should be on learning more about yourself -- who you are, what you want out of life, what values are important to you, your likes and dislikes, and what life journey you would like to take. It's not a matter of ‘choosing' between your mother and this man. It's a matter of finding yourself.

The best time to begin this voyage of self-discovery is right now. You are on the cusp of young adulthood -- this is the age that most young adults become their own person. Because you are so unsure of yourself, and accustomed to relying on your mother to direct your decision-making, we don't believe that you can embark on this journey of self-discovery without help. We recommend that you find a competent third party, a trained therapist, to help you go through the process of separating and individuating. Your college probably has an office of student services that can recommend professionals who can help you.

We suggest that you meet with a few of these people, rather than simply taking the first one who is recommended, to get a sense of who they are and if you can be comfortable working with them. It is important that the therapist be someone who encourages you to find your own voice.

You won't be able to take this vital journey without loosening some of the ties to your mother and to this man. We recommend that you take a dating hiatus, not because of your mother's ultimatum, but because he shouldn't be a major influence as you explore who you are. We know that it might be difficult to take a break from someone you care about, but it is a necessary investment in your future. We've seen too many people "wake up" later in life with the realization that they never really discovered who they were. And invariably, they wind up resenting their partner because of it. We'd rather you build a long-term relationship -- whether with this man or with someone else -- after you have a better sense of yourself.

It may be that your decision to get therapy will cause some repercussions at home as well. It may be hard for your mother to see the changes that you go through as you learn to be more independent. Hopefully, your therapist will be able to help you restructure your relationship with your mother, so that you can remain close, but in a different way.

We wish you the best of success,

Dating Advice #5 - What You See Is What You Get

Dating Advice #246 - Perfect on Paper
Don’t Believe in Other Gods Versus God is One
Seeing Without Eyes
Why Shouldn’t We Eat Whatever We Want?
Comments
MOST POPULAR IN Dating
Our privacy policy
Aish.com Is Looking for Great Writers