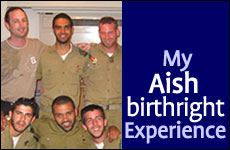 I discovered just exactly why I had always felt proud to be a Jew.

I was raised in a small town in the Midwest called Zanesville, Ohio. My Jewish exposure was minimal -- I attended Sunday school on a weekly basis, and took two years of Hebrew school to prepare for my Bar Mitzvah. While I always felt connected to my Jewish community, I realized upon coming to college that the most important aspect of Judaism was nearly overlooked. Sure, I could read Hebrew and lead a service, but I knew next to nothing about the course of the Jews through history and the State of Israel. And although I could perform various Jewish rituals and mitzvot, I did not understand the roots of these things. 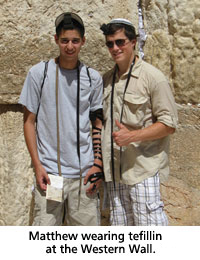 My Aish birthright trip to Israel changed all that and more. In Israel, I had the most amazing resources surrounding me at all times. All the questions I had had in my head since Sunday school were fair game, and I picked the brains of our two rabbis liberally. These rabbis showed me a side of Judaism packed with millennia of Jewish experience: we immersed ourselves in the holiest mikvah in Tzfat, climbed Masada and relived the Roman invasion, and danced to welcome in Shabbat right next to the Western Wall in Jerusalem with thousands of Jews the world over.

The relationships I formed on birthright were truly unforgettable. For me, the most significant friendships were formed with the Israeli soldiers that accompanied our group. Talking with these soldiers was so powerful, especially when asked about war. One soldier described an experience so moving that the entire room was brought to tears. The level of trust and appreciation we all felt for these soldiers, formed in just a few weeks-- was quite special.

I felt like I was at home, despite being thousands of miles from where I grew up.

In Israel, I felt safer than ever, despite being located in what the media describes as a "war zone". I felt like I was part of a huge family, despite not knowing a single person before leaving Zanesville. I felt enlightened about Judaism and the history of the Jews, despite being challenged to see both sides of the story. I felt like I was at home, despite being thousands of miles from where I grew up. Finally, and perhaps most importantly, I discovered just exactly why I had always felt proud to be a Jew.

Now, in my third year at Duke University, I have adopted some observances -- some, but not too many, because Rome was not built in a day. For example, I bless things before I eat or drink them. Also, I no longer eat pork or meat and cheese in the same meal. I learned in Israel that the way in which one expresses his or her Jewish identity can take any form it wants, and that is what I strive to do. Once a week I meet a rabbi to talk about the weekly Torah portion, the State of Israel, or any other local Jewish affairs in order to stay connected. Judaism is not something that I can passively be a part of -- I have to own it by staying involved.

When I think back on my first trip to Israel, I am constantly reminded just how profound an affect it had on my life. Birthright with Aish was so full of experience, friendship, and growth that I cannot imagine a future experience even coming close.

Forgiving the Kapo
Olivia Newton John’s Grandfather was a Nobel-Prize Winning Jewish Physicist
Don’t Believe in Other Gods Versus God is One
Seeing Without Eyes
Comments
MOST POPULAR IN Israel
Our privacy policy
Aish.com Is Looking for Great Writers