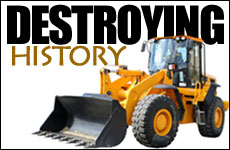 No one really cares. But that puts me in an elite group: It includes two of Israel's most prominent Jerusalem archaeologists (Gaby Barkay and Eilat Mazar) -- and me. And a few religious or Zionist kooks. That's about it.

Meanwhile, the Muslim Waqf goes on tearing up Jerusalem's Temple Mount, where once the Jewish Temple stood. The week before last, they hit an ancient wall that might be the foundation of a wall from the Second Temple complex built by Herod the Great.

It's an old/new story. For the past 35 years the Muslim religious authority known as the Waqf, to whom Israel has been given custody of the Temple Mount, has been periodically digging it up -- illegally. (That's the Israel Supreme Court's characterization.) Several years ago, for example, the Waqf used mechanical equipment to dig a huge hole for a wide stairway down to a greatly expanded underground mosque, dumping hundreds of tons of dirt from the mount into the adjacent Kidron Valley.

When Zachi Zweig, a graduate student of Barkay's, started looking for antiquities in the Waqf dump, the Israel Antiquities Authority had Zweig arrested for digging without a permit. Since then, Barkay has obtained the permit and, with Zweig, they have engaged in a multi-year project sifting this archaeologically rich dump. They have found thousands of ancient artifacts going back 3000 years, including a seal impression of a probable brother of someone mentioned in the Bible.

Now the Waqf wants to lay new telephone and electric lines on the mount. Under Israeli law, in an area that might contain antiquities, the trench must be excavated by professional archaeologists. (The same holds true for construction: Such areas must first be professionally excavated, most often by the Israel Antiquities Authority.) The Waqf simply ignores this law, however. A few weeks ago they began digging a utilities trench almost five feet deep, often going down to bedrock. Worse still, the workmen were using mechanical equipment--anathema to any professional archaeologist in such a site.

It's certainly all right for the Waqf to lay new telephone and electrical lines. But there would seem to be no reason why the trench could not first be excavated by professional archaeologists who dig by hand and with great care to document the context of all discoveries--no reason except the Waqf's unwillingness to recognize Israeli law.

On July 18, 2007, I published an op-ed piece in the Wall Street Journal, headed "Biblical Destruction," protesting the Waqf excavation. It has had no effect. Since then, the excavation has been extensively expanded.

Observers have reported seeing numerous antiquities in the excavated dirt and in the trench, including mosaic tesserae, a quantity of pottery vessels (some of which had been freshly broken by the tractor scoop) and carefully carved and decorated building stones typical of the Second Temple period. Last week, as I said earlier, the excavation hit part of an unusually wide wall that has now been destroyed. It could well have been part of the Temple complex.

Barkay and Mazar continue to protest vehemently and publicly. But they have mostly been met with silence. The archaeological community as such has not raised its voice. Each archaeologist is concerned with his or her own dig, not someone else's violation of the antiquities law. And why jeopardize a career by making trouble when all the well-known political names and faces remain silent? Yes, a few newspaper articles have appeared, but nothing serious. The Antiquities Authority has been queried on several occasions about this violation of Israel's antiquities laws -- on Judaism's holiest site -- but the response has always been the same: "No comment."

This thundering silence perhaps explains why the Israeli embassy in Washington has not provided any account or explanation of this depredation on the Temple Mount. Why raise questions and create a problem when nobody really cares?

Ed. Note: If you care and do not want to remain silent, click here to send the Israel Antiquities Authority your note of concern:

Shelve the Shelf Agreement
The Promise Of The Land
Which Chat Are You On?: Parshas Behar/Lag Ba’Omer
Do You Like Slow-Cooked Food? Thank the Jews
Comments
MOST POPULAR IN Middle East
Our privacy policy