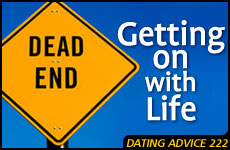 She's stuck on a man who's headed for a dead end. Should she join him down that road?

I've been dating a man for nearly two years and we both want to get engaged. I'm 22, just graduating from college. He just turned 30.

The problem is his maturity level is holding us back. He has a dead end job, cannot seem to go to work on time, and is barely able to support himself, let alone a family. When I raise my concerns he promises to improve and assures me that when we're married I'll be the motivation he needs.

This is very frustrating as I fear he'll never improve. And yet I don't want to lose this wonderful man. But I'm ready to get on with my life. Should I keep waiting?

It seems to us that in the almost two years you've been dating the man you hope to marry, you've gotten to know him well enough to answer the following questions about him and your relationship:

We suspect that the answers to many of these questions will be negative ones. If that is the case, we can pretty much assure you that what you see now is what you will get in the future. Even though this man insists he will change after the wedding and become more responsible, the greater likelihood is this will not happen.

Further, it is unfair for him to put the responsibility on you to motivate him to change. Motivation to change has to come from within an individual. He's setting you up for blame -- if he ends up trying to change and fails, he'll say that you weren't helpful enough, not supportive enough, or were too much of a nag.

Many people make positive changes in their lives after they marry, but this is because married couples learn from each other and adapt to each other, often bringing out the best in each other. In addition, after marriage, people may make other changes in their lives as part of the normal process of human growth, such as becoming more religiously involved, returning to school, changing careers, becoming active in community or charity work, and/or focusing on improving a character trait. All of these changes arise because the individual is internally motivated to make them.

Some people are late bloomers. They spend their early adulthood pretty much living for the moment, but at some point decide to formulate long-term goals and start working to achieve them. Others are more like you seem to be -- goal-oriented and focused while in their early 20s. Many times, a late bloomer and a younger adult find that they are very compatible and can go on to build a good life together. It appears, however, that this man hasn't reached the late-bloomer stage and may never blossom at all.

We never recommend marrying someone in the hope that they will change after marriage. That's because a person's motivation to make these changes is strongest before marriage -- when he wants to find favor in the eyes of the person he hopes to marry! In our experience, someone who doesn't take steps to become more mature and responsible before marriage has little incentive to do so afterward.

What will happen if you marry this man and he doesn't make the changes he promises? Can you be happy? Can you have the marriage you hope to achieve?

We always recommend that couples who are contemplating marriage share compatible values, goals, and expectations about how to travel the path of life. Do you and this man share these elements, or is he simply saying "yes" to your dreams in order to appease you? Now is the time for you to clarify that you have these vital foundations for marriage.

We suggest that you sit down with him and discuss your separate and mutual dreams and plans for the next one, five and 10 years. Each of you should express your goals as a couple, and as an individual -- in terms of careers, financial expectations, lifestyle expectations, family structure, religious observance, and community involvement. Do you share many similarities? What steps are each of you taking now to implement these goals? What steps is each person taking on his or her own to accomplish these goals individually and for the two of you as a couple?

If you don't have compatible dreams and expectations, if you are each not comfortable with the pace the other wants to take to achieve them, or if one of you does not want to immediately begin making measurable progress to realize these goals, then you have a problem that you may not be able to resolve.

You want your beau to change so that he will become a responsible, mature individual who can be your partner in life. In your particular case, these seem to be qualities that are important to you, but are not necessarily important to him. If they were, he would have begun to make them.

You need to clarify the reality so you can, as you say, get on with your life.

Dating Maze #227 - Loving Insults
Should I Break Up, Get Engaged or Keep Dating?
Time Is Your Precious Commodity
A Constant World in Flux
Comments
MOST POPULAR IN Dating
Our privacy policy