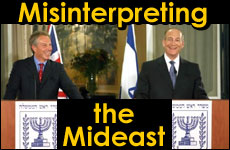 Until they get past these four mistaken assumptions, foreign envoys can do little to calm the region.

After a few years of benign neglect, Israel is back on the itineraries of well-meaning foreign emissaries. Former British Prime Minister Tony Blair visited the country last month in his new role as special envoy of the "quartet" of Middle East peacemakers. Earlier this month, U.S. Secretary of State Condoleezza Rice arrived. Each visit was concluded with a news conference at which promises of progress were made. But before any lasting on-the-ground movement toward peace can be achieved in the Israeli-Palestinian conflict, foreign emissaries, as well as some Israelis, will have to shake off some long-disproved tenets of the conventional wisdom about the dispute.

There are four main misconceptions that diplomats bring with them to Israel. Primary among them is the idea that solving the Israeli-Palestinian conflict is a prerequisite for stability in the Mideast. The truth is that the region is riven by clashes that have nothing to do with Israel. For instance, the Jewish state plays no role in the conflict between Shiites and Sunnis, between Persians and Arabs or between Arab nationalists and Arab Islamists.

The second misconception is that Israeli territorial concessions are the key to progress. The reality is that an ascendant jihadist Islam believes that it is leading the battle against Israel and the rest of the West. Given this dynamic, Israeli territorial or other concessions simply fill the jihadists' sails, reinforcing their belief that Israel and the West are weak and can be militarily defeated.

The Mideast's central conflict is not territorial but ideological. And ideology cannot be defeated by concessions.

True, a majority of Israelis supported Israel's unilateral withdrawals from Lebanon in 2000 and from Gaza in 2005 in the belief that meeting Hezbollah and Palestinian territorial demands would nullify the cause of conflict between them. We now know the results: The Hezbollah and Palestinian reactions -- concerted terror wars, kidnapped Israeli soldiers, rockets fired at Israeli cities -- made clear that the Mideast's central conflict is not territorial but ideological. And ideology cannot be defeated by concessions.

Emissaries also still believe that "the Occupation" blocks agreement between Israelis and Palestinians. In the West, the term usually means the territories Israel conquered in the Six-Day War in 1967. If the problem between Israelis and Palestinians were just the 1967 territories, and the solution were dividing those lands up between the two sides (as proposed, most recently, in 2000 by former Israeli Prime Minister Ehud Barak), the conflict would have ended long ago.

Instead, the heart of the problem is that many Palestinians -- Fatah and Hamas, in particular -- and even some Israeli Arabs use "Occupation" to refer to all Israel. They do not recognize the Jewish people's right to an independent state, a right affirmed again and again in the international arena.

Finally, the well-intentioned visiting diplomats believe that the Palestinians want -- and have the ability -- to establish a state that will live in peace alongside Israel. But they are not being clear-eyed. The late Palestinian leader, Yasser Arafat, established a thugocracy that never improved the basic living conditions of his people. Indeed, Palestinian unemployment and poverty are worse today than they were before Arafat and his cronies assumed power in 1994.

Palestinian Authority President Mahmoud Abbas did not take responsibility for Gazans' welfare, which in part led to Hamas' electoral victory in 2006. Now confined to the West Bank after Hamas kicked his Fatah organization out of Gaza, Abbas has not moved to create a governmental structure.

A corollary of this fourth misconception is the belief that economic development can neutralize extreme nationalism and religious fanaticism, thus clearing the way toward peace and security. David Ben-Gurion, Israel's first prime minister, had a term for such believers: "naive Zionists." Those who fit this description should demand that the Palestinians explain what they did with the $7 billion in international aid they received over the years. Seven billion reasons for economic progress -- and yet, why did Palestinian mobs destroy the Erez industrial zone, where Palestinians worked and ran businesses for decades, on the Gaza border? Why do they attack safe roads linking Gaza and the West Bank? Why is the Palestinian economy in shambles?

Shorn of these mistaken assumptions, the picture in the Middle East is disturbing indeed. No wonder emissaries hold on to them. So what to do?

For starters, Western governments and their emissaries must refrain from pressuring Israel for territorial or security concessions, which at best produces only short-term gains and emboldens the Islamist terror groups. Instead, they should try to persuade the Palestinian leaders to commit to a long-term strategy premised on educational, political and economic reforms that would lead to the establishment of a civil society that cherishes life, not death; values human rights and freedom; and develops a middle class, not a corrupt, rich elite. At the same time, these governments should set up an international fund that would offer Palestinian refugee families aid -- say $100,000 to $200,000 a family -- for their resettlement on the condition that their acceptance of the money would signify resolution of their refugee status.

Under no circumstances should emissaries attempt to open a dialogue with Hamas. For the sake of Palestinian society, Hamas and its ideology must be defeated. The Israeli-Palestinian conflict is not the most significant today; it's the battle between jihadist Islam and the West, of which Israel is merely one theater. To defeat jihadist Islam, the West must overcome the regimes, organizations and ideologies that support and feed it -- and Hamas is foremost among them.

The emissaries who travel to Israel must draw on their rich diplomatic experiences, free themselves from misconceptions about the Palestinian-Israeli conflict and the petty politics that flows from them -- especially the binds of political correctness -- to lead us all toward freedom, security and peace. Anything else is mere meddling.

Moshe Ya’alon is a former defense minister and IDF chief of staff.

San Bernardino and the State of Israel

Remembering the Six-Day War: A Fact Sheet
Should I Break Up, Get Engaged or Keep Dating?
Time Is Your Precious Commodity
A Constant World in Flux
Comments
MOST POPULAR IN Israel
Our privacy policy