What Empty Nests are Filled With 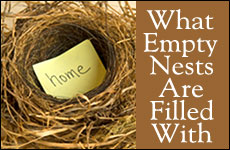 On that Friday night, I got a vision of how I want my nest to look when it is no longer filled with little ones.

I'm sure the Fines have completely forgotten about me. They would no doubt be surprised to discover how often I think of them. After all, our relationship was brief and fleeting -- my family and I slept in their home one Shabbos, and then we parted ways. That visit, though, gave me a vision which I will hold onto for decades.

We met the Fines four years ago, when we spent Shabbos in Boro Park, New York. My brother had just gotten married to a wonderful girl from Boro Park, and the whole crew had converged on the neighborhood to be able to attend the festive Sheva Brachot meals held for the bride and groom the week after the wedding.

Not many people were eager to put up a couple with three young children, one of whom was a colicky seven-week old baby. The Fines found it just fine. "We have several empty bedrooms that they are more than welcome to use. We'll probably sleep right through the baby's cries. And if we do hear her, well, it will be nice to have a baby in the house again."

We arrived at the Fine home several hours before Shabbos. The decor was Spartan. The rug was well-worn, the furniture simple -- no ornate lamps or art deco coffee tables here. The main decorations upon the walls, and every available surface, were pictures. Beautiful brides stood beside youthful grooms in a seemingly unending parade of wedding portraits. Toothless babies and impish toddlers smiled beside baby blocks, watering cans, and other Sears' photography props.

In short order, we discovered that the Fines had 12 children, all married, and an undisclosed amount of grandchildren. We played Jewish Geography for a while. I didn't know their daughter in Jerusalem, but her neighbor was my good friend. And my second cousin lived in the same small town where their fourth son had chosen to live.

I liked Mrs. Fine immediately. She was a straightforward, kind woman in her early sixties who said what she meant and meant what she said. Her husband was a quieter, male version of those same traits. My children were making themselves at home, a situation which would normally cause me a fair amount of stress when staying with strangers. Here, though, our hosts seemed to genuinely enjoy our children's exuberance.

It was Friday, and we all had much to do. After our initial conversation, we went upstairs to unpack, and the Fines bustled around finishing last minute preparations for Shabbos. We both lit candles. Following an ancient tradition to light two for the dual commandment to keep and remember Shabbos, and then one for every child, she lit two ornate seven-branched candelabras, and I, five tea lights. Then, I hurried over to my new sister-in-law's home to join the festivities.

We were halfway through the meal before I realized that I had forgotten diapers for the baby. My toddler was cranky and needed a bed. I scooped up my toddler and set off for the Fines. I knocked lightly and let myself in, as instructed. The first thing I heard was singing. The Fines were singing Shabbos songs together, her soprano beautifully complimenting his ringing baritone. Their singing was like their personalities -- simple yet rich. They engaged in no fancy harmonies, no trills or embellishments. But you could tell they were thinking about the words they were singing.

On my way to the steps, I had a clear view of their Shabbos table in the dining room. The couple was sitting near each other, empty china soup bowls in front of them. At the end of the table fourteen candles flickered. On the wall beside them was a photo taken three years earlier, at the wedding of their youngest child. It was a portrait of the children with their spouses -- 24 people surrounding the Fines. It looked like a small army.

I lingered at the foot of the stairs. It was the atmosphere more than the scene itself which struck me. Even now, I grope for the words with which to describe the peace, the fulfillment, the contentment the Fines exuded.

"Empty nest" has always struck me as such a sad term. Once, the nest was full of babies, alive with action. Now it's a hollow shell, devoid of the spark it contained. I've had many a moment when I've dreamt of the day when my children will be grown, married, and in homes of their own, while I enjoy blessed, uninterrupted peace. Despite that, a finger of fear strikes my heart when I hear someone talk of an empty nest. Will the second half of my married life be spent listening to the echoes of what once was?

That vision is a reminder, a call to action.

The Fines allowed me to glimpse an empty nest that was full. Filled with the couple's mutual respect and admiration. Filled with the sense of satisfaction which comes from raising children and watching them all put down roots of their own. Filled with pleasant memories which sustain rather than mock. On that Friday night, holding my toddler, fetching diapers for my infant, surrounded by my fledgling birds, I got a vision of how I want my nest to look when it is no longer filled with little ones.

That vision is not simply an amorphous image in the back of my mind, patiently waiting out the decades. For as obvious as the Fine's contentment, was the fact that such a state does not simply arrive as the last child steps out the front door. It is the accumulation of years and years of building a good marriage, of keeping one's priorities intact, of building the type of home in which one would wish to spend the remainder of her days. That vision is a reminder, a call to action. It prompts me to keep abreast of my husband's life and inner world, reminds me to carve out time for the two of us in the midst of the bustle of life with little people, and calls me to raise my children with respect, so we part in love and not in anger.

That vision has become a personal dream. No longer do I fear an empty nest. I think of a simple home in Boro Park, and dream of contentment, of unity, and of flickering flames, one for each of the lights I have set upon this earth.