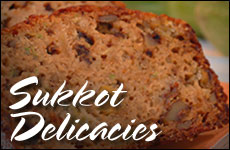 Some hearty, tasty and healthy recipes to keep us warm on the cool pre-autumn nights.

With the holiday of Sukkot fast approaching, I'd like to share some hearty, tasty and healthy recipes to keep us warm on the cool pre-autumn nights. These recipes are sure to be filling, and can be used either for the holiday meals themselves, or for some real home cooked intermediary day (chol Hamoed) meals as well.

This is a great soup, that even my kids like, and it's almost a full meal unto itself. The smell it emits while simmering is out of this world and will fill your home with the inviting aromas of a really good meal on its way.

Serves 6-8 people, depending on how hungry they all are...

Cut off as much of the fat on the meat pieces as possible without ruining the meat.

Place the onion in a large soup pot. Add the olive oil to it and start to sautee it on a medium heat. Add the meat pieces and brown them well on all sides.

Turn the flame down and add the carrots and celery. Let this cook for five minutes together with the meat, and then add the mushrooms, water and all else. Turn up the flame again until the soup starts to bubble. Turn down the flame and simmer for 2-3 hours. Serve immediately. If you happen to have anything left over, this freezes well also, but chances are, you won't have to worry about that!

Here's another great and really simply holiday chicken recipe that is super special.

This recipe makes enough for two whole chickens, cut into quarters or eighths. If you want to do only one chicken at a time, just use less marinade.

Here's a good homemade Italian dressing recipe for those who either don't want to use the store bought versions or prefer a healthier alternative:

Mix this up or even better, blend it with a hand blender for a few minutes. It tends to separate, but blending it with the hand blender helps alleviate this problem. Pour off one cup of this dressing and pour it over the chicken pieces. The rest, you can use over a fresh salad that goes great as an accompaniment to this chicken recipe!

Spray a large roasting pan with a bit of cooking spray. Layer the onions and garlic on the bottom of the pan.

Discard the marinade that the raw chicken sat in!

Put the breadcrumbs into a plastic bag, together with the rest of the parsley flakes. Using a fork, place each chicken piece into the breadcrumb bag, shake to coat it well, then lay it down on top of the onions and garlic in the pan, right side up. Do this to each piece. Layer on the olive slices on top of the chicken pieces. If you don't have both kinds of olives, it will still come out fine to use only one or the other kind.

Cover the chicken pieces with a piece of baking parchment paper and then with foil, leaving one side of the foil very slightly open so some steam can escape. (I put baking parchment paper on top of the food so that the foil won't touch the food and cook into it.) Slide it into the oven and bake for 65 minutes. Uncover the chicken and bake for 10 more minutes uncovered, to crisp it up a bit more. Serve alone or along with some rice.

A great dessert idea, easy and different, is excerpted here from my newest cookbook, A Taste of Challahwww.TasteofChallah.com (Feldheim Publishers, May 2007). At times, I also use it as a "kugel" idea for the day meal on Shabbos, alongside the chulent!

This "bread" has no yeast and is more the consistency of cake. This recipe makes two standard loaf pans' worth, or three small ones. Although it is in a book about challah and breads, when eating this zucchini ‘bread', the blessing said before eating it is "mezonot."

Beat eggs, vanilla, oil, and sugar together until thick. Add in the pineapple, zucchini, baking soda, baking powder, salt, and cinnamon. Then add in the flour, and on top of that, the raisins and walnuts.

Tip:
It's always best to add the raisins on top of the flour as once the raisins are coated with flour, they will not sink down to the bottom of whatever cake or muffin they are in, where they may burn.

Mix until this just until it is completely blended together and resembles a thick batter.

Pour into loaf pans that have been lined with parchment baking paper and bake at 350°F / 180°C for 45 minutes to an hour. They are done when a cake tester or knife inserted into the middle comes out clean and only very slightly sticky. These loaves stay moist and slightly sticky inside. Slice and serve, or freeze for later use.

Enjoy and have a great chag! Tamar Ansh

Tamar Ansh is an author, freelance recipe developer, and food columnist. Her food articles have appeared in Jewish publications worldwide. Her other publications include: Splitting the Sea (www.targum.com); Let's Say Amen!, an illustrated children's book (www.feldheim.com); and her first cookbook, which is both gluten free and kosher for Passover, A Taste of Tradition (Feldheim Publishers). All her books can be viewed at www.TasteofChallah.com

Tamar Ansh is the author of seven books, hostess and creator of The Jerusalem Challah Experience and food writer about, of course,challah – but also, at the opposite end of the chometz spectrum, about Pesach and non gebrochs.Pesach Anything's Possible!, now in its 6th (at least!) printing, and has helped thousands worldwide to cook and serve their very own delicious, POSSIBLE, and easy Pesach. It’s perfect for anyone from beginners to fully experienced Bubbies, as well as for kosher non-gebrochs year-round use. Aaaand...This year when you use this link to buy the book, (or you get it in Jerusalem from me directly) you will get an amazing bonus of a gorgeous menu planner based on the book with ideas for the first AND last days of Pesach. So get your copy today and enjoy your Pesach (and cooking!) this year!

Eggs: Recipes for the Nine Days

When It has to be Nice

Chopped Liver
Scientific Curiosity and the Divine Encounter
Mind Over Milkshakes
Love the Convert
Comments
MOST POPULAR IN Family
Our privacy policy
Aish.com Is Looking for Great Writers