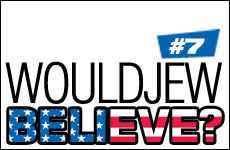 The Date: July 29. The Place: Orlando, Florida. The Event: The 2008 National Scrabble Championship. The Winner: New Zealander, now residing in Malaysia, Nigel Richards, a 30-something engineer. The Prize: 25K. Final Score: Richards-412, Brian Cappelletto-401.
The Hot Word: "Shuln," the plural of shul. Wait. Wha ... ? SOMEONE QUICK! GET THE DICTIONARY! THAT'S NOT ALLOWED. IT'S ... YIDDISH!

We all know that Yiddish and Yinglish have entered English lexicon, but you know you've "arrived" when Yiddish words are kosher in Scrabble. And many are! In addition to "shuln," shlep, shlub, shlumpy, shmaltz, shmo and shmooze are now acceptable in the Dean of word board games. So, next time you play, don't be a "shmo" ... a little "shmaltz" and "shmooze" can get you 25K, which in my book, is worth the shlep!

PROBLEM: You're at a Kosher resort calling Mama to describe the mmm-so-good fleishig (meat) – especially the brisket, and those "to die for" milchig (dairy) cheese blintzes, when, horrified, she stops you in mid-moan. "Wait! They were both on the same steam table?" she inquires. "Don't touch! The steam made everything treif (unkosher)!"

This was the steamy problem that faced Dov Zioni, and other Israeli engineers at the Institute for Science and Halakhah, where Jewish law is applied to technology. .

LOGIC: He used the "Dog test!" to determine first, that steam is food, in accordance with the Halachik criterion – "If dogs won't eat it, it's not food." Steam, of course, is condensed water which dogs drink. Hmmm. The challenge then, was "de-fooding" the H2O destined for the steam table. What then, turns the doggie palate off?

THE SOLUTION: Dov experimented and found it! Add a bissel pine oil to Rover's water bowl and his canine palate will howl in protest. Such steam then, is not food, and hence ... we have "kosher" steam!

Not a good time for Britney Spears. No kidding. The courts know it, producers know it, the ex knows it, her fans know it. Oh, and not only does she know it. She's "un"- proclaiming it. Not long ago she had a Hebrew healing tattoo removed. Originally inspired to "go ink" in 2004 by Madonna, the Kabbalah celeb queen, it seems Britney felt "hypocritical" sporting the tat given her less than healed life. Of course, had the troubled singer known that "tattoos" are "no-nos" for Jews, she would've "gotten" the fact that she shouldn't have gotten the thing in the first place, and wouldn't need yet another "healing" experience!

Jackie Mason! Free associate, and I'll bet you the word "sensitive" is not among your top ten picks. So imagine my surprise when I first met the legendary comic 20 years ago and found that right below the Shmoozer lies a Mr. Sensitivity. Picture it. 1986. The Borscht belt stand-up, who took a hit from Ed Sullivan, was now himself, a hit – on Broadway -- with his "World According to Me." Interviewing him required only two things: 1.) Getting his attention; 2.) An addiction to corned beef. Because that's all you were getting ... "with a half-glass tea. You'll have half, I'll have half... there's plenty for two, nu?" I was making progress with number one. But number two? I love deli. My DNA has a D-gene. For deli. But my digestive system ... oy. I finally got him alone. We were meeting in his lobby on Park Avenue. Fency-dency and deli-free, right?

Interviewing Jackie Mason requires only two things: 1.) Getting his attention; and 2.) An addiction to corned beef.

Wrong. Jackie was jubilant. Guess what just opened that week across the street? My colon spasmed its disapproval.

As we walked in, two of the Israeli owners plotzed with joy. "Wait! A picture! Signed! For their wall!

By the time the black and white cookies came out, Jackie had taken no less than 25 pictures, and stopped by each table with a bissel shtick. Smiling and joking, he happily returned to the table.

"Pssst," he whispered. I leaned in closer. "Sha! Don't say. But the food here ... Khalushes (hideous)! Oy-oy-oy! Did you taste that corned beef?! Shhh! (Taste it? I had enough to feed all the Jews in Jersey.) That corned beef ... it could kill a person. Are they hearing? " he asked, waving at the owners who were still waiting for the troops from Queens and Brooklyn to arrive for a group shot. "I don't want they should hear. Oy ... you have more napkins?"

"For what?" I wondered. And then I noticed it. Despite all his flinging and flying, there was no food left on his plates! And then I saw it! After another friendly wave to the owners, I witnessed the most disgustingly caring event I had ever seen or were to see, by a celebrity.

In between the shmoozing, oohing, and ahhing, Jackie had taken bites out of everything ... then put the half-eaten morsels in napkins, which he deftly hid around the deli. .

Brooklyn and Queens arrived. "So how was the food?" the group asked eagerly. "Ai-ai-ai! I tell you honestly, there isn't a place in this deli I couldn't find a nosh!" he said enthusiastically, as he put his arms around the five Israeli owners for that final picture – and wished them great "Mazel!"

From that day forward, when I hear the name "Jackie Mason," the first thing I think of is that bissel taste of lousy corned beef – but the first word I think of is "Mensch."

Coming to a Theatre Near Jews!
Should I Break Up, Get Engaged or Keep Dating?
Time Is Your Precious Commodity
A Constant World in Flux
Comments
MOST POPULAR IN Jewlarious
Our privacy policy