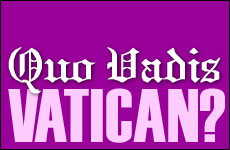 Reviving the Latin mass without first eliminating the anti-Jewish language gives tacit encouragement to those who wish to return to the demonization of Jews.

The news that Pope Benedict XVI has authorized a wider use of a
previously discarded version of the Latin mass has set off a storm of
criticism among interfaith groups, especially Jews.

The reasons for this should be easy for the pope to understand. The
service -- known as the Tridentine mass -- was discarded for use in the
Catholic Church decades ago for a number of reasons. For one, it
contained language about "perfidious Jews," as well as a prayer at
Easter that called for the conversion of Jews, and referred to their
"blindness" and living in "darkness."


While the "perfidious" line was spiked by Pope John XXIII in 1959, the
Easter prayer for conversion remains in the mass, which may, thanks to
the pope's ruling, now be used by churches around the world. The pope
defended his move by pointing out that this mass had been used for
generations. Taking away the restriction ends a schism within the
church -- one that had led to excommunications of traditionalists who
preferred the old Latin mass.

Those who would urge non-Catholics to avoid comment on what is, in many
respects, a purely internal liturgical question, have a point.
Catholics don't need Jewish approval for the form or the wording of
their prayers, anymore than Jews should be dependent on a Catholic nod
for their services. Moreover, Jews who pray in Hebrew, even when many
of us don't speak the language, should not presume to lecture Catholics
who embrace worship in Latin.

But one line in the pope's defense of his position betrayed the
problem. He wrote: "What earlier generations held as sacred, remains
sacred, and great for us, too, and it cannot be, all of a sudden,
entirely forbidden or even considered harmful."

With hatred for Jews being fed by a steady stream of invective, how can the Church do something that could give comfort to those who preach anti-Semitism?

Non-Catholics have no right to say what is or is not sacred or great to
Catholics. But it's no offense to interfaith amity to note that
anti-Jewish language and teachings that the Church promulgated for
centuries did indeed do a great deal of harm. In fact, this served as
the foundation upon which the legacy of European Christian hatred for
Jews was built, and it led right to the Holocaust.

The reason that men like Pope John XXIII and Pope John Paul II were so
revered by non-Catholics is that they had the courage to create
fundamental change in the Church on this point. They recognized that
Jews and Catholics must treat each other as brothers in faith, not
rivals. The process of reconciliation these popes began has reaped
dividends in many ways. The Church's recognition of the State of Israel
and its pro-active campaign to change Catholic religious education in
this country and around the world has brought Jews and Catholics closer
than they've ever been before.

But by reviving the Latin mass without first eliminating the
anti-Jewish language, the pope has dealt, in the words of
Anti-Defamation League leader Abe Foxman, "a body blow to
Catholic-Jewish relations." And he's exactly right -- not as much for
the damage that the actual prayer will do, but for its symbolism and
timing.

This move gives tacit encouragement to those elements in the Church and
beyond who wish to return to the demonization of Jews. Though I'm sure
this is not the pope's intention, at a time when anti-Semitism is on
the rise around the globe, and particularly in Europe, it sends a
message that the Catholic leadership is backing away from its
commitment to ecumenism.

With hatred for Jews being fed by a steady stream of invective coming
from the Islamic world, it seems unthinkable that the Church would do
anything that could give comfort to those who preach anti-Semitism.

I hope that American church leaders, as well as other people of
goodwill, will join in urging the pope to rethink this decision, at
least as far as the promulgation of anti-Jewish language is concerned.
Given all the work that's been achieved his predecessors, we pray that
Pope Benedict will not allow the spirit of friendship and common
purpose that has so characterized Jewish-Catholic relations in recent
years to be heedlessly tossed away.

Aish: Proud to be a Jew

Looking at the Horror
Can You Show Me This "God?"
How to Become Immortal
Judaism and Mental Health
Comments
MOST POPULAR IN Current Issues
Our privacy policy
Aish.com Is Looking for Great Writers