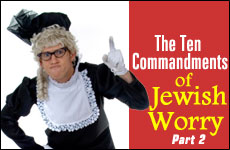 Part two in our series about the "mitzvah" of worrying.

Well, we "worried" our way through a whole other week, and, if you're reading this, Thank God, survived. (Although I've got such a pain in my left jaw that…oy. But who's complaining?) As promised, here are the final Five Commandments of Jewish Worry (six through ten). Oh, and just in case anyone out there didn't catch the first half … worry's an option – or clicking on Part One.

SIX: THOU SHALT FIND THE FATAL FLAW
Many of us have an uncanny ability to find the microscopic hole in the Mona Lisa. Who hasn't heard a Jewish parent say, "You look gorgeous! Perfect! Wait ...

a) ... "is that shmutz on your elbow? (SPITS, RUBS SPOT) In the crease. Is that supposed to be a crease. Your dry cleaner's a goniff (thief)!"

c) ... "have you lost a pound? Everyone tells me how stunning you are, a little zaftig! So now you're becoming an anorexic?!"

"Is that a zit? I'm taking you to the dermatologist – just in case."

My personal favorite came to me from comic and writer, Bill Dana who told me, "I had started earning enough money by writing 'The Steve Allen Show' to get my own New York City pad. I called to tell my mother. 'Ma, wait till you see it! It's in a great neighborhood. You enter and there's a kitchen level and you take three steps down to a living room area, then you step up right to my nice-sized bedroom and bath. Then you step back down from the bedroom to the living room, then two steps down to a den with steps up to a lovely garden behind glass!' Nothing. Then after a minute, she finally said ... 'Don't fall.'"

I personally know nine Jewish people who, despite 2,000 satellite stations, keep all of them set to one: The Weather Channel. I believe that many Jews are closet climate-junkies. They sit, like zombies, staring at dew points and wind chill factors – in Katmandu. And not only do they take it personally, but they feel it's their business to warn their nearest and dearest to "be prepared."

As a kid, I brought enough "wearable weatherproof" to make it to school in event of monsoon or tidal flood and brought "extra" if my mother felt coolish, wettish, or warmish.

When I had my first apartment, if there was lightning on the Eastern seaboard, I was warned to unplug everything with a cord, and store enough bottled water, canned food, and flashlights to rejuvenate the Dead Sea, feed a small African nation, and light up the entire city of Pittsburgh.

When Amy Borkowsky's mother heard that a foot of snow was expected in "outlying" areas of New York City, she left a message warning her to wrap a scarf around her face ... because "that man who climbed Mount Everest lost his entire nose."

No question. In case of, heaven forbid, nuclear attack, all citizens should run to shelters – or apartments of Jewish children.

EIGHT: THROUGHOUT THE LAND THOU SHALT SEE THUGS

If an adult child is "not in" on schedule, it's normal for many a Jewish parent to assume: "she's tied up"– literally. More than eight minutes late, and the alert goes up to "lying somewhere dead on the streets." Officially considered to have "gone missing," Nancy Grace must be notified.

Nancy Grace:"Tell us, Mrs. Goldfarb, when did you last see Sheila?"

You: "This morning! I made her pancakes and milk, 2%– then she left!

Nancy Grace: "On her own! Ya' hear that, viewers! A little girl who drinks her milk and suddenly she's gone missin'. I don't think so."

When I got my first apartment, my father installed so many locks Houdini would've had to call the fire department to get in.

Amy Borkowsky's mother left messages warning her not to wear her red bathrobe when she took out the garbage because her friend's grandson said that red is a "gang color."

"Don't wear your red bathrobe outside because red is a 'gang color.'"

But my friend Adele's mom takes the prize for paranoia. When she heard on the news there was a demonstration scheduled at a Manhattan embassy, she called her married daughter in New Jersey. "Mamala, when you go to the store in Paramus, don't go near Manhattan." Just in case ...

NINE: IT HAPPENED TO THEM, THEREFORE IT (COULD, MIGHT, WILL) HAPPEN TO THOU

You've no doubt noticed in the preceding two "commandments" that there's one primo "Jewish Law of Probability:" If it happened to anyone, anywhere, anytime, better to figure, 99.9% -- you could be next. " After all, if it happened to Uncle Myron's mishpocha's neighbor's son's barber –it could happen to you!.

My late mother heard a report on famine in Africa on the same newscast that mentioned a tsunami brewing near Sri Lanka. At 10 pm, she arrived at my apartment followed by three men from the World Wrestling Federation, schlepping the entire frozen food aisle of "Costco." Just in case. But my late father had her beat. When Patty Hearst and the Symbionese Liberation Army, were photographed robbing a San Francisco bank, I received the following call: "Your mother and I noticed Patty had on a Pea coat – like yours – and we read she's 5'3" – also like you. Promise us, darling! Until she's captured ... stay away from banks.

TEN: ASSUME THE WORST! NEVER BE CALM WHEN THOU CAN CATASTROPHIZE

As we've seen, many a Jewish parent may tend toward slight negative exaggeration and over-reaction. A bissel "worry," then, is really a big tsimmis!

*What if: a toddler isn't running by 12 months? He should be checked for paralysis – just in case.

*What if: your son isn't hungry? He might become a feature, "Boys and Bulimia," on Discovery Health.

*What if: Your daughter isn't home at midnight? Assume she's in a ditch with broken teeth and a ruined rhinoplasty.

True, just in case, to everybody else may be a little meshugge. But for us Jews, "just in case" has been "the case" – far too often. Indeed, those three little words may be one reason we Jews are still around -- to worry – and to laugh.

Green Eggs and Matzo Brei
In the Shadow of David and Goliath
Where Do the Laws of Nature Come From?
Saadiah Gaon, Rashi and Maimonides: How Three Rabbis Revolutionized Judaism
Comments