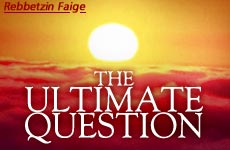 "I'm a Catholic dating a Jewish man who I believe is my soul mate. Why is this an issue for people in his community?"

I am currently dating a Jewish man and I'm a Catholic. At first we just realized we had a lot in common and his being Jewish wasn't an issue. We're finding out now that it matters to the people in his community. My friends and family are very happy for me but his friends and co-workers aren't quite as happy. Why is this an issue?

I'm finding out and appreciating his religion and I respect it. His beliefs are very strong and I'm finding out why. Each day he e-mails me something that he feels I would find
interesting. Everyday is an awakening.

So my question is: Is this a problem? He's very prominent in the Jewish community and I don't want to cause him any troubles. How do we handle this? He's such a wonderful man and we care about each other deeply so I want to make this easy for him, not hard.

I'm not writing this so you can tell me I should move on and forget about him because that just isn't possible. I have found my soul mate and just want to embrace the people that he cares for. I just don't know how to do that.

The Midrash observes that a house that is filled with straw over time will betray that it does not house gold and silver (Midrash Raba, Numbers, 18:17). The straw will begin to jut out here and there. Coming together in marriage requires many normal and routine adjustments. Some of these are: gender differences, coming from different families of origin, having different modes of responding and coping, etc. etc. When these tremors in marriage occur, a conflict as great as differences in religious commitment is an event wherein the straw in the house becomes visible; where the individuals might seriously come to question whether the decision to overlook so serious an issue was in fact well advised.

An important point of information is that Judaism, in contrast to other religions, does not feel compelled to “save” or seek converts to its faith. This position is based on the Torah teaching that righteous people of all faiths can access their place in eternity if they live a good life. They do not have to be Jewish to do so. They travel their road while Jews have their very distinct path to get them to their destination.

There are many choices we are compelled to make in our lifetime. Some can almost be categorized as preferences. Those do not carry with them terribly grave consequences (i.e. what will the color scheme at the next wedding be or will we serve sherbet or nut torte, etc.). While even these decisions do have to be made, the long-term effect will be no more than hours or days at most. In judging the significance of a pending choice, we need to be mindful of the following principle: there is a proportionate relationship between the choice we make and the duration of its impact. The following anecdote might be helpful.

Karen was diagnosed with a life threatening illness. In an effort to get the best treatment possible, she thoroughly researched all her resources, physicians, business associates, friends, and also combed the Internet for the latest advances in the field. She narrowed her options to three specialists and made an appointment to meet with them. After painstakingly analyzing her three encounters, she made her decision. When her family and friends questioned her about the determining factor of her decision, she announced that in the end her selection was based on the pleasing décor of the given doctor's office.

Choosing a religion because it happens to be the religion of the person we are attracted to is like choosing a physician in a life and death situation based on the décor of his office.

The choice of a spouse, while one of the most important decisions in life, is still penultimate to the ultimate decision about our metaphysics. By definition, metaphysics refers to a relationship that is eternal, that stretches beyond the here and now, that exists beyond time and space, and that is not limited to corporeal and material confines. It is a relationship that is everlasting, not subject to death or decay. The God we choose to serve, in the context of the religion that is our legacy or that we have chosen to embrace, is the ultimate decision in life. As awkward an analogy as it might be, to choose a religion because it happens to be the religion of the person we are attracted to, is like making the misguided decision of what physician to use in a life and death situation based on the décor of his office.

I would advise you, dear reader, that the issue of religion needs to be resolved independent of any other agendas. It is the most personal and far-reaching choice you will ever make. God will be with you in times and places that no mortal can ever be. If Judiasm appeals to you, I would urge you to take time off from this relationship and pursue a course of study, avail yourself of knowledge of the history and legacy of the Jewish people, the laws and traditions that both circumscribe and hallow our lives.

A real commitment would entail a willingness to change and ultimately to dedicate yourself totally to this way of life.

To marry a man and expect to practice his religion, for his sake, in order to accommodate the relationship is the gravest of mistakes. Religion, the relationship with your Creator, ought to be your primary concern, hewn and chiseled out of your innermost essential self. It must resonate with your very soul. It dare not be distorted or biased by penultimate ambitions, even one as important as the selection of a spouse.

Anger Management
The 21st President of the United States: Failure or Inspiration?
Hiding Their Jewishness
The Jewish Pope: Following the Questions Home
Comments