Believe in Your Kids 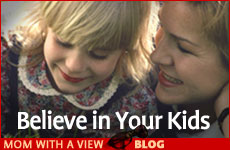 Despite any disability, we have the choice to lift our children up or bring them down.

When I was in college, I had a close friend named Val. It's been a while since then and Val and I lost touch long ago. But the lessons I learned from her shaped my life, my attitudes and my parenting.

Val was born with a malformed arm. There was a slight kink at the elbow and then it stopped -- no forearm, no hand, no fingers. The arm stopped but Val certainly didn't.

Not only was Val in law school with me but she played baseball and squash and acted and participated in many extracurricular activities. It never occurred to her she couldn't. And she was right. She was cheery and upbeat and popular.

And she told me an important story. Once, when she was backpacking through Europe, she met a young boy with a similar condition, but with a very different attitude.

Whereas Val's parents had always told her how special she was and that she could do anything, this boy's parents had treated him like an invalid. They gave him compassion and pity but no motivation, no sense of what was possible -- since they didn't believe anything was -- and no vision. This young man was wasting away on his couch, deprived of physical activity, like some heroine in an old English novel.

It was an extremely painful experience for Val. And a lesson for us all.

Everyone has challenges and they need to be acknowledged. There are certainly many occasions where we need to feel and exhibit compassion towards our children (and ourselves!) But not pity. Not defeat.

A more matter of fact acceptance of our physical and emotional realities. And a greater vision and belief in our potential.

If we don't always have perspective on how this hurts us personally, perhaps we recognize how it harms our children, how it quite literally stunts their growth.

It also reflects a lack of trust and belief in the Almighty. He created us this way so we must be "just right." And He believes our potential is boundless, the possibilities infinite. He believes in us -- and He didn't make a mistake in His creation, right? We need to believe as deeply in ourselves and in our children.

When infants and toddlers fall (I'm talking minor bumps and bruises here), there is often a delay between the fall and the tears, the event and the reaction. In the interim a careful observer will see the child looking to his or her parents for a cue. If we look aghast and horrified, the child knows something is wrong and will burst into tears. If we are smiling and encouraging, our child will smile also and resume play. Their attitude and response is a mirror of ours.

We have the choice to lift our children up or bring them down, to encourage appropriate coping techniques or to given in to a sense of despair, to believe in their God-given abilities and opportunities or to discourage even trying. Among the myriad of gifts the Almighty has given me was that long ago friendship with Val. And a vision of what is possible.

Even The Food Channel

Unforgettable
Olivia Newton John’s Grandfather was a Nobel-Prize Winning Jewish Physicist
Don’t Believe in Other Gods Versus God is One
Seeing Without Eyes
Comments
MOST POPULAR IN Family
Our privacy policy
Aish.com Is Looking for Great Writers