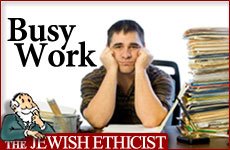 Sometimes "busy work" is in the eye of the beholder.

Q. Sometimes an employee has pretty much finished his inbox, but if I send him home early or let him lounge I'm afraid his work ethic will suffer together with that of other workers. So usually I invent some task I don't really need, but I feel kind of guilty.

A. There is no doubt that giving busy work is ethically problematic. The Torah warns us not to give an indentured servant "crushing labor:"

"If your brother becomes impoverished and is sold to you, do not work him like a slave. . . This is because I brought them out of Egypt, and they are My slaves. Don't work him with crushing labor, fear God" (Leviticus 25:39-43).

The expression is reminiscent of the "crushing labor" imposed on the Hebrew slaves in Egypt. (Exodus 1:13-14.)

Interestingly, the sages of the Talmud understood this commandment to refer not to very difficult labor, but rather to demeaning labor such as busy work:

And even though today there are no indentured servants, the ethical lesson is clear: Giving busy work can be demeaning and should be avoided. The great medieval explanation of the commandments, the Sefer HaChinukh (346), writes on this commandment that even though it is no longer binding, "it is proper for a person to heed this commandment even today, with the poor belonging to his household, and to take great care with it. And let him remember that wealth and poverty are a turning wheel in the world." (2)

However, your concerns about work ethic and morale are also echoed in our tradition. In the time of the mishna, it was the responsibility of the man to provide income while the wife's responsibility was to take care of household production. If the wife is wealthy and can hire servants (in the time of the mishna a dishwasher, clothes washer, etc. was a person, not a machine), then she is exempt from working herself, but the mishna states that she should not be completely idle because "idleness leads to license." Likewise, a husband may not forbid his wife to work, because "idleness leads to ennui". (3)

Here is another example: What happens if a day laborer is taken on but it then becomes clear that the employer erred and there is actually no work for him to do? If it will be impossible for the worker to find another job that day, the employer has to take responsibility and pay for the worker's missed day. But since the worker also benefits since he gets a day off, the pay is less than the usual pay for a day's work. But the Talmud makes an exception for "the residents of [the town of] Machoza, who if they are idle become weakened." (4) Evidently the men of Machoza engaged in specialized physical work, and their work was also their workout. If they were idle, they couldn't just go home; perhaps they would have to spend the day in the gym (or whatever the 7th century equivalent was) to maintain their condition.

The Talmud also tells us that if one person "borrows" another's idle servant, the borrower is exempt since the master is better off if the servant is not idling. (5)

So I generally write that what is improper is gratuitous busy work, busy work that doesn't serve any valid workplace goal. However, even when the assignment is justified for the above reasons, the extent and nature should be commensurate with these goals. If for instance the worker has a special reason to want to leave early, so that his early departure won't in this case affect workplace morale, then there is no justification for keeping him busy until closing just because in general that is better for morale. If the object is to keep him sharp, like the "residents of Machoza", then find a task which actually fulfills this objective. If the object is to keep his motivation high, try to find a task which he enjoys and finds challenging, even if the results may not be so critical -- for example, ask him to write up a business idea even if he is a lower-level employee.

Busy work can be demeaning and demoralizing, showing the worker that his time is worthless in the eyes of the employer. Yet idleness and early departures have their own corrosive effect on morale. To the extent employees have to be kept busy, tasks given to them should be tailored as closely as possible to their abilities and interests.

The Jewish Ethicist: Rat or Rap?
In the Shadow of David and Goliath
Where Do the Laws of Nature Come From?
Saadiah Gaon, Rashi and Maimonides: How Three Rabbis Revolutionized Judaism
Comments