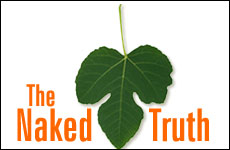 Is photographer Spencer Tunick serving the advancement of society?

I was getting out of my car a few weeks ago when I heard on the radio that celebrity photographer Spencer Tunick had beat a previous record. A few years ago he had captured 7,000 nudes on camera, and now he had beaten that record in Mexico City. Over 18,000 people came, took off their clothes, and stood around as he snapped away!

Why did this news strike me as not a cause for celebration and awe? After all, what is so wrong with the beauty of the human body? And why is Judaism so hung up on the idea of tzniyut (modesty) that demands we keep parts of our body covered? Didn't God give us our bodies, and if He gave us something beautiful, shouldn't we showcase it?

Generally, when we want to find the root of an idea, we look at the first time it is mentioned in the Torah. The first reference to clothing, or lack thereof, is in the Garden of Eden. Immediately after the creation of woman, the Torah states, "The two of them were naked, the man and his wife, and they were not ashamed" (Genesis 2:25).

The proximity of the creation of humanity and this declaration indicates a strong correlation between their essence and their nakedness.

Soon after, Adam and Eve sinned. And immediately the Torah tells us: "The eyes of both of them were opened, and they realized that they were naked. They sewed together fig leaves, and made for themselves loincloths" (Genesis 3:7-8).

Somehow, when the world went through the upheaval from a pre-sin world to a post-sin world, something changed that made them ashamed of their nakedness.

Our Sages explain that prior to sin, when the entire world was fulfilling God's wishes, the physicality of the world didn't hide God, but rather loudly proclaimed His existence. The human body didn't obscure the elevated soul inside, but was a shrine to that soul. When Adam looked at Eve, her body was like a translucent casing, showcasing the beautiful soul within. There was no reason to be ashamed of the body, and Adam and Eve felt no compunctions about being naked.

But with the primal sin, humanity showed that they favored the physical over God's word. This is underscored in the Torah's description of Eve's decision to eat from the tree: "And the woman perceived that the tree was good for eating and that it was a delight to the eyes" (Genesis 3:6).

After the sin, human perception of the physical world changed. It no longer solely reminded people of the reality of God; it had another side, something that hid reality and enticed as though it had a value of its own.

When this happened, Adam and Eve were ashamed of their naked bodies, because now their bodies hid their souls. Any onlooker would see only the physical shell, not the real essence of the human being that lay beneath the surface. Can there be any greater humiliation for a spiritual being than to be sized up as something totally physical?

This explains why animals never feel compelled to put on clothing. They don't have the divine souls that humans have. When you look at them you are seeing what they are, and therefore there is no reason for them to hide behind clothing.

The solution to their embarrassment, Adam and Eve discovered, was to cover themselves, so that someone looking at them would focus on the person, not the body. Indeed, the Hebrew word for clothing is levush, a contraction of the words lo bosh, meaning "not to be embarrassed."

One may think that Spencer Tunick's mass nudity is cute, just fun ‘n games. But look at his underlying message: these are only bodies, not people. He has no interest in them as humans, mothers, fathers, dreamers, givers, thinkers. It lessens our sense of humanity. It affects the souls of those who participate, and it affects the soul of society.

Our world has enough problems with people being objectified. We need to restore the view of every human created in the spiritual image of God. Tunick may have set a world record, but let's not make the mistake of calling that "progress."