Torah with Morrie #6: Feeling for Others 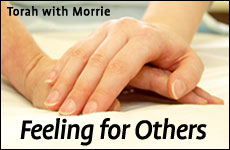 Striving to live with an awareness of the pain of others and do what we can to alleviate their burden.

One of the hardest challenges within the gamut of spiritual growth is to try to sincerely feel the pain of others. It is difficult to put ourselves in someone else's place and experience their hurting.

Morrie Schwartz didn't have this difficulty.

I (Mitch) noticed a stack of newspapers that had obviously been read before I got there. 'You bother keeping up with the news?' I asked.

'Yes,' Morrie said. 'Do you think that's strange? Do you think that because I'm dying, I shouldn't care what happens in this world?... Maybe you're right. Maybe I shouldn't care. After all, I won't be around to see how it all turns out. But it's hard to explain, Mitch. Now that I'm suffering, I feel closer to people who suffer than I ever did before. The other night, on TV, I saw people in Bosnia running across the street, getting fired upon, killed, innocent victims- and I just started to cry. I feel their anguish as if it were my own. I don't know any of these people. But -- how can I put this? -- I'm almost drawn to them. '

Amazing, I thought, I worked in the news business. I covered stories where people died. I interviewed grieving family members. I even went to their funerals. I never cried. Morrie, for the suffering of people half a world away, was weeping.

Quote from "Tuesdays with Morrie"

There's no question that when someone undergoes suffering of his own, he finds it easier to feel another person's pain. Such was the case with Morrie. But how can people who are not currently suffering accomplish the goal mentioned as one of the 48 ways to wisdom (Pirkei Avot 6:6), "sharing his friend's burden'?

We inescapably live much of our lives in a self-centered manner.

The reason why we find feeling other people's suffering so difficult is because we inescapably live much of our lives in a self-centered manner. We begin life as infants with no concept of anyone else but ourselves. Babies cry when they're hungry or when they have a dirty diaper without any perception that they are waking up their parents at 3AM. As we grow into childhood, we discover slowly that there are other people in the world and that we must get along with them. But we mainly 'share our toys' not because we care about the pain of other kids, but because we either want them to share their toys with us or because we're forced to.

As we develop and mature, we realize more and more that other people are truly important and need to be respected for their own existence. It is very hard to rip ourselves away from our self-absorption and it usually takes a lifetime of spiritual advancement to accomplish it.

This is why the great Talmudic sage Hillel told a potential Jewish convert, the Torah can be encapsulated into one directive: 'That which you hate, don't do unto others.' (Talmud Shabbat 31a)

Sensitivity for others, loving your friends and neighbors is what the entire Torah is all about. The goal of all of the 613 commandments is to break free from the self-serving and selfish attitude with which we are born, and to step into the thoughts and feelings of those around us, including God.

Now that we have discovered the source of the difficulty for feeling other people's pain, our self-absorption, we are ready to move forward and work on improving ourselves.

Let us learn from Moses.

By twists of fate, Moses did not grow up in slavery like the rest of the Jewish people. He actually was raised by Pharaoh's daughter, Batya, in the Egyptian ruler's palace. Yet, Batya, a secret convert to Judaism, informed Moses of his Jewish descent.

"He (Moses) went out to his brethren and saw their suffering."

Rashi: 'He placed his eyes and heart to feel pained for them.'
Exodus 2:11)

Moses went out of his way to feel the suffering of his fellow Jews. He did not sit back and enjoy his luxurious royal lifestyle. His brothers were hurting and he couldn't bear to live without feeling their pain.

Moses cried and said to himself: "I am so pained for them! I wish I could die for them! There is nothing as difficult as making bricks!' Moses then offered his own shoulders and helped as many Jews as he could with their work. (Medrash, Shemot Rabbah 1:27)

We need to strive to emulate Moses, to step away from dealing only with our concerns and start putting ourselves in the mindset of others. We need to see their needs, worries, and pain. We need to become good listeners, and offer comforting and encouraging words. We can't always do anything tangible to solve the problem, but the fact that my friend knows that I share the ache of his burdens helps him tremendously. He knows that he doesn't face his problems alone.

Included in sharing my friend's burden is the act of praying for him.

"Whoever can pray for another and doesn't is called a sinner…If he is a wise and sensitive man, he will make himself sick over his friend's problems."
(Talmud, Brachot 12b)

I know just such a wise and sensitive man. He is a prominent Baltimore rabbi and Torah scholar, Rabbi Yaakov Hopfer. He was once sitting at a meeting of a charity organization in Baltimore, in which the committee was discussing how to properly allocate funds and to whom. There were refreshments served. Several times throughout the meeting the host offered Rabbi Hopfer some food and drink. Rabbi Hopfer kept declining. The host started to wonder why the great rabbi was not eating his food.

Rabbi Hopfer explained his actions. "We are here discussing so many sad stories, so many people who need our help financially and otherwise. I feel that if I refrain from eating and I experience slight hunger as they do, I'll be better equipped to make decisions concerning these poverty stricken individuals."

This is what we must strive for. We should live each day with an awareness of the burden of others and do what we can to alleviate their pain.

Is Judaism Concerned with Conservation?

The Remarkable Jewish Impact on the World's Values

The Meaning of "Adam": Insights into the Hebrew Language
Korach 5782: Visit to Lift the Spirit
That Time The Ivy League Found A Way To Limit Jewish Enrollment
Would You Rather Be Right or Happy?
Comments
MOST POPULAR IN Spirituality
Our privacy policy