Living Together vs. Marriage 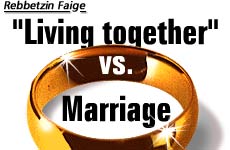 What does Judaism think of a man and woman living together before they are married? Does it make a difference if they are engaged to be married?

Partly motivated by the rising divorce rate, many young people think that "trying each other out" can help them avoid an unhappy marriage. However, studies have conclusively shown that "living together" does not increase the chances of marital success. Quite the contrary, the likelihood of a durable and lasting union is diminished by this arrangement.

Despite these facts, the myth continues.

The bottom line in living together is that there is no commitment.

Many young people come to counsel with my husband and I when they are considering marriage; among them are those who have adopted the currently unquestioned mode of living together. It has always struck us that the unspoken contract implicit in these relationships is: "I will allow you to use me as long as you allow me to use you. But as soon as either one of us finds someone we deem more suitable for ourselves we are out of here."

The bottom line is that there is no commitment. Living together -- with its informal, provisional, and tentative status -- lacks this key element which Judaism sees commitment as pivotal to a meaningful relationship.

While the institution of Jewish marriage in our day and age is no longer inviolate and indestructible or an absolute guarantee for an enduring union, the alternative is far more precarious.
Without a "forever" clause, living together is a relationship constantly subject to review and always in danger of not being renewed. I have witnessed time and again the terrible toll this takes on emotional and physical energy.

God created the first human being alone, and Adam was painfully aware of his aloneness. He was surrounded by subhuman species, all of whom had mates.

Prior to the creation of Eve, God paraded the whole spectrum of animals and their mates before him and Adam observed the interaction between them. God asked Adam if he too desired a mate such as he had observed amongst the subhuman species. Though terribly lonely, Adam declined, explaining that the manner in which the animals related, paired up and mated did not appeal to him. He observed that the process catered exclusively to physical impulses and appetites. He felt he needed a soulmate as a partner in life, someone who would not only meet his physical needs, but one who could relate to him on every level and with whom he could share his life's aspirations.

Adam felt he needed a partner for life -- a soulmate.

When God presented with Eve he exclaimed, "this is bone of my bone and flesh of my flesh." His reaction implied: "this indeed is the person I choose – one to whom I am able to commit and dedicate myself."

A close friend of ours is a prestigious attorney in family law practice. He has presided over countless divorces and has mediated many complicated marriage situations in his time. His policy has always been that he does not accept a divorce case unless the parties have already sought marriage-counseling intervention. His first question to couples in the initial interview is: "Have you worked on this marriage?" He says explains that there was a time when this was considered a valid question, but today it is greeted by uncomprehending expressions.

In our society, "work" when it comes to relationships, has almost become a dirty word along with other four-letter expletives. We operate under the illusion perpetrated by our culture that we will meet a "stranger across a crowded room" and then "live happily ever after." No pain, no sweat. The reality we must ultimately face is that every relationship requires hard work if it is to be maintained and sustained.

The Torah relates how Jacob worked seven years in service of the conniving Laban to earn the hand of his beloved Rachel in marriage:

And Jacob worked for Rachel seven years and they were in his eyes as but a few days because of his great love for her. (Genesis 29:20)

The conventional wisdom might assert that waiting seven years to consummate a relationship of love would seem like an eternity rather than "like a few days." A commentator suggests the explanation lies in the verse's words, "because of his great love for her."

The self-love, self-gratification or self-preoccupation that characterizes most current relationships did not drive Jacob's emotional commitment to Rachel. This was a love that was not compromised or tainted by ulterior motives and personal consideration. Jacob was willing to wait for Rachel since his total focus was on her beauty of person and the forthcoming privilege of sharing their lives together. In self-love every second is an eternity; in transcendent love years register as minutes.

A marriage ceremony, at the very outset, invokes expectations, accountability and devotion. The parameters are clearly articulated and defined. From a Jewish prospective, the promise of a commitment inherent in an engagement does not qualify for the physical privileges of marriage.

There are also transcendent and mystical values represented in a Jewish marriage ceremony. Traditionally, we wish the newlyweds that they should build a bayit neeman b'yisroel, "a faithful home in Israel." The two celebrants are individuals legitimately reaching for the joy and bliss that will hopefully await them in the years ahead. At the same time they are also part of a whole; they join and become a link in the ongoing remarkable chain of Jewish generations. In addition, by participating in the ceremony that hallowed the Jewish people for more than 3,300 years, they acknowledge that their efforts to create a home of love, caring, and cherishing each other cannot be done without the presence of God in their union.

In a Jewish marriage ceremony the union becomes a relationship sanctified by heaven.

The ceremony, replete with symbols of the profound wisdom of ages, acknowledges the necessity of a spiritual dimension in the creation of a home. As the couple sets out to shape an environment of love, caring, and sharing of mutual goals, objectives, and values they invite the Almighty to join them in their union as the third partner. It thus becomes a relationship sanctified by heaven.

On a mystical level, the union of a Jewish man and woman mirrors the relationship between God and Israel. That historic union was consummated with the giving of the Torah at Mount Sinai. Our sages, explain the symbolism of the mountain to the chuppah (wedding canopy), the Ten Commandments to the ketubah (the marriage contract), the "fire" of Sinai to the candles that accompany bride and groom down the aisle, etc. A traditional Jewish marriage joins and connects us both with our spouse here on earth and at the same time with the cosmic, supernal, and mystical realms beyond.

Jewish marriage is seen ideally as a holistic encounter, the coming together of body and no less significantly, of heart, soul, and spirit.

Living together without marriage bypasses the soul, as it does not invite Godliness into the relationship. Living together before marriage does not promote a commitment to hard work that must attend every choice we make in life if it is to be meaningful. It bypasses commitment and accountability, the very pillars of a relationship, and advances the narcissistic "use and discard, " "easy come, easy go," mentality of today's society.

Finally, from a Jewish perspective, living together before marriage reduces the relationship to a casual encounter. Marriage uplifts the joining of a man and a woman to a lofty and sacred place. In Judaism, the sacred and the casual are a contradiction in terms and do not co-exist.

One Drink Too Many: My Journey to Letting Go of Alcohol, Finding Freedom and Choosing Happiness
Take Two: Why Pesach Sheini is Significant to Our Family
Why Really Everyone Believes in Free Will
Who was Two-Gun Cohen?
Should Jews Support Ukraine?
The Jews of Cuba
Comments
MOST POPULAR IN Rebbetzin Feige
Our privacy policy