With His Dying Breath 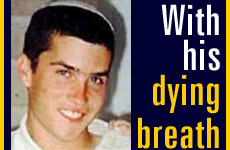 Noam Apter, age 23, died as a hero in the recent attack on the Jewish community of Otniel. His picture was on the front page of every Israeli newspaper. His bravery was reported on every Israeli newscast. His family's mourning and loss was the subject of conversation at dinner tables, office coolers, and essentially all over Israel.

Yet, the story of Noam Apter did not appear in the LA Times, or in most papers abroad. Not even his name was mentioned. Nor his age. Nor the names or ages of the other three victims brutally murdered in the Sabbath eve massacre at Otniel. He was just another one of "four Israelis killed in the West Bank."

Since you probably missed it, here is the story:

On Friday night, December 27, over a hundred Israeli teenagers and young adults sat down for the Sabbath meal at the yeshiva of Otniel. Four of the students whose turn it was to be the evening's "waiters" went to serve the main course in the kitchen adjoining the dining room. Noam Apter was among them. The other three waiters were: Yehuda Bamberger, 20, Zvi Ziman, 18, and Gabriel Hoter, 17.

He closed the door, locked it, threw the key into a corner -- then collapsed and died.

Suddenly two terrorists dressed in Israeli army uniforms burst into the kitchen and sprayed the four waiters with fire from their M16's. Hit by the bullets and mortally wounded, Noam used his last strength to run to the door connecting the kitchen and the dining room. He closed it, locked it, and threw the key into a corner. He then collapsed and died, lying against the door.

The terrorists tried to open the door. Seeing it locked, they sprayed gunfire through a small glass window into the dining room. After realizing that this fire was inaccurate and wild (it wounded six more students) and having already killed the four student waiters, the terrorists fled the kitchen, later to be hunted down and killed by the Israeli army.

Yaacov Ohana, an 18-year-old wounded survivor of the attack, told Ma'ariv: "Our great luck was that Noam succeeded in locking the door to the dining room and throwing the key into a dark corner. Otherwise the terrorists would have massacred dozens".

To illustrate how one-sided the world media coverage has been, one needs to go no farther than the LA Times. During the four days after Noam's death, the LA Times published seven major articles on the conflict between Israel and the Palestinians -- a total of over 7,000 words. Yet no room could be found for Noam's name or his story of bravery, nor for the story of his family's loss.

While not a single name of an Israeli victim was listed, the LA Times listed 17 Palestinians "victims” by name.

By contrast, stories about Palestinians, their names and ages filled these seven LA Times articles over those four days. While not a single name of an Israeli victim was listed, nor the age of a single Israeli victim, the LA Times did find the room to list by name 17 Palestinians "victims" (some of whom were terrorists killed in gun battles with Israeli troops), and the ages of a total of 20 different Palestinian "victims.”

Lack of ages and names are only the beginning. Each Palestinian "victim" has a story, heart-rending, full of context, detail, local color, and moving quotes. The Israeli victims are just statistics, without quotes, without a context, essentially without a story. This lack of balance might be explained if the numbers were unbalanced -- so many more Palestinians dying than Israelis. Yet on December 29, the Times itself reports that in the month of October, more Israeli civilians were killed (45) then Palestinians (41).

So why no names, no ages, no stories for the Israeli victims? Why don't the Israeli unarmed civilians who are deliberately targeted by terrorists get at least the same consideration as the Palestinian civilians who are tragically and mistakenly killed in a tough war against terror that Israel must fight in populated areas?

One is left with the unmistakable conclusion that for the LA Times, Palestinian suffering and Jewish suffering operate by different standards.

Jonathan Medved is a venture capitalist and the CEO of Vringo. He lives with his wife and children in Jerusalem.

BBC At It Again

Fork in the Road Map