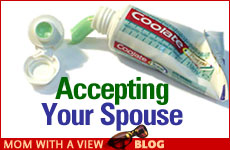 Part of the challenge of marriage is the constant need to remind ourselves why we married our partner in the first place.

All around me I see doomed relationships because the husband or the wife wishes their mate to be someone or something they're not. While it is certainly true that people sometimes marry their partner hoping he or she will change (despite all the marriage books, classes and videos to the contrary!), this is not always the problem.

It may also be true that people have very active fantasy lives (witness the large sales of Harlequin romances and authors like Nora Roberts and Danielle Steele), that they get caught up in dreams and fairy tale imaginings and lose sight of (and gratitude for) their reality. But this is not always the problem either.

In wanting our partner to be different, someone new, we frequently forget why we married them. We married them for who they are, for that particular combination of character traits that is ly them. It's a package deal. Remove one of those qualities and you don't have an improved wife, you have a different wife. Your husband is not a better person, he is someone else entirely.

Part of the challenge of marriage is the constant need to remind ourselves why we married our partner, to refocus ourselves on the qualities that attracted us to them, and to tell ourselves that, as with our children, we can perhaps do some fine tuning but we can not change their basic character. Nor do we really want to.

If we are loud and boisterous and we were attracted to our husband for his sense of calm and quiet, we can't now complain that he doesn't like to go out more often or throw large parties. Instead we need to focus on the beneficial effect that his peaceful nature has on our wilder one, on the ways in which we grow under his steady influence.

It is in these areas of difference that there is usually the most attraction, the most struggles, and the most opportunity for growth.

My friend Shira is a real cheerleader type. She loves to belong and to inspire others with her team spirit. After they got married, her husband began work with a national teenage youth group. Shira loved it. She loved mothering all the kids and having them over for Shabbos. She loved the conventions and retreats and the sense of being part of a group of like-minded idealists. But Shira's husband was more of an independent thinker. He chafed under the rules and regulations of a bureaucratic organization. He needed greater personal and intellectual freedom. He needed a new job.

It was hard for Shira to leave this group, and things in her marriage could have turned ugly. But Shira was able to remind herself that she valued her husband's independence and critical thinking, that being a "rah rah" camper her whole life, she was stimulated and excited by his original thought and action. By focusing on these areas of initial (and ongoing) attraction, Shira was able to support her husband through his time of transition instead of attacking him. While she may have wished her husband to also be the camp counselor type, she recognized that it was so inconsistent with his personality that he'd need to be a completely different person. He wasn't capable of that, and she didn't really want that either.

Dan took pleasure in his wife's free-wheeling ways... until dinner didn't appear on the table.

If only we were all so mature and far-sighted.

In my cousin Dan's marriage, they have a somewhat opposite and potentially contentious dynamic. Dan was attracted to his wife, Sara, partly because she was so vivacious and fun loving. She enjoyed spontaneity and was full of vision and dreams. Dan who was more of a quiet planner took pleasure in her free-wheeling ways. Until dinner didn't appear on the table. Or appeared at odd hours.

While they have to find a practical solution to the meal issue (a guy has to eat), Dan had to give himself a little talking to. He reminded himself that he really loved that side of Sara. Her warm personality attracted others to her and she was so easy to be around. How lucky he is. Despite his growling stomach, Dan knew that he had been drawn to those qualities so he wasn't really in a position to complain. Yes they had some things to work out, but that sense of fun would always be part of Sara's essence, and if Dan is smart, he will continue to enjoy it.

Every time we read our lists, it should bring a smile to our faces as we realize how lucky we really are -- we got exactly what we wanted.

You Give, You Will Care

Let It All Hang Out
G-d Time
Shavuot is The Holiday of Cheesecake and Blintzes
What Does Kosher Mean Literally?
Comments
MOST POPULAR IN Mom with a View
Our privacy policy