The Jewish Ethicist - The Snitching Supervisor 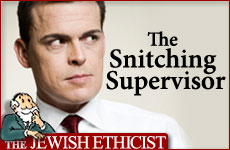 Discussing the shortcomings of your workers.

Q. As a supervisor in my workplace, I often have to discuss workers' performance with other managers. If I discuss their shortcomings, am I guilty of slander?

A. Jewish tradition places a particular emphasis on careful speech and avoiding harming others or hurting their feelings through malicious or even careless speech. The prohibition of harmful speech has its source in the following verse (Leviticus 19:16): "Don't go about as a talebearer among your people; don't stand idly be the blood of your neighbor."

What is the connection between the two halves of the verse – "don't go about as a talebearer" and "don't stand idly by the blood of your brother"? We find two complementary approaches in the commentators.

Maimonides writes that "This is a grave transgression and causes the deaths of many souls of Israel; therefore it is adjacent to 'don't stand idly by the blood of your brother'". (1) According to this explanation, the two halves of the verse reinforce each other; I avoid "the blood of my neighbor" precisely by refraining from spreading gossip, which leads ultimately to enmity and bloodshed.

The Medieval commentary on the commandments, Sefer HaChinukh, takes a different approach. He writes that a person shouldn't say damaging things about others – unless the intention is to prevent damage or quiet a dispute. (2) The two halves contrast and balance – we shouldn't relate idle gossip, but we shouldn't refrain from speaking when silence would be culpable negligence toward a potential victim.

This approach was given precise boundaries by one of the great rabbinical authorities of the late 19th and early 20th centuries, Rabbi Yisrael Meir Kagan of Radin, Poland. Rabbi Kagan was a renowned legal authority as well as revered for his saintly conduct; he decided that he would compose a strictly reasoned legal work defining the boundaries of this prohibition and providing binding rulings. He concluded that it is permissible to relate a damaging statement when the following conditions are fulfilled:

1. The main condition is that the statement is intended to achieve some concrete benefit. Making damaging statements is permissible only when it is needed and intended to protect someone.

2. In addition, disclosure must be necessary to attain the benefit. If the same benefit can be obtained without disclosure, for example by a talk with the wrongdoer, then there is no justification for disclosing the information.

3. You are certain of the truth of the information you relay. Stating hearsay is the essence of gossip. The information must also be related accurately, without judgment or exaggeration.

4. You must also be convinced of the negative implications. We have a general obligation to judge others favorably, we shouldn't be in a rush to spread negative information to others if we ourselves aren't convinced that it implies any potential harm to the listener.

5. There must be no undeserved damage to the subject. We will discuss this in detail in upcoming lessons, but for example a person may have misbehaved at work and deserve a report but not dismissal; a person may have acted improperly towards a neighbor and deserve a fine but not arrest. If reporting will cause undeserved damage it is impermissible. (3)

These rules apply equally to a supervisor or a co-worker, but their application is quite different. If you notice some minor deficiency in the performance of a co-worker, it will be generally be the exception that reporting it will lead to some concrete benefit. Will management really listen to you? Do they have regard for your objectivity and judgment? Is this really new information that supervisors are not aware of? So for the average observer, reporting is the exception, reserve the rule.

But if you are a supervisor, it is the essence of your job to evaluate and report on workers' performance. It is most likely that your reports are needed for some concrete benefit; otherwise you wouldn't be getting a salary to make them. For the supervisor, reporting is the rule, reserve the exception.

When despite this should even supervisors keep quiet? If management wants you to report on matters that are not really of relevance to job performance (for example, political opinions) or to report in an inequitable way (for example, to actively seek "dirt" on a particular employee), it is appropriate for you to seek clarification of the policy and the justification for it. If you are convinced the policy is unjustified and counterproductive you may have to occasionally ignore it.

Worker oversight is certainly necessary and appropriate; the Talmud tells us that someone who has inherited a lot of money and wants to lose it fast should hire workers and not supervise them. (4) However, this doesn't justify transmitting unfairly damaging information about them. In most cases, the kind of information supervisors have to pass on is necessary for a constructive purpose, but supervisors should keep alert for exceptional cases where the information is improperly used, and request a clarification of inappropriate policies.