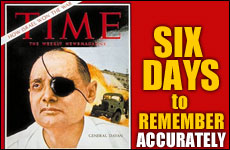 With the 40th anniversary of Israel's astonishing victory in the Six Day War has come a gusher of revisionist history, most of it suffused with sympathy for the Palestinians, disapproval of Israel, and indignation at the ongoing "occupation" that is said to be at the heart of the Middle East's turmoil.

On the BBC website, for example, Middle East editor Jeremy Bowen's retrospective on the war -- "How 1967 defined the Middle East" -- begins by noting that "it took only six days for Israel to smash the armed forces of Egypt, Jordan, and Syria." It goes on to emphasize that "the Israeli Air Force destroyed the Egyptian air force on the ground on the morning of 5 June 1967 in a surprise attack."

But the BBC makes no reference to anything the Arabs might have done to provoke Israel's attack, other than broadcasting "bloodcurdling threats" on the radio. The vast buildup of Arab armies along Israel's border, the expulsion of UN peacekeepers from the Sinai Peninsula by Egyptian ruler Gamal Abdel Nasser, the illegal closing of the Straits of Tiran, which cut Israel off from its main supply of oil -- the BBC mentions none of it.

Instead, Bowen claims that Israel's "hugely self-confident" generals couldn't wait to go to war because they knew they couldn't lose. (In reality, Israel's military and political leaders were deeply anxious; so severe was the stress that Yitzhak Rabin, the chief of staff, suffered a nervous breakdown.) "The myth of the 1967 Middle East war," declares Bowen, turning history on its head, "was that the Israeli David slew the Arab Goliath."

The BBC's account, unfortunately, is not . In the revisionist narrative, what is most important about 1967 is not that Israel survived what its enemies had intended to be a war of annihilation, but that in the course of doing so it occupied Arab land, some of which it still holds. "End the Occupation" is the theme of countless anti-Israel rallies around the world this weekend. The UN secretary general issued a statement remembering the victims of Middle East conflict, "particularly the Palestinians who continue to live under an occupation that has lasted 40 years." A two-page "message" from the United Church of Christ repeatedly deplores Israel's occupation: It uses some form of the word "occupy" 15 times, but doesn't mention even once the decades of Arab terrorism that have sent so many Israelis to early graves.

Considering how often the "occupation" is identified as the chief impediment to Arab-Israeli peace, you might expect 40th-anniversary discussions of the war to grapple with the fact that there was no occupation in 1967, when the Arabs were massing for war on Israel's borders. But that would mean acknowledging that Arab hatred and violence caused the occupation -- not, as current fashion has it, the other way around.

Israelis in 1967 didn't doubt that Cairo, Baghdad, and Damascus meant exactly what they said. Neither did Time.

And so Time magazine's anniversary story on the Six Day War is relayed entirely from the perspective of a Palestinian who has lived all his life under occupation on the West Bank. Nowhere does the 2,500-word story pause to note that there would never have been a West Bank occupation if King Hussein of Jordan had heeded Israel's public and private pleas to stay out of the fighting. Instead, Hussein shelled Tel Aviv and Jerusalem and sent warplanes to bomb Netanya. Radio Amman announced
in the king's name that all Israelis should be "torn to bits." Only then did Israel, fighting in self-defense, enter the West Bank.

Forty years ago, Time was not confused about where the sympathies of civilized people should lie. Reporting on the war in its issue of June 16, 1967, Time spotlighted Nasser's bellicose threats and noted "the Arab forces ominously gathering around the Jewish homeland." It explained to its readers in straightforward language that "ever since Israel was created 19 years ago, the Arabs have been lusting for the day when they could destroy it." (One week earlier, Time's cover had been bannered: "Israel: The Struggle to Survive.") It put Israel's alarm in the context of "a hostile Arab population of 110 million menacing their own of 2.7 million."

And it quoted the Arabs in their own words:

"'Our people have been waiting 20 years for this battle,' roared Cairo. 'Now they will teach Israel the lesson of death!' . . . 'Kill the Jews!' screamed Radio Baghdad. A Syrian commander offered the rash prediction to radio listeners that 'we will destroy Israel in four days.' "

Israelis in 1967 didn't doubt that Cairo, Baghdad, and Damascus meant exactly what they said. Neither did Time. Four decades later the narrative has changed, but the facts, stubbornly, are what they are.

It is a fact that if Israel had lost the Six Day War, there would have been no occupation these past 40 years.

It is also a fact that there would have been no Israel.

The Only Way to Peace

Destroying History
Should I Break Up, Get Engaged or Keep Dating?
Time Is Your Precious Commodity
A Constant World in Flux
Comments
MOST POPULAR IN Israel
Our privacy policy