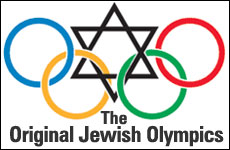 No, I'm talking about the original Jewish Olympics. Never heard of ‘em? Neither did I until my great-grandmother Rivka clued me in. I started researching it and what I found was so illuminating that I decided to write a book. I'm proud to let you know that my book has been accepted for publication by Manishevitz Publishing. So here's an excerpt from the "Complete History of the Original Jewish Olympics."

Two Jewish cavemen, Ogstein and Zubowitz, can't stop fighting for the affections of the lovely Moogberg. The mischievous Moogberg, sensing her power over them, suggests a competition: The first one to run a mile to the dinosaur watering hole and run back to her with a dinosaur tooth will win the right to have her as his girlfriend. The good news for Zubowitz is that he's a faster runner and so gets to the watering hole first. The even better news for Ogstein is that in the process of attempting to extract the tooth, Zubowitz is killed and eaten by the dinosaur. For their first date, Ogstein and Moogberg roast small, slow, overweight, easy-to-catch dinosaur chunks over a romantic fire singing "Ogstein, Row the Boat Ashore." This same event is repeated annually for the next 20 years as new suitors continue challenging Ogstein for the right to date Moogberg.

The first Olympics games started by the Greeks was in 776 B.C.E. Were they inspired by the actions of the Jews a year earlier? Judge for yourself. This time it was two hill-dwelling women, Shirleyavros and Maxineastotle, who provided the inspiration. As they walked down the narrow, winding road to the market, they were disturbed to find cows and oxen asleep in the middle of the road, blocking their path. What to do? Shirleyavros jumped over one and challenged Maxineastotle to do the same, which she did. Before long, the two friends were jumping over increasingly larger beasts of burden, from greater distances away and even placing bets on their jumps. Now you know why today's hurdles are referred to as "oxen." OK, they aren't really called oxen, but think how flattered Shirleyavros and Maxineastotle would be if they were.

Jews lived in Asia Minor for 2,400 years, where Turkey proved to be a safe haven for them. It was there that Jews flourished and contributed to the Ottoman Empire when upholsterer Otto Shmuelowitz, lacking enough fabric and wood to create a full sofa, inadvertently invented the Ottoman, a low-cushioned seat without backs or arms. Within two years, Otto's cousins, Sippy and Bobo Shmuelowitz, aspiring athletes, came up with the idea of stacking ten Ottomans on top of one another and having a tall Polish man fling Bobo over the top of the Ottomans. Despite Bobo suffering a concussion during one such workout, the "Pole-Vaulting" caught on like wildfire and before long, every major Turkish city had its own Olympics featuring the more politically correct "pole" vaulting. Descendants of the Shmuelowitz's today receive a percentage of sales for every ottoman and pole on the market.

Descendants of the Shmuelowitz's today receive a percentage of sales for every ottoman and pole on the market.

The contribution of Jews to the life and culture of the American Wild West has been well documented, but for our purposes here we will focus on two brothers, Mordechai and Yitzchak Earpstein (no relation to Wyatt). They were gold prospectors who theorized that the largest mother lode of the precious substance would most likely be found, not in the streams where their fellow prospectors were panning for it, nor in the mines, but rather up in the mountains themselves. Moderately successful exploring their theory, the brothers' connection to the Olympics comes into play with their method of getting their gold and themselves down the mountain. A series of connecting troughs wide enough to carry gold and humans quickly down – is now acknowledged as the inspiration for today's Olympic sport, luge. As a side note, Mordechai Earp years later originated the idea for combining lox, eggs and onions, which is why you can find it on some deli menus as the Mordechai Special.

All right, I know what you're thinking – "Mark, what with your obsession with finding the perfect cherry cheese blintz, how were you even able to find the time and focus to write a book like this?" Multi-tasking. But the other thing you're thinking is – "Mark, we thought this was supposed to be about the Original Jewish Olympics. All we see here is a selection of various Judaic Olympic events throughout history." Hey, the Jews kept getting kicked out of one country after another, so they had to take their Olympics with them. That's right, they were portable Olympics.

Finally, when you consider the obstacles and challenges the Jewish people have faced throughout history, and how we have triumphed and contributed to society, is it not fair to say that each of us Jews carries an Olympic flame in our heart and soul? Or it could be heartburn. Either way, we have much to be proud of. Next year in Jerusalem. Or better yet, 2012 in Jerusalem.

The (Jewish) Show Must Go On!

Spare Time!?
It Takes A Lot Of Faith To Be An Atheist
How Instagram Brought Back This Nostalgic Soup
What Makes Eli Run?
Comments