The Bomb in the Bag 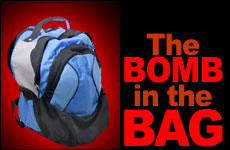 It wasn't really a bomb, don't worry. You are safe. We were safe. Then we laughed.

It wasn't really a bomb, don't worry. You are safe. We were safe. Then we laughed.

I'd almost gotten to the front of the line, thinking about what to make the children for lunch, when I realized that the man behind the counter at the Postal Bank Section was calling out, "Shel mi zeh hasakit?"

Whose bag is that?

The question echoed down an empty corridor in my mind, I've heard it many times before. Whose bag is that? In other words, the owner of that bag must now appear and claim it and take it away so we can be restored to whatever it is we have to do right now. But no one stepped forth. Therefore, someone must have forgotten his bag, and that person will come running back to the Post Office.

My eyes were traveling to the people in line behind me, and entered into the gaze of 1) a bearded priest with a floor-length black robe and one of those tasseled, oval black hats, 2) a young woman with blonde hair straight to her shoulder, maybe a Scandinavian tourist, 3) six or seven Israelis, of whom I now have no memory, 4) a sixtyish woman with a grey ponytail, in beige slacks and low heels, whom I remember only because it was she who laughed, and 5) a young Arab woman a few places before me in line; she'd just stepped up to the counter.

I thought she was Arab. She could be Israeli. She is carrying a bag from an Israeli store. So she's probably Israeli. Looking at me out of the corner of her eye: she looks like an Arab. She's an Arab. She's dressed in modern clothes, pants, eye makeup; not Islamic, not Gaza, not jihad...but she is glancing over at me. As scared as the rest of us. To be caught here with the Jews! She's darting her eyes at me. I'm staring at her. So, she sees what it's like, to be a Jew with us! Vulnerable to the heedless, remarkable cruelty of her own people!

She could be an Israeli.

If we run, that means it is true, it is a bomb, and we are probably going to die, so we are standing still.

"Shel mi zeh hasakit!" It's not a question this time, it's a demand. The man is calling out more loudly. The culprit, the bag, I see it now, over there on the other counter under the windows, where people who were a moment ago licking stamps and addressing their envelopes are now looking around dumbly with half-open mouths, searching for an answer, waiting in the exceedingly thick silence before the deafening explosion, standing here mutely like sheep dwarfed by our fate. If we run, that means it's true, it is a bomb, and we are probably going to die, so we are standing still. Why are we not making a run for it? Why do we stand here as if frozen in a dream? Because someone must now come forth to claim it, but no one's coming forth.

It's a white plastic bag. Something's inside it. Some bump underneath the shiny white plastic. My eyes are without shyness or self-consciousness resting in the young priest's brown eyes, searching in the blond tourist's blue eyes, then back into the eyes of the woman sitting behind the counter. We're together here, strangely shorn of strength, in this oddly hushed, still tunnel of non-action, all looking into each other's helplessly tender, questioning eyes, and we're waiting for 1) the bag's owner to step forth, which he must do, because if he does not then 2) we are going to die. We're all seeing the newspaper pictures of bombed buses, thinking of the heads and limbs blown out bus windows and found later upon the street. We all feel quite pleasantly at one with each other in this poignant moment, I and you and you and you and you and you.

Ah, but all at once the woman with the grey ponytail has awakened, to rescue us. "O! Zeh sheli!" she cries out from her place in line, taken by surprise, for she had been as scared of the enemy as anyone else. "It's mine!" She's startled, singing out in harmonic counterpoint to the man behind the counter.

A roll of laughter moves eagerly through the post office like a thunder cloud abruptly unburdening itself. "Zeh sheli! Zeh sheli!" She's laughing and we're smiling, the priest, the tourist, the Israelis. The Arab woman who may be a Jew has resumed her transaction at the counter. Laugh it up! What a joke! We want to laugh! The tunnel's already melted to nothingness; dismembered bodies have disappeared. We're eager to forgive, but what took her so long? What happened, lady? Under the spell along with the rest of us? Did you freeze like Sleeping Beauty, and now all the people in the kingdom are waking up after the forced enchantment? What a long sleep we had in that quiet tunnel; it must have taken all of 60 seconds until you woke up. "It's my bag! It's my bag!" she keeps calling out with an abashed, ashamed grin. We have met the enemy, and he is us. So she scurries over on her stylish little heels to fetch her bag, her bad, bad bag.

Aren't we mad at her for scaring us like that, for sending us carelessly to the edge and giggling, calling us back again? Oh, perhaps, but never mind. "Sheli, sheli," the woman behind the counter at Stamps is joking to her colleague, the next chair over at Postal Bank. It's mine, it's mine. "Sheli, shel mi," he guffaws. It's mine, it's whose? "Zeh sheli, shelah." It's mine, it's yours. That proves it; we really are in the Jewish State. They sound like that passage from Ethics of the Fathers: Who is the wicked man? He who says: What's mine is mine and what's yours is mine. And who is the saint? He who says: What's mine is yours and what's yours is yours.

The woman behind the counter, still laughing, still muttering, weighs my letter to Los Angeles. I tell her I want ten aerograms and ten envelopes with local postage prepaid. Then I walk out, trembling, into the spring sunshine, with a straining, a weakness, and a yearning in my heart, and an unutterable gladness, this time, to have been released.

An excerpt from Sarah Shapiro's book, "Don't You Know It's a Perfect World" (Targum/Feldheim)

A Light in the Darkness
Chukat 5782: Let’s Play the Blame Game!
The Sin of Moses: The Two Ways to Communicate
In Aftermath of Chicago’s July 4th Shooting, Local Moms Provide Countless Points of Light
Comments
MOST POPULAR IN Israel
Our privacy policy