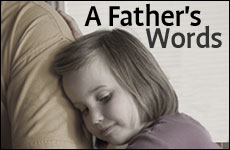 She had always believed that one day he would sit her down and tell her how much she meant to him. But that day never came.

It felt as if this pregnancy would never end. Shira was already two weeks overdue and each added day was a trial, especially since this was the hottest summer New York had seen in years.

When the pains started, at long last, she welcomed them.

As Shira and her husband hurried to Mount Sinai Hospital, she felt a growing sense of dread. No, it wasn't anxiety over the coming birth; it was, rather, the memory of her father's final illness. This was the first time she was returning to the hospital since he had died there five months earlier.

He had no trouble showing his irritation and anger, showing his love was much more difficult.

Shira knew that her father had loved her and her two sisters. She knew he was extremely proud of them. She saw it sometimes on his face. She heard it often from her mother. But though he had no trouble showing his irritation and anger, showing his love was much more difficult. How was it that in her father's eyes she was so precious, yet he was never able to meet her eyes and tell it to her directly?

She thought back to her first visit to the hospital. Her father had developed a sudden infection, which quickly traveled to his heart and lungs. The family was totally unprepared and it was a frightening time for them all. Shira had never felt comfortable in her father's presence. Even at this time, as a grown woman, she was unsure of how to approach him.

Shira made her way up the elevator to the cardiac ward and peeked into rooms until she found him. There he was, in his bed, looking suddenly old and frail, yet she felt like a young child in his presence, and to her he loomed large...

Still, Shira wanted to connect. She wanted to share herself with him and bring him into her reality. She told him how the kids were doing and the funny things they said. He smiled but made no comment, and she felt she was chattering on aimlessly. She tried to tell him how she was managing during her early months of pregnancy, but women's topics made him uneasy. So, as in the past, her father fell back on expounding his latest political views. His ideas were always novel and well thought-out but Shira had never cared for politics. She was always waiting for something else. Something more.

Her father was eager to explain his newest theory, but he had to stop often to struggle for breath. Hearing the creak of wheels behind her, Shira turned to see the supper trays being delivered. His cart was brought close and he strained to sit up straighter. Still, the tray was much too high for him. "Here," he said hoarsely, "lower it for me..."

Grabbing both sides of the cart, Shira tried to lower it on its metal shaft. There was a steaming bowl of soup that had been filled to the brim and she was afraid her sudden movements would cause it to spill. All at once she began to tremble. She sensed her father's impatience, real or imagined. A fear of failure decades old overtook her as she pictured herself splashing his soup onto the plate. Tears welled up in her eyes and she hurried out into the corridor. There she spotted a candy striper and begged her to come help. With a quick flip of her hands, the young girl expertly lowered the tray and set it in place right beneath the old man's chin.

With her father on his deathbed, she still could not bridge the gap of unspoken words that hung between them.

That day Shira went home physically drained and emotionally spent. She could not even speak a word to her husband. All she could do was sit on the couch and sob. It was not only the shock of seeing her strong father so ill; it was the realization that after all these years she still could not bridge the gap of unspoken words that hung between them.

As the weeks went by her father worsened steadily. Shira had always believed that one day he would sit her down and tell her how much she meant to him. How he loved her, how proud he was of everything she did and everything she was, how he wished he had said these words when she was younger. When he was younger. She had always waited for the day when he could quietly hold her hand. But that day never came.

Sudden breathing problems... sedation... being put on a respirator... the tube detaching... clinical death... resuscitation and the resulting damage... For the remaining weeks of his life, her father would look at her through a sedated haze, unable to speak, motioning aimlessly with his hands. She never knew what he was thinking, though she could see the pain, the fear, and the suffering in his eyes. And then it was over. No sudden revelations. No final opening of the heart.

After the funeral, Shira and her sisters returned to their mother's home. They left their children in the care of their husbands, and for the seven days of mourning were little girls again. They talked endlessly about their childhood, with their mom revealing new sides to old stories. They cried, they hugged, and sometimes, when there was a break in the stream of visitors who came to give comfort, they were even able to laugh.

And then the irony of it hit her and plunged her deeper into confusion. For she realized that though it was the death of her father that had brought them all back home, they could never have felt so relaxed and free together if he were there with them, still alive. After the shivah, Shira returned to her family, but she found herself overcome with grief. Grief for what she had lost and grief for what she had never had.

Now she was back at the hospital to give birth to new life, but it was with thoughts of death and dying that she made her way down the corridor. By a strange twist of fate, her younger sister was there, too. She had given birth to a baby boy just the day before.

Shira hurried into the delivery room and before the night was over she held a beautiful little girl in her arms. The next morning the smiling nurses moved her into her sister's room.

At last their mother had a happy reason to come to the hospital. Holding her two newest grandchildren in her arms did much to heal the open wound that had remained with her from the time of her husband's illness. Now she would be able to pass the hospital without feeling herself pulled back to that awful time of helplessness.

Her mother gave kisses, snapped pictures, and then, as Shira and her sister nursed the new cousins, she took an envelope out of her purse. It was a letter their father had written years back, and their mother had just found it as she was going through his papers.

"'I have always wondered if anything I have ever done has made a difference'," she read his words. "'I've tried to do whatever I could for the Jewish people, but have I really made a lasting contribution? When looking over my life I think of the old rabbi who said, "When I was a young man I wanted to change the world. When I got older I thought I would at least be able to affect my own country. When I got older still I realized it would be an accomplishment to teach something to my little town, alone. After a few more years I was content to try to influence my family. But then, when I was very, very old, I realized that my life would be worthwhile if I could just improve myself."

"'Throughout the years, I tried to change the world for the better. I stood at street corners holding placards to protest injustice. I wrote scathing letters to the editor. I debated the most vital issues of the day with friends and neighbors. I thought my work for Soviet Jewry and Israel's defense was the purpose of my life, striving to build a better future for my people. But I was wrong.

"My contribution to this world is my three daughters."

"'My contribution to this world is my three daughters, future mothers of our nation. My sole ambition is to help them and guide them. And this I can only do by making sure I live a life of integrity and principle myself'."

Her mother stopped reading as tears ran down her face. Shira looked over at her nephew who would soon be named for her father, and pressed her own daughter close to her heart. She struggled to integrate the thoughtful and sincere writer of this letter with the man she had been so afraid of all the years.

Could it be that when her father let loose with his temper he felt powerful and strong, while to behave in a loving and warm manner was seen as weakness? Did he feel that openly acknowledging his feelings for his daughters would make him vulnerable and less manly? How could it be that he would harm the very ones he cherished with outbursts triggered by the slightest irritation?

Excerpted with permission from "HEARTBEATS," edited by Shoshana Lepon. Published by Targum Press.

The 75-Year-Old Bottle of Wine from Poland

My Mother, My Self
Is Grease the Word?
Dried Fruit Compote
Scientific Curiosity and the Divine Encounter
Comments
MOST POPULAR IN Family
Our privacy policy
Aish.com Is Looking for Great Writers