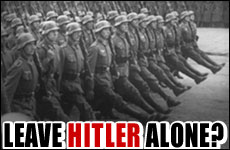 Rethinking America's 'good war' is a not so subtle attack on our current struggles.

The lyric from the old pop song that proclaimed "Don't Know Much About
History," is a label that could well be applied to many Americans.

But despite the fact that surveys occasionally tell us that many
college seniors place the Battle of Gettysburg as happening sometime in
the middle of World War II, the study of history isn't merely for those
hobbyists who like to pose as Civil War or Revolutionary era soldiers.

Even as we debate the largely unpopular wars being fought with
Islamists in Iraq and Afghanistan, the focus of another crucial debate
currently raging on the bookshelves and television screens is one over
the merits of something that most of us had long thought was not
debatable: the wisdom of the American involvement in World War II.

The notion that there is any debate at all about the war the United
States fought against the German Nazis and the Japanese imperialists
seems absurd. Surely, no reasonable person could dispute the necessity
of defeating Hitler. But an argument there is, and it is one that is
gaining momentum.

In recent months, two works questioning the justice of the fight
against Nazi Germany have vaulted onto The New York Times bestseller
list: Human Smoke by Nicholson Baker and Churchill, Hitler and the
Unnecessary War by Patrick Buchanan.

Baker is a quirky novelist who has penned books about a wide variety of
subjects including voyeurism and a fictional attempted assassination of
President George W. Bush. Buchanan is the longtime far-right pundit and
television personality, and one-time independent candidate for
president, whose views were once rightly labeled as anti-Semitic by the
late William F. Buckley.

Their books are as different as the authors.

Both take the point of view that, while Adolf Hitler was a bad guy, he
was provoked into launching a world war that he had not planned on.

Baker's effort is the effort of a more accomplished prose writer
(despite its fictionalized conversations involving world leaders it is
sold as a work of nonfiction), while the former GOP stalwart Buchanan
retains the punchy style of a former political speechwriter. But they
are aiming at the same target.

Both take the point of view that, while Adolf Hitler was a bad guy, he
was provoked into launching a world war that he had not planned on.
Instead of heaping blame on the Nazi monsters who launched the war and
carried out unprecedented war crimes as well as the cold-blooded murder
of 6 million Jews, each see Winston Churchill as the real villain of
the war. Had Hitler been left alone, they both assert, the Holocaust
would not have happened and that the world would be a saner place today.

Though Baker's concludes his faux narrative at the end of 1941, he
clearly sees the Allies tactics in fighting the war as indistinguishable from that of the Germans. In his brief afterward, he dedicates his book to the tiny band of American and British pacifists who did everything they could to prevent their countries from resisting Hitler.

The theme of Allied perfidy is also echoed in a new PBS television
series that features the work of a far more respected source than
either Baker or Buchanan -- the Scottish historian Niall Ferguson.

In his 2006 book War of the Worlds, he damned the Allied bombings of
Germany as war crimes and dismissed the notion that it was in any sense
a "good war." These views are repeated in the PBS series of the same
name which began to be broadcast this week.

While Ferguson is, unlike the perverse Baker and Buchanan (whose
ideological roots are in the anti-Semitic "American First" movement) no
apologist for Hitler, he, too, derides the notion that the American and
the British victors were liberators because they used some of the same
tactics as their foes.

Ferguson deplores the fact that the West did all they could to help
Stalin win but, as with many of the other ironies put forward in a
series that seeks to change the way we think about the great conflicts
of the 20th century, he fails to provide a reasonable alternative to
the dilemmas faced by Churchill and Franklin D. Roosevelt.

And that lack of context is the problem with all of this revisionism.
Buchanan quotes the historian and Cold War strategist George Kennan as
asking whether the West would have preferred in 1950 to be still facing
the relatively reasonable Germany of 1913, rather than having suffered
through two world wars, and the rise of the totalitarian menaces of
Nazism and Communism. Yes, that would have been preferable. But given
Germany's dreams of hegemony, it was never an option.

Similarly, the notion that more "Munichs" in which the West would have
acquiesced to Hitler's seizure of Poland and the rest of Central and
Eastern Europe, would have left him satisfied is pure delusion and
unjustified by any serious historical research. The problem was that
the West woke up too late to the dangers of Nazism. Most people in
Britain, France or the America of the 1930s didn't understand the
stakes involved nor were they ready to fight even if they did.

But the real point of these rethinkings of history is not so much to
vindicate Hitler or even to trash the indispensable Churchill, without
whose vision and courage in the darkest moments of the war, Western
civilization may have truly perished.

Rather, the point is to call into question the far more immediate
notion that an aroused and prepared West must still be prepared to
defend its values against contemporary totalitarian foes.

Irrespective of the shortcomings of George W. Bush or the debates about Iraq,
it's hardly a secret that what Buchanan and Baker are truly gunning for
is the willingness of post-9/11 America to wage war on the Islamists
who wish to take up Hitler's war on Western democracy.

These new appeasers are just as blind -- if not malevolent -- as
their predecessors in the lead up to the war against Hitler.

Just as he blasts the opponents of appeasement for forcing the West to
fight a war against Hitler that he thinks was more trouble than it was
worth, Buchanan opposes the struggle to fight the Islamists or even to
extend American help and NATO membership to the fledgling democracies
of Eastern Europe.

But these new appeasers are just as blind -- if not malevolent -- as
their predecessors in the lead up to the war against Hitler. And that is
a point whose importance transcends the battles of the scholars and the
pseudo-scholars about history.

As Americans celebrate the anniversary of their independence, it behooves them to think long and hard about the "good war" now under attack and its importance to the history of their republic. In resisting Hitler's tyranny, Americans and those who look to America for leadership, understood that the cause of that struggle spoke
directly to the cherished principles of liberty that our founders
embraced.

Like us today, the Americans and Brits who fought World War II were
imperfect and made many mistakes. But despite a list of military
blunders and scandals that eclipse in both scale and cost those
committed by the current administration and its military, they
prevailed. The revisionists who seek to besmirch their legacy offer us
appeasement disguised as realpolitik instead of patriotism and
principle. Their message must be rejected today, just as it was a
generation ago.

The Mutation of Antisemitism
The Softball Player
How This 6 Generation Bread Baker Brought Back Israel’s Ancient Grains
Olivia Newton John’s Grandfather was a Nobel-Prize Winning Jewish Physicist
Comments
MOST POPULAR IN Israel
Our privacy policy
Aish.com Is Looking for Great Writers