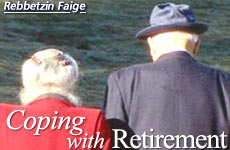 Retirement often makes people feel useless and worthless, but a change of perspective can turn that around.

My husband and I are together 24–7. He is retired and does not have a lot of interests. I try to stay busy, yet want to include him in my life and to meet his needs. Please give me your wisdom.

Retirement is a difficult passage to negotiate. For one, we live in a capitalistic society where"productivity" is the primary value, and to that end"making money" is the measure of a person's success. Given this perspective, as long as one is hustling in the marketplace, there is an illusion of a sense of purpose.

My father-in-law, of blessed memory, a very wise rabbinic counselor, advised his aging constituents to slow down, but never to retire. He maintained that for most people giving up what was their only source of gratification could throw them into a downward spiral of ultimately feeling useless and depressed.

Consider Sherri whose father had been a prominent physician. He suffered a debilitating heart attack. The practice of medicine was no longer an option for him. But medicine was all he knew. He had never cultivated any other interest in life and when the context of his single focus was no longer viable, his life fell apart and he lost his desire to live.

One of the basic underlying currents of our society's obsession and frenzied pre-occupation with"work" is the lack of perspective on death and mortality.

A comedian once commented that in our society death appears to be optional, or put another way,"he doesn't mind dying as long as he doesn't have to be there when it happens."

Since we don't have a handle on our mortality, we deal with it by distracting ourselves.

Since we don't have a handle on our mortality, we deal with it by distracting ourselves. Work, careers, making money, and being"successful" are all convenient and often desperate ways of deluding ourselves into thinking that we can escape the inevitable.

This may appear to work as long as we are marketable, in our prime years, and still have the requisite physical energy. However, when the retirement years set in, and we are bereft of our busy routine, the exits are closed; facing our mortality becomes inescapable. We find ourselves staring at a massive bridge to be crossed with no tools or mechanism in place.

In contrast to the current youth-oriented society, Judaism has always venerated its elders. It was understood that age brought with it wisdom and valuable experience. The Torah states:

Remember the days of old, consider the years of many generations; ask your father, and he will show you; your elders, and they will tell you. (Deut. 32:7)

Jews were enjoined to rise in respect before their elders, and the older the sage, the greater was the honor accorded to him. Deference to age was mandatory.

My parents, of blessed memory, use to visit us in Milwaukee twice each year. Their first stop enroute from the airport was to the home of my elderly mother-in-law. My father suffered from heart disease and the trip was not an easy one for him, but he always insisted on making this first and primary stop because, as he put it, tradition demanded that we show respect and deference to those of advanced age.

Rabbi Yaakov Kamenetsky, a luminary of our time, was once on a plane flying from New York to Israel accompanied by a grandson. The youth tirelessly propped up the great rabbi's pillow, served him drinks, and generally fussed over him the entire trip. A fellow traveler had observed the unbelievable care and attention given by the grandson with such love and reverence to his grandfather.

Near the conclusion of the flight, with awe in his voice, the traveler asked how, in our day and age, it was possible to achieve a relationship of such deference from the young to the elderly. Rabbi Yaakov responded by telling the fellow traveler that the finest moment in collective Jewish history was the revelation at Mount Sinai, the giving of the Torah more than 3300 years ago. Hence, from a Jewish perspective, the closer in proximity one is to that source and defining event, the loftier and more spiritually exalted and connected is the person.

One who sees his ancestor as descending from the ape, sees himself as the advanced model.

Therefore, explained Rabbi Yaakov, the younger generations look with great regard to those who preceded them. In contrast to that view, one who sees his ancestor as descending from the ape, sees himself as the advanced model, worthy of greater esteem than his elder. It all depends on your point of departure, Rabbi Yaakov concluded.

Inherent in this perspective is that there is more to life then the current value of"making a living." In fact, inherent in our Jewish legacy is the highest regard for family life, connecting with others, giving charity, giving of oneself, studying Torah and learning the principles of our tradition. These are the real substance of life.

If one incorporates and cultivates these time-honored values as lifetime pursuits one would not feel as diminished when the need to retire from the work force is mandated. Conversely, the singular focus on"work" to the exclusion of the cultivation of other values and pursuits can be devastating on what should be the"golden" and"harvest" years of one's life.

In coping with a retired husband, it is important to understand that he has a very difficult adjustment to make. A man's identity in our society is very closely related to his"work" and the loss of that"productive" stage in life is unsettling at best; this"stage" can be diminishing and devastating in terms of his feelings of self-worth. He needs more than ever to feel that he is still a desirable, functioning, and contributing member of the human race.

Towards this end, a wife can either"make him or break him." She needs to guard against confirming his greatest fears that his presence and his very existence are superfluous and a burden.

Here is some practical advice:

Even though he maintains that he has no interest, in deference to her wishes and desires, husband and wife could take a class together (spirituality, art, music, etc.). Encourage him to volunteer in places that would allow him to use or develop his specific talents, for example, tutoring remedial students, serving at food pantries, etc.

While excessive nudging and nagging in a spousal relationship doesn't work, it might be helpful to do some discreet inquiry and maneuvering behind the scenes. Consult a rabbi or the head of outreach centers or men's groups about your husband. Perhaps they can solicit his participation in either learning one on one, teaching, or whatever activities they might see as beneficial for him.

Family is always important, but at this stage in life it can be a soothing balm for the hurting psyche.

Family is always important, but at this stage in life it can be a soothing balm for the hurting psyche. If there are no biological grandchildren,"adopt" a grandchild. Set up time to spend in a park, playing ball, swimming, etc. These activities can infuse life with newfound energy and purpose.

Finally, I would like to share an encounter that shakes me up each time I think of it even though it actually took place more than 30 years ago. I was young and newly married. Martha, a cousin of my husband's came to visit from England. She was an elegant aristocratic woman who was ordinarily very formal and reserved in her behavior. I was, therefore, surprised to find her in my kitchen one morning. She began to tell me about Harold, her late husband. He was a wonderful, gentle, and kindly man. She was the"strong" one in the family and he always deferred to her. She ran the show and he never demanded anything from her. She went about, day-to-day busily attending to the"important" things in her life, fully expecting that some day she would focus and spend more time with Harold, who she assumed would always be there. There didn't seem to be any urgency.

Then, without warning and totally unexpectedly, one day he collapsed and died. I can still hear her sobs these many years later. "Feigele," she cried,"I can perhaps come to terms with the fact that he died prematurely and left me alone, but I am haunted and inconsolable that I took him and his presence for granted. I will never forgive myself for not taking the time to tell him how much he meant to me."

I would remind the reader that while having a husband around 24-7 can be trying, that she not lose sight of the bigger picture. Many interests in life appear to be terribly significant, but the greatest gift by far is the presence and companionship of a spouse. Indeed, we must confront our issues, but at the same time we must work hard not to allow our"busy" schedules to obscure our greatest blessing. 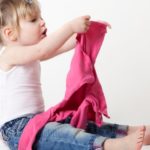 Let Your Kids Choose Their Own Clothes2 min read

Will Your Kids Know Maimonides was Jewish?1 min read

No Time to Think1 min read