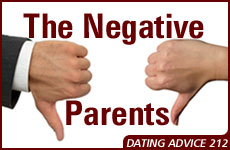 What to do when Mom and Dad reject your choice of who to marry.

I am a 25-year-old woman and started dating a 23-year-old man a few months ago. I have finished professional school and am working, and he is still a student. We are both marriage-minded, have discussed our future goals, and are committed to making this work.

The problem is that I come from a very traditional family and they do not accept the fact that I am: 1) dating someone younger, 2) that he is still in school, and 3) that I will be the one working for the first few years if we get married. They tell me practically every day that I do not know what I am getting myself into, and when I try explaining our plans they try to find every possible fault.

I have tried to deal with this situation rationally but I am starting to doubt myself and I would really appreciate your input. Is this really doomed to fail?

Parents can oppose a child's choice of a marriage partner for many reasons. Sometimes, the reasons are selfish ones, such as parents who had hoped for a child-in-law with status or wealth that would elevate their own standing in the community, or a dependent or controlling parents who resists the idea of their child asserting independence and building a life with someone else.

Perhaps they have concerns about their child's future welfare because they feel their child is too immature to marry. Perhaps they are afraid that the future spouse may not be a good provider or homemaker, displays physical or mental health difficulties that might put a strain on the marriage, or seems to have life circumstances or character flaws that may threaten their child's well-being or the marriage's stability. Sometimes it is a matter of bad chemistry, with the parents not getting along with either their future child-in-law or his/her family.

Another reason why parents may oppose marriage plans is because their child's choice of a spouse goes against their basic expectations or values, such as a person from another race or cultural background, or a large age difference between the couple, or a younger man marrying an older woman.

Sometimes these concerns have validity. For example, inter-racial and cross-cultural couples do face challenges that couples from similar backgrounds usually don't encounter, as do couples with a significant age difference. Nevertheless, many of these marriages can and do succeed.

On the other hand, in our experience your parent's particular concerns about your being two years older than the man you want to marry are not well-founded. The expectation that the man be older than the woman may have started when people married in their teens, and girls were more emotionally and physically mature than boys their own age. These differences diminish as people mature, and are no longer present by the time people enter their early 20s. When both people are in their mid-20s, an age difference of a few years in either direction should not have any effect on the quality of their relationship or its long-term success.

Similarly, your parents' discomfort with the fact that the two of you are at slightly different stages in life is also based upon old stereotypes. Would they be uncomfortable if you were still in graduate school and your future husband supported you until you finished? Of course not, because they expect the man to support the woman, and not vice versa. It also bothers them that you have begun your career and the man you want to marry won't be starting his for another two years.

But they seem to have lost sight of the big picture: that the two of you are prepared to devote your energies to building a marriage, and that at different stages of that marriage your respective contributions of time, energy, and money will change. At first, your husband will be completing his education so that he can make a better economic contribution to your life together. In a few years' time, you'll both be at relatively similar stages of career development. Later, you may earn less than him, for career-related reasons or because you choose to reduce your work hours when you have young children. That's what happens in a growing, flexible marriage.

You've probably made many of these arguments to your parents. If they can't be convinced to change their views at this point in time, you'll just have to accept that this is their opinion, understand that they have your well-being at heart, continue to show them respect, and move forward. Respecting the fact that your parents are entitled to their viewpoint doesn't mean that you have to agree to it or change your wedding plans. While the Torah tells us to honor our parents, when it comes to choosing a marriage partner, each individual is free to make his/her own choice.

You've met a man whom you believe is the right person for you to marry, and the two of you are committed to building a loving home together, even if you encounter obstacles along the way. You both are fortunate to have found each other, and that is what you must keep in mind when facing whatever difficulties in your life together.

We suggest that you have a conversation with your parents to let them know that while you understand and respect their sentiments, you are mature enough to make your own decision about marriage, and you ask them to respect that. You can explain that their constant put-downs and "warnings" will not change your mind and are only hurting your relationship with them, and you can request that they keep their future feelings to themselves. You can hope that, in time, they may realize that you really have chosen the right person to wed and accept him. (However, this may take a long time to occur, and may never happen.)

We also suggest that you spend some time with other friends and relatives who want to share your joy and are supportive of your future wedding plans. It may be that these people will play a greater role in planning and celebrating your wedding than your own parents. While it will be sad if it occurs, you will at least have a supportive environment.

We wish the two of you a great future together.

Dating maze #265 - European Investment
Who Was Josephus? The Controversial Backstory of the Famed Historian
Should I Break Up, Get Engaged or Keep Dating?
Time Is Your Precious Commodity
Comments
MOST POPULAR IN Dating
Our privacy policy