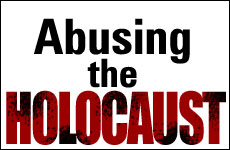 Invoking the Holocaust to bash Israel.

Kenneth Roth, the head of Human Rights Watch, opened a recent response to critics of his statements on Israel (including the author of this column) by referring to his father's "escape" from Nazi Germany. Roth often uses this theme in addressing Jewish audiences.

In a November 2004 interview with The Jerusalem Post Roth also began his defense by referring to his father's "stories of life in Nazi Germany until he fled in summer 1938." That interview took place after angry responses to a press conference at the American Colony Hotel, in which Roth publicized HRW's report ("Razing Rafah") attacking Israeli measures to stop Palestinian weapons smuggling into Gaza. The same phrases appear on Roth's personal home page and in articles by his friends.

Rosa Brooks, a former HRW employee, defended Roth in the Los Angeles Times during the fighting in Lebanon by noting that his father had "fled Nazi Germany." And Reed Brody, who works closely with Roth at HRW and led the campaign to try Ariel Sharon in Belgium as a "war criminal," refers to his own father's status as a Holocaust survivor.

Roth's (and Brody's) frequent use of this issue suggest that their parents' relationship to the Holocaust gives them special standing and immunity to criticism. Roth states that "my personal existence is very much a product of human rights abuse," implying he has a moral duty to campaign against such abuse whenever and wherever it takes place, and that Israel should not receive special treatment.

Except that Israel does receive special treatment by Roth and HRW, in a negative and highly discriminatory manner. Detailed analysis of HRW's activities by NGO Monitor, and verified independently, clearly demonstrate a highly disproportionate emphasis on allegations against Israel. During the 34-day war in Lebanon, HRW issued over 30 statements -- most of which attacked Israel. Hizbullah's illegal aggression was never mentioned, and a few words were devoted to the kidnapping of Israeli soldiers. Roth and HRW are clearly using their power to target Israel.

In this situation, the constant invocation of the Holocaust by Roth and his defenders is unconvincing and odious.

Nazi Germany's mass murder of the Jewish people in no way excuses or justifies HRW reports that accuse Israel of "indiscriminate strikes on civilians," "collective punishment" and "war crimes" - the same offenses committed by the Nazis.

In the Kana incident of July 2006, HRW's report, which falsely accused Israel of killing 56 civilians in this Southern Lebanese village, was repeated around the world; by the time HRW issued a partial correction, the damage was irreversible.

If a Jew and son of a Nazi victim can use such terms, then others who follow are immune to accusations of anti-Semitism.

The experiences of Roth's father also did not justify HRW's attacks on Israel in 2002, when it inaccurately labeled Israeli actions to end Palestinian suicide attacks from Jenin as "war crimes," paving the way for other NGOs, as well as in news reports and editorial cartoons, to use the same language to promote a pernicious analogy between Israel and the Nazis, particularly in Muslim countries and Europe.

If a Jew and son of a Nazi victim can use such terms, then others who follow are immune to accusations of anti-Semitism. (Norman Finkelstein also uses this strategy, linking the fact that his parents are survivors to his radical anti-Israel campaigns and repugnant references to "the Holocaust industry.")

Maintaining a calm and emotion-free demeanor to argue the case is difficult when the memory of the Six Million murdered by the Nazis is used to bash Israel. For the vast majority of Jews who escaped or survived the Nazis and either came to Israel after the war or strongly support Israel's right to defend itself, these comparisons are particularly offensive. One of the major lessons that others draw from the Holocaust is the need for Jews to be able to defend themselves and never again to be vulnerable to such murderous attacks.

In contrast, after again invoking his father, Roth declares "Among the lessons that I drew from his stories was that military force alone is not enough to combat the world's evils."

Beyond the triteness of this statement (no intelligent person believes in "military force alone"), the implication, once again, is that Israel is violating the "lessons" of the Holocaust by using force to defend itself.

This attempt to appropriate the "lessons of the Holocaust" has also destroyed the 1948 Universal Declaration of Human Rights, written in response to German racism and mass murder. This document has been exploited for obsessive anti-Israel campaigns, such as the NGO Forum of the infamous Durban conference on Racism in 2001 (the HRW delegation was headed by Reed Brody), and the UN Human Rights Council. Roth claims to oppose the excesses of the UNHRC, but last year he condemned Israel and the US for warning that this would be the outcome.

The impact goes far beyond the fringe views of a few individuals; Roth heads a very powerful organization with an annual budget of $50 million. In addition to demonizing Israel and undermining human rights, this power furthers efforts to rewrite and distort the Holocaust. For this, there is no atonement.

This article originally appeared in the Jerusalem Post. [link to]

The writer directs the Program on Conflict Management at Bar Ilan University. www.ngo-monitor.org

PROF. GERALD STEINBERG is director of the Conflict Management Program at Bar-Ilan University, a fellow of the Jerusalem Center for Public Affairs, and editor of www.ngo-monitor.org. He completed his doctorate in international relations at Cornell University, and his analyses on the Arab-Israel conflict, including strategic and diplomatic dimensions, have been published in journals such as Survival, Comparative Politics, Israel Affairs, Security Dialogue, and Middle East Quarterly. He serves as an adviser on foreign and defense policy to the Israeli government, and is currently writing a book on the political agendas of the human rights NGO network.

America Standing Alone and Proud at the UN

The Gaza War in 5 Minutes

Our Culture of Hate
Korach 5782: Visit to Lift the Spirit
That Time The Ivy League Found A Way To Limit Jewish Enrollment
Would You Rather Be Right or Happy?
Comments
MOST POPULAR IN Israel
Our privacy policy